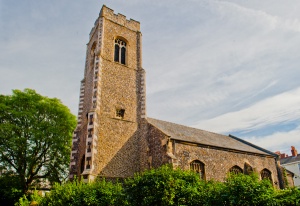 This city centre church dates to the middle of the 15th century, though there was a church on the site since sometime before 1200. During the late medieval period, this area was home to some of Norwich's wealthiest wool merchants, and the quality of memorials and interior furnishings reflects this prosperity.

Around 1451 the nave of that early medieval church was rebuilt, followed in 1513 when aisles and chapels were added. One of the patrons of the 15th-century rebuilding was William Norwich, Mayor in 1461, whose memorial brass is in the Chapel of St Mary and All Saints, near the Jannys tomb.

In 1514 the nave was raised, with a clerestory flooding the interior with light. This clerestory is built of freestone, which stands out against the flint base.

You enter by way of a south porch, but before passing through the porch, look up at the spandrels on either side of the opening. One side is carved with a likeness of St George being armed by angles, the other with a depiction of the Annunciation. 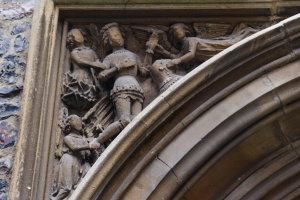 The interior has a definite Georgian feel, with an 18th-century pulpit, and a west gallery (1802). The pulpit is toped by a sounding board and decorated with an inlaid panel on the front. The open benches are Georgian, cut down from the original box pews.

The attractively carved 14th-century font is not original; it was brought here from St Saviour's church when it was made redundant. The base of the font is carved with deliciously grotesque, grinning beasts.

One of the most enjoyable features of St George's is the large number of historic memorials. By far the most interesting of these is the terra-cotta tomb chest of Robery Jannys in the north chapel. This is the only terra-cotta memorial in the city.

Though worn, the carving on this memorial is of the highest quality, probably carved by the same artisan who created the extraordinary Bedingfield memorials at Oxburgh. The base of the chest is divided into three panels separated by pilasters. Among the designs are Jannys's merchant's mark and the arms of the Grocer's company.

Robert Jannys (1480-1530) was a successful grocer and twice mayor of Norwich (1517 and 1524). He gave generously to Norwich Guildhall, and to this church. In his will he left £350 to the poor, a huge sum at the time. Perhaps he could afford the bequest, as his will does not mention any children to inherit his wealth. 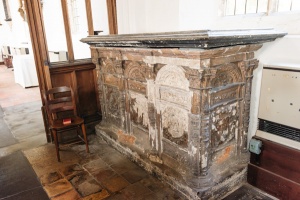 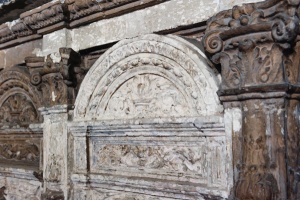 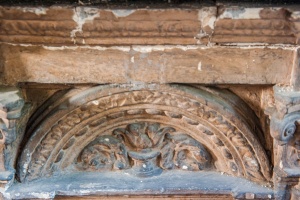 Carving detail on the Jannys tomb

Another interesting memorial is to another Norwich mayor, Philip Meadows (d. 1772), and there is an earlier wall monument to Thomas Pindar (d. 1722) with a reclining cherub holding a goblet balanced on one knee.

A final memorial worth mentioning is a fairly plain plaque to landscape painter John Crome (1768- 1821) in the south aisle. Crome was a founder of the 'Norwich School' of artists. He was born in St George Tombland parish nearby, and apprenticed to a sign-painter. In 1798 he was hired as a drawing master for the Gurney family of Earlham Hall, where one of his pupils was Elizabeth Gurney, later to become famous as prison reformer Elizabeth Fry.

Crome helped found the Norwich School in 1803, to promote the work of local artists, primarily landscape painters. He died in 1821 (in debt to Gurney's Bank to the tune of £145), but the memorial was not erected until 1868. It was designed by Suffolk sculptor John Bell, and is embellished with an artist's pallet and brushes. Crome's bust is set beneath a laurel wreath, a symbol often used to commemorate literary and artistic notables.

The church has very limited opening hours. When we visited that was daily between noon and 2pm. It is worth visiting, though; the number and quality of the memorials are impressive, especially the Jannys tomb, which, though quite worn, is really very impressive. It's a pity terra-cotta doesn't wear better! 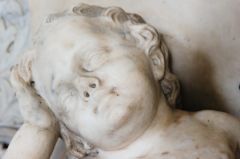 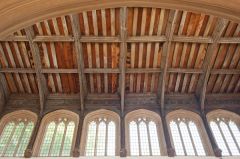 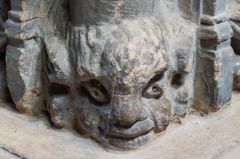