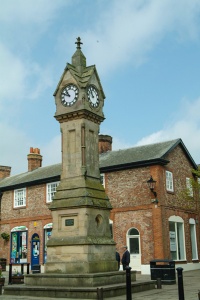 Thirsk is a very attractive market town that grew up between two important medieval roads on either side of Cod Beck (indeed, the name 'Thirsk' may derive from 'settlement by the river'). Old Thirsk is on the east side of the beck, where the old road from York to Yarm (Long Street) runs beside the water.

Between the road and the beck is St James's Green, where a cattle market was held as early as the 14th century. The Green takes its name from a 12th-century chapel (now vanished) dedicated to St James.

New Thirsk is on the west side of the beck, where the road from Topcliffe to Northallerton used to run. There are few buildings older than the 17th century, though several attractive inns from that period cluster around the market place.

The Fleece Inn dates to the early 18th century, and the attractive Crown Hotel was built in 1682. The Three Tuns, though it has a Georgian frontage, may date in parts to the 17th century. The centrepiece of the market place is the Market Clock, erected in 1896 to commemorate the 1893 wedding of the Duke of York to Princess Mary of Teck (later King George V and Queen Mary). 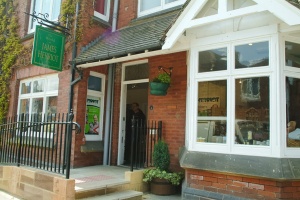 The World of James Herriot

The green may look peaceful now, but it has seen historical drama; the Earl of Northumberland was said to have been murdered under an elm tree here in 1489, and John Wesley preached here in 1763.

There was a 12th-century castle in Thirsk, built by Robert de Mowbray. A later Mowbray, Roger, defended Thirsk Castle aginst Henry II in 1173, but the castle was destroyed by Henry in 1176. Traces of the moat can be seen off Castlegate. Thirsk is most famous today as the home of the author and veterinarian James Herriot (Alf Wight).

James Alfred "Alf" Wight was born in Sunderland in 1916, and raised in Glasgow. He came to Thirsk in 1940, where he worked out of a veterinary surgery at 23 Kirkgate. In 1970 Wight published the first of his 8 full length books telling of the life and misadventures of a fictional vet named James Herriot.

The gentle, and often humourous books evoke the traditions and foibles of life in the Yorkshire Dales, and proved enormously popular with a world-wide audience. Despite his success as an author, Wight continued practicing as a veterinarian. His former surgery is now The World of James Herriot, an award-winning museum dedicated to Wight's life and writings. Alf Wight died in 1995. 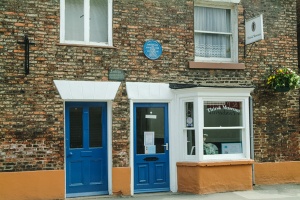 Almost directly across from The World of James Herriot on Kirkgate is an unobtrusive building where Thomas Lord was born in 1755. Lord is famous as the founder of Lord's Cricket Ground in London. The house now houses Thirsk Museum, with exhibits of local history and cricket ephemera.

The parish church of St Mary's is a wonderful medieval building, full of historic interest. Even before you get in the door you encounter local history; look at the frame of the porch and you can see long grooves worn in the stonework. These grooves were apparently made by local men sharpening their weapons before marching into battle in the Civil War.

The church is almost entirely a product of the 15th century, but sections of the tower may be as old as the 12th century. The east window of the south aisle has large fragments of medieval stained glass gathered from other windows in the church.

A short walk leads from Thirsk to Sowerby, where the church is particularly attractive.

More self catering near Thirsk

More bed and breakfasts near Thirsk

Self Catering near Thirsk