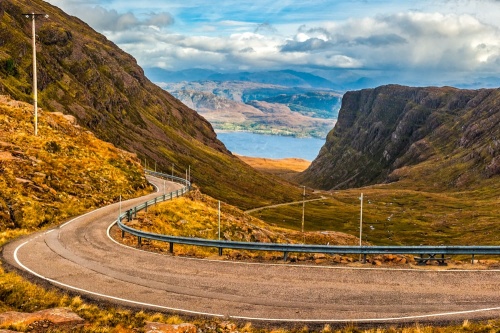 Can a twisting, winding mountain road be a tourist attraction? When it comes to the Pass of the Cattle, the answer is yes. This iconic single-track Highlands road, known as Bealach na Bà in Gaelic, links Loch Kishorn to the isolated village of Applecross. It is the third-highest road in Scotland and without doubt one of the most beautiful drives in Britain.

It is the closest thing in Britain to an alpine pass, and from the top you can get incredible panoramic views across Wester Ross and westward to the Isle of Skye and the Hebridean islands.

Be aware that the Pass can be closed in winter due to snowfall. There are snow gates at both ends of the Pass, and it is not unusual for the route to be closed for several weeks at a stretch in winter. 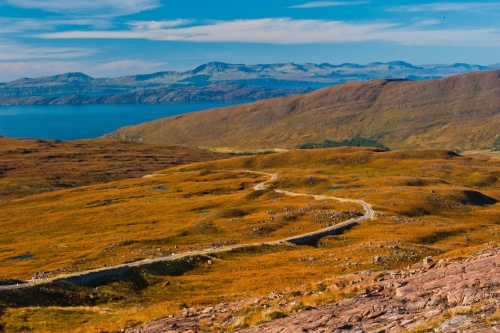 The view west towards Skye

To reach The Pass of the Cattle, take the A896 from Lochcarron in the direction of Shieldaig. Just past the northern tip of Loch Kishorn, a minor road branches off, heading west towards Applecross.

Please pay attention to the warning signs that advise strongly against anyone driving a motorhome or towing a caravan attempting the Pass. The route is steep and winding, with numerous switchbacks. Every year, inexperienced drivers of long vehicles are stuck on the switchbacks and block the route, t=requiring a rescue by local breakdown services. If you are driving a motorhome any longer than 18 feet, we strongly advise you against trying the Pass!

The road to Applecross is single-track for the entire way, with signposted passing places. It starts almost t sea level, then rises 626m over the course of 9.1km, with the steepest gradient hitting 20%. The average gradient is around 7%. 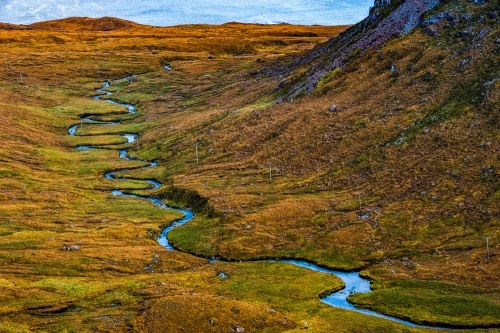 Allt a' Chumghaing flows down to Loch Kishorn

The route rises steadily, with numerous switchbacks, to the summit at 2054 feet (roughly 626m). Along the way, you can see several dramatic waterfalls, as the road loosely follows Allt a' Chumghaing, beneath the rocky heights of Meall Gorm.

Remember that though there are passing places, you can't guarantee that there will be a handy one in front of you when you see someone coming from the opposite direction. You must be prepared to reverse into the nearest passing place. Please do NOT attempt the drive if you are wary about reversing on a difficult road with steep slopes and switchbacks!

Now, in case that sounds too terrifying, I should add that I've driven over the route twice, and had no problems. Even so, I wouldn't advise trying it at night! 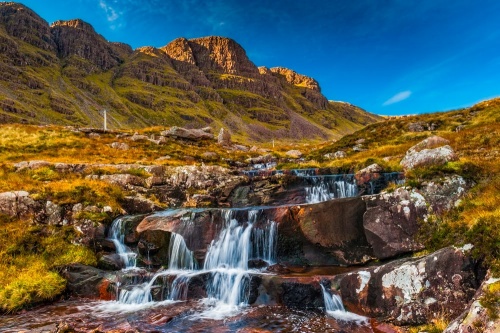 At the summit there is a small parking area to the left of the road (westward bound). From the parking area, you get staggeringly beautiful views west over the Applecross Peninsula to the Isle of Skye and beyond.

If you fancy an even better view, walk back a hundred yards (east, towards Loch Kishorn) until you come to a rough track that climbs roughly 1.5km (1 mile) to a signal tower.

In recent years the state over the summit of the Pass of the Cattle has been a matter of concern for locals. The route's inclusion in the popular North Coast 500 driving circuit has increased traffic and made the Pass a target for motoring clubs. With the increase has come increased wear and tear. There are now more breakdowns and more congestion along the route. This increased traffic has damaged the road surface. 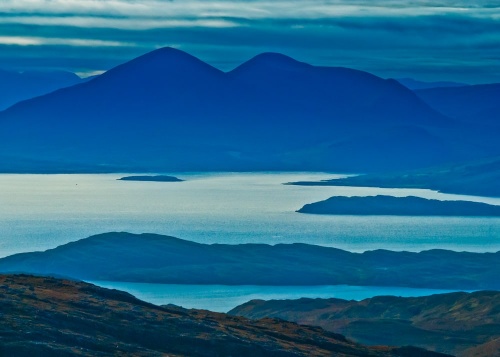 The route to Applecross was begun in 1818, and completed in 1822, with the Mackenzie lairds of the area paying one quarter of the cost. Accounting for inflation, the total cost of the road was over £500,000 in today's terms. The original road surface was rough gravel, which made it very difficult to clear in winter. Tarmac was laid down in the 1950s.

The Pass of the Cattle was used as a location in the filming of the TV series Hamish Macbeth, and in the 1953 film Laxdale Hall, a romantic comedy starring Ronald Squire and Kathleen Ryan (known as Scotch on the Rocks in the US). 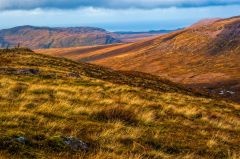 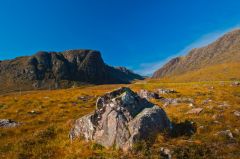 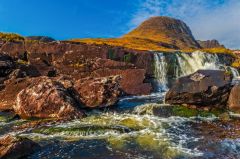 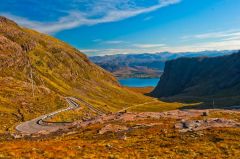 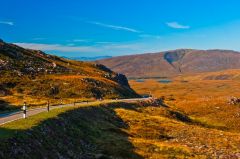 Nearby accommodation is calculated 'as the crow flies' from Bealach na Ba (Pass of the Cattle). 'Nearest' may involve a long drive up and down glens or, if you are near the coast, may include a ferry ride! Please check the property map to make sure the location is right for you.