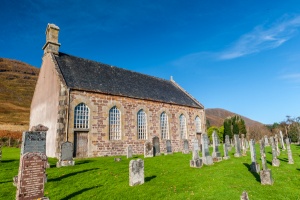 The area around Applecross played an important role in the early history of Scotland and the spread of Christianity in Britain. The most obvious relic of that heritage is the church at Clachan, set in a large graveyard that houses a 15th-century chapel and a striking 8th-century carved stone.

The church we see today was built in 1817, but it stands on the site of a much older building, and that, in turn, was founded near a 7th-century monastery established by the Irish saint, Maelrubha.

In the year AD 671, the Irish saint Maelrubha sailed from Bangor to the north-west coast of Scotland to establish a monastery. Maelrubha, a native of Londonderry, landed at Abercrossan, now called Applecross. Here he founded a monastery and declared the land within a six-mile radius of his monastery a site of sanctuary. The peninsula was dubbed A' Chomraich in Gaelic, which translates as 'The Sanctuary'.

Maelrubha seems to have spread Christianity over a wide area of northern Scotland, to Lochcarron and into Easter Ross, and possibly north into Sutherland. At Skail, in Strathnaver, the Red Priest's Cross is said to mark the site of his murder by Vikings.

That association is not universally accepted, but what is known is that the saint made his base at Applecross for 59 years. No trace of the original monastery remains, but Maelrubha's heritage lives on. He is thought to be buried in an unmarked site within the churchyard at Clachan.

Much more obvious to visitors is the large carved cross just inside the churchyard gate. The stone was originally used to mark the grave of Ruaraidh Mor MacAogan, Abbot of Applecross, who died in 801.

One version of MacAogan's death says that Vikings sacked the Applecross monastery, and the Bishop retreated to Bangor. On his death, his body was brought back to Applecross for burial. Local tradition says that his body floated ashore on the carved slab. The stone has an incised cross, which appears unfinished. 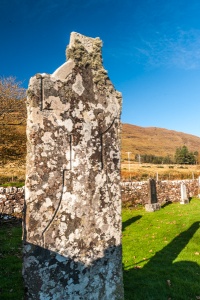 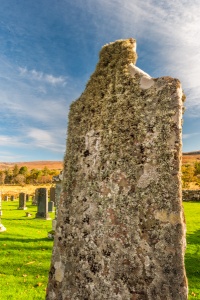 Reverse face of the cross 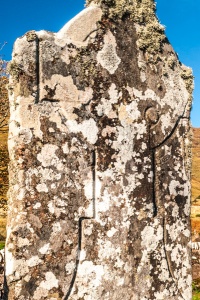 Closeup of the carved cross

The monastery was in existence for 150 years, but records are scarce, perhaps because of Viking raids but perhaps also because residents used stones from the old monastic buildings for other building projects. And that is a shame, for you could make a good case that Applecross was second only to Iona in terms of its influence over the spread of Christianity in Scotland, and the importance of its early heritage.

The church is a lovely building, and though not of great age itself, it is part of a landscape that simply exudes a sense of antiquity. It is not used for regular worship but is used for weddings and special community events. It is open daylight hours and makes a lovely combined visit with the Heritage Centre.

To the east of the church stands a small roofless building, now covered with ivy. This dates to the 15th century and was later used as a burial vault by the Applecross family.

Overlooking the churchyard is the Heritage Centre, run by the Applecross Historical Society, with a wonderful display of historic documents, photographs, artefacts, and genealogical information on the area. There are several fragments of 8th-century Celtic crosses on display, another indication of the long and rich cultural heritage in this relatively remote area.

Below the road is the Spout well, fed from a holy well higher above on the slope. The holy well is associated with Maelrubha and his monastery. 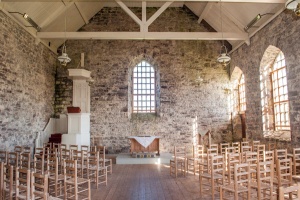 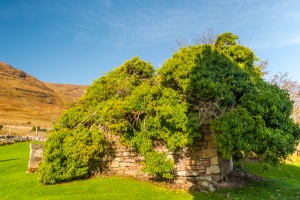 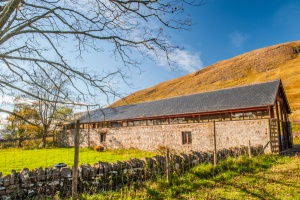 Nearby accommodation is calculated 'as the crow flies' from Clachan Church, Applecross. 'Nearest' may involve a long drive up and down glens or, if you are near the coast, may include a ferry ride! Please check the property map to make sure the location is right for you.