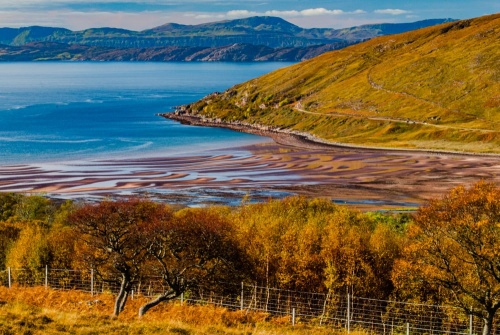 Applecross is a remote village in Wester Ross, on the west coast of the Applecross Peninsula, looking across the Sound of Raasay to the Isle of Skye. The name Applecross has historically been used to refer to both the settlement and the entire peninsula, which is almost wholly contained within the vast Applecross Estate.

Applecross was one of the first areas of Scotland to be settled, but it remained remote and difficult to access by land until the coastal road from Shieldaig was completed in 1982.

Until then, visitors had to come by sea, or over the difficult Bealach na Ba (the Pass of the Cattle), a drove road that twists and winds like an Alpine pass and reaches over 2,000 feet above sea level, making it one of the highest mountain passes in Britain (depending on which criteria you use, the Pass of the Cattle is the seventh highest mountain pass in the UK, at 626m, or 2054 feet).

The peculiar name has nothing to do with apples or crosses; it is a modern mangling of old Pictish and Gaelic terms for the confluence of the River Crossan. The village is no more than a collection of houses along Shore Street, known locally as simply 'The Street'. The wider Applecross community, however, takes in the entire peninsula of scattered settlements. 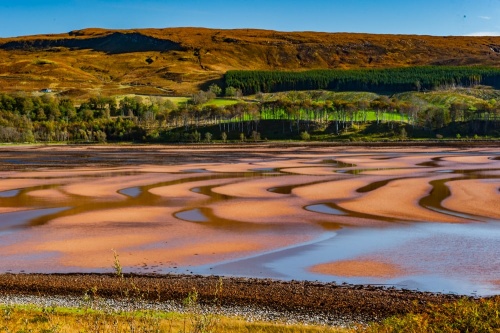 Applecross Bay from the north

The settlement grew up at the mouth of the River Applecross where it empties into a wide, sandy bay facing west towards the Inner Sound, with Raasay and the Isle of Skye in the distance.

Traditionally, Applecross is said to have been settled by the Irish missionary St Maelrubha (Mael Ruba), who arrived on the west coast of Scotland in AD 671. He established a monastery here at Applecross in AD 672, in territory then controlled by the Picts. Maelrubha served as the monastery's first abbot and lived to be over 80, a remarkable age for the period.

The Gaelic name for the settlement was A' Chomraich, or 'The Sanctuary', referring to an area of sacred ground surrounding the monastery that was marked by crosses. A fragment of one of these boundary crosses survives in the grounds of a farm at Camusterrach, several miles south of Applecross village.

From his base at Applecross Maelrubha spread the Christian message across Wester Ross and into what is now Easter Ross. He died around AD 722, but the exact circumstances of his death are a matter of confusion. 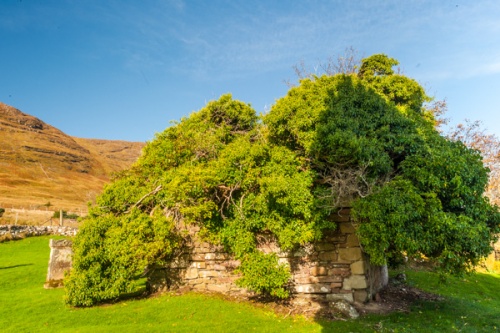 From his base at Applecross Maelrubha spread the Christian message across Wester Ross and into what is now Easter Ross. He died around AD 722, but the exact circumstances of his death are a matter of confusion.

One tradition says that he was killed by raiding Vikings at Teampull, in Strathnaver, where his grave is marked by a roughly carved stone. That seems unlikely, as the earliest record of a Viking attack on Scotland comes from the 790s.

Contemporary Irish accounts say that Maelrubha died peacefully at Applecross, where he was buried. If so, his grave site is a mystery. What is not a mystery is the site of Maelrubha's church, which stood where Clachan Church now stands, north of the village centre. 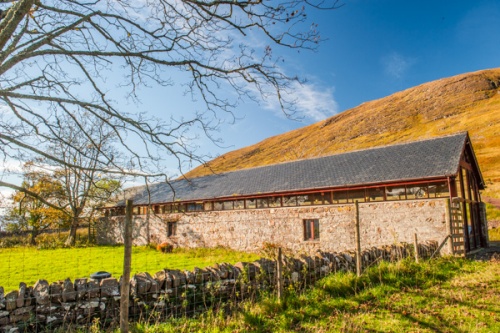 You can learn more about St Maelrubha and the fascinating early history of the region at the Applecross Heritage Centre, built just outside the burial ground of Clachan Church on a site donated by the Applecross Estate.

A series of interpretive displays tell the story of St Maelrubha and the first settlers in Applecross, the Picts and Scots, the Celtic Church, Highland clans, the devastation of the Highland Clearances, and modern Applecross. The Heritage Centre has fragments of 8th-century Celtic crosses on display to visitors. 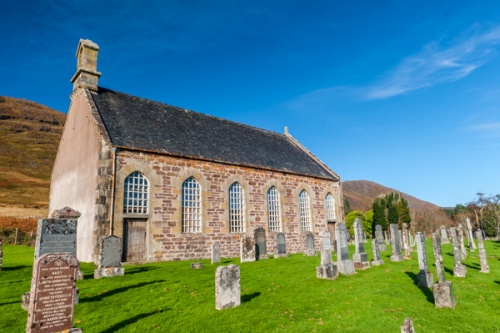 The church we see today was built in 1817 on the site of a much older building which, in turn, was built on or near the site of St Maelrubha's monastery.

Within the burial ground are two historical treasures; a roofless 15th-century chapel, now in ruins, and Macaogan's Cross, a striking 9th-century cross slab that marks the grave of Ruaraidh Mor MacAogan, Abbot of Applecross, who died in AD 801. 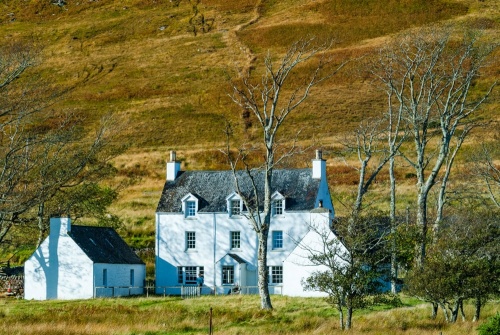 Near Clachan Church is Applecross House, begun in 1675 for the Mackenzie family and was extended several times over the following centuries. In the early 20th century it was purchased by the Wills family, who made their fortune in the tobacco trade. The historic house stands beside a 19th-century walled garden, now fully restored. The garden is home to a popular cafe and award-winning restaurant.

If Applecross village has a heart, it is probably the Applecross Inn, built on Shore Street in the early 19th century. By the early 20th century it was known as The Temperance Hotel, and the hotelier, Alexander MacRae, also served as the village postmaster and shopkeeper. The hotel's name was changed in the 1950s.

Until quite recently the Inn's license only allowed it to sell alcohol six days a week. Seven-day trading was not instituted until the 1980s. The inn has gained a reputation for fine dining and has won several food-and-drink awards.

The Applecross Peninsula is part of the popular North Coast 500 route, a coastal driving route that begins at Inverness and loops around northern Scotland taking in some of the country's most spectacular coastal scenery along the way.

Applecross is one of those places that just exudes a sense of antiquity and timeless beauty. I've been several times, and can't wait to return. 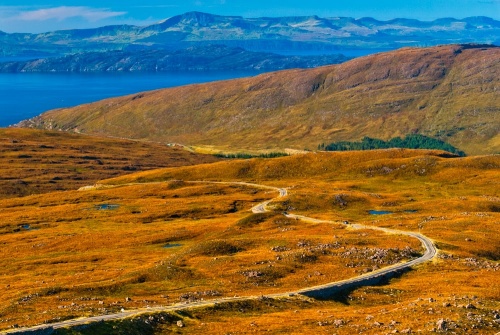 Applecross from the Pass of the Cattle

Really, read that warning again. The hairpin turns that wind up and down the Pass are too tight for campers and large lorries to navigate safely. Rescue crews really don't want to be called out to clear the road -- again -- when a large vehicle gets stuck halfway around a bend.

Now, that said, I've been over the Pasas several times -- in a small family car -- and it is one of the most incredible driving experiences in Britain. The scenery is simply breathtaking. 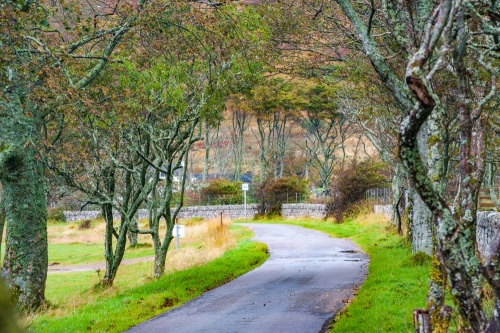 The single-track road through Applecross

If you have the time, I recommend visiting Applecross by coming over the Pass of the Cattle, then following the coastal road north to loop around the northern end of the Applecross Peninsula towards Sheildaig and then back south through Glen Shieldaig to the bottom of Bealach na Ba. This circular route is without equal in Britain for scenic beauty.

There is public parking in Applecross village, near the Inn, and partway along the bay, where there is also a picnic site. A third parking area is beside the road on the northern edge of the bay, with glorious views across the reddish sands of the bay to The Street.

For its size, Applecross has a surprising array of businesses catering to visitors. There is the Inn, of course, mentioned above, and a campsite, several self-catering cottages, a hostel, a photography gallery, cafe, restaurant, smokehouse, and a tour guide company offering kayaking and mountaineering adventures.

Nearby accommodation is calculated 'as the crow flies' from Applecross. 'Nearest' may involve a long drive up and down glens or, if you are near the coast, may include a ferry ride! Please check the property map to make sure the location is right for you.