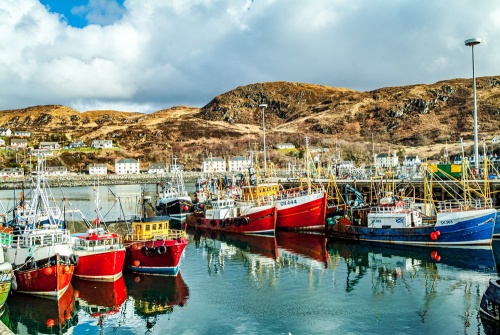 Mallaig is a fishing village and port at the western end of the famous 'Road to the Isles', looking across the Sound of Sleat to the Isle of Skye. A busy ferry service links Mallaig to Armadale on Skye's Sleat Peninsula.

The name is thought to come from the Old Norse word 'vik', meaning a sandy bay.

Historically, Mallaig was part of a buffer zone between the Norse and the native Picts and Scots before becoming the eastern part of the Lordship of the Isles.

The fishing port we see today was the work of one man, Thomas Fraser, 1st Baron Lovat, who in the 1840s established a planned village around the harbour and encouraged his tenants on the North Morar Estate to give up their crofting lives and turn to fishing.

His scheme was successful, to the point where Mallaig is now the busiest fishing port on Scotland's west coast. Once a centre for the herring fishery, Mallaig is known today for its oak-smoked kippers, but more economically important is the prawn fishery, for Mallaig is home to the largest prawn catch in Europe.

In addition to the bustling commercial fishing industry, Mallaig is a very popular centre for pleasure boating, with a full-service marina.

Until improvements in transportation in the 20th century, this was the least visited areas of Scotland due to practically non-existent road networks. Mallaig, like much of western Lochaber, was only realistically accessible by boat.

The arrival of the railway from Fort William in 1901 made Mallaig easily accessible to visitors for the first time in its history, and visitors are still drawn to the area to experience the beauty of the land and seascape.

The railway line from Fort William is part of the world-famous West Highland Railway, which has several times been voted the most scenic railway line in the world. Mallaig rail station is the western terminus of the Jacobite Steam Train service.

Now, the A830 road parallels the route of the railway line and makes Mallaig even easier to reach. 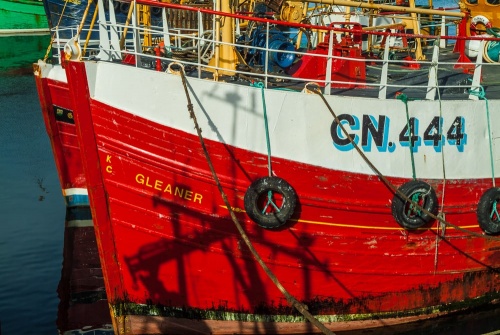 A fishing boat in the harbour

You can learn about the rich history of the Mallaig and the West Lochaber area in the modern Heritage Centre, located beside the railway station. The Heritage Centre looks at Mallaig's development as a fishing port and the area's strong links to Bonnie Prince Charlie and the Jacobite rebellion of 1745.

Operators at Mallaig pier offer boat charter service as well as wildlife and fishing excursions. Taking one of the wildlife cruises gives you a chance of seeing some of the dolphins, porpoises, seals, minke whales, and basking sharks that regularly frequent the waters around Mallaig.

Mallaig offers a full range of visitor facilities including a bank, leisure centre, post office, restaurants, supermarket, and independent shops of all sorts.

South of Mallaig is Morar, where the pristine sandy beach was used as a setting for the popular film 'Local Hero'. Inland is Loch Morar, where parts of the Liam Neeson movie 'Rob Roy' were filmed. Loch Morar is the deepest freshwater loch in Europe, reaching over 1,000 feet deep in places (over 305 metres)

One of the best ways to enjoy the spectacular local scenery is to take the Mallaig Circular, a walk that starts at the East Bay car park and climbs to provide wonderful views of the harbour below and over Loch Nevis to Knoydart. The entire circuit is just 3km long (about 1.75 miles) and should take no more than 1.5 hours at most.

Mallaig is one hour by road from Fort William, via the A830. On the way, you pass the Prince's Cairn by the shore of Loch nan Uamh, where Bonnie Prince Charlie landed to launch his bid for the throne in 1745 and where he took ship to make his final escape abroad after the rebellion failed.

Or, you can arrive in style on the Jacobite Steam Train from Fort William, an 84-mile round trip that takes you over the famous Glenfinnan viaduct.

Armadale Castle Gardens and Museum of the Isles - 8.3 miles (Museum)

Nearby accommodation is calculated 'as the crow flies' from Mallaig. 'Nearest' may involve a long drive up and down glens or, if you are near the coast, may include a ferry ride! Please check the property map to make sure the location is right for you.

More self catering near Mallaig

More bed and breakfasts near Mallaig

Self Catering near Mallaig