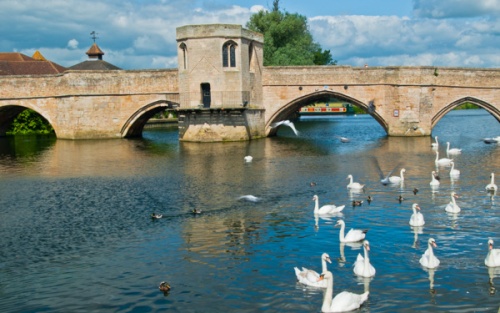 Swans on the River Great Ouse at St Ives

The town of St. Ives began life as "Slepe", which means "muddy" in Anglo-Saxon! That says all that needs to be said about the town's location on the edge of the Great Fen.

The name was changed to St Ives after the body of St Ivo was found near here in AD 1001. A local farmer ploughing his fields unearthed a stone coffin, which was identified confidently by church authorities as that of St Ivo, a native of the town.

The priory of St Ivo was founded hastily on the spot where the saint's body was found and pilgrims flocking to the spot made donations to the priory. 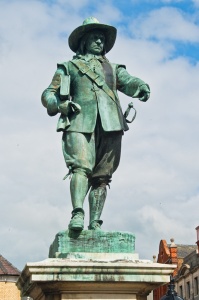 The influx of travellers necessitated a bridge across the Ouse, which was built of wood. In the early 15th century this bridge was rebuilt in stone, and a two-story chapel was added in 1426. After the dissolution of the priory under Henry VIII, the former prior was allowed to live in the chapel and it became a house.

The chapel had several more floors added in 1736, but these were removed in 1930. Today the bridge and chapel are the most recognizable symbols of this pleasant town.

For 5 years between 1631 and 1636, Oliver Cromwell lived in St Ives, where he attempted to make a go of being a yeoman farmer. A minor inheritance relieved Cromwell of the need to till the soil, and he moved to Ely. Despite this, the town retains a strong identity with Cromwell. A statue of the Lord Protector stands in the Market Place.

The Norris Museum on The Broadway tells the story of the no-longer-extant county of Huntingdonshire. See museum details here.

Note:
Don't confuse this St Ives with the coastal town of the same name in Cornwall! We do, however, have an article on St Ives, Cornwall, as well... 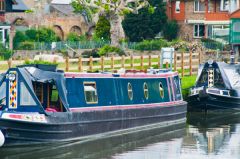 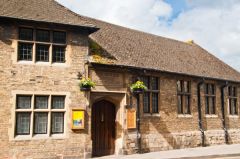 More self catering near St. Ives