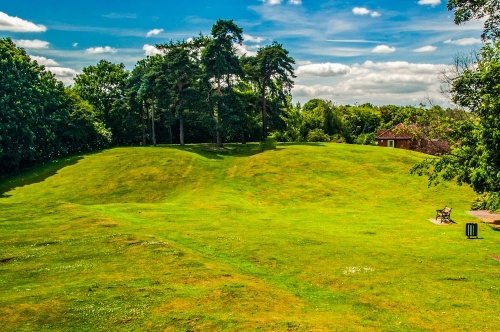 Huntingdon Castle was built in 1068 as part of William the Conqueror's attempt to exert Norman control over his newly-won kingdom. It was built on a hill overlooking the River Great Ouse to a traditional Norman motte and bailey plan.

William the Conqueror chose a site beside an existing Saxon burh, or fortified town, that had been established beside a busy river crossing. His workmen tore down 20 existing Saxon houses to make way for the earthwork and timber fortress.

At the heart of the castle was a motte, or earthen mound, topped by a timber palisade that probably helped protect a timber tower, or keep. Extending around the motte was the bailey, an enclosure defended by earthwork perimeter walls. This early Norman bailey was extended at some point over the next century.

within these two bailey enclosures would have stood timber buildings such as a brewhouse, kitchen, bakehouse, and stables. We know from the historical records that there was a chapel within the bailey as well, a fact that was born out by the discovery of medieval skeletons, suggesting the presence of a burial ground.

The castle passed through the female line to King David I of Scotland, who married William the Conqueror's granddaughter. King David supported Queen Maud in The Anarchy that followed the death of Henry I of England, and Huntingdon Castle was damaged in that bitter and bloody struggle between Queen Maud and King Stephen.

When the dust of The Anarchy finally settled, David's son, Prince Henry, paid homage to King Stephen, who responded by granting him the Huntingdon estate in addition to the castle.

In 1173 King Henry II's sons Richard, Henry, and Geoffrey rebelled against their father, aided by their mother, Eleanor of Aquitaine. King William the Lion of Scotland supported the rebellion, hoping to seize lands in northern England. 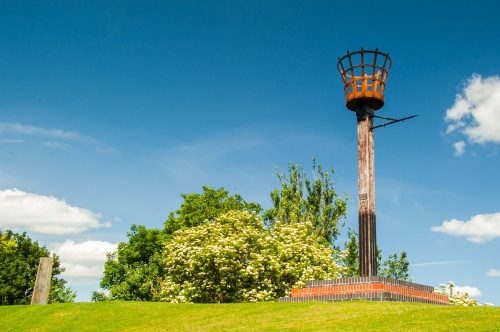 The Millennium Beacon, on the castle earrthworks

We know that the chapel survived until at least 1327 when it was granted to nearby Huntingdon Priory.

Over time the remaining civic functions were transferred to Cambridge Castle, and Huntingdon's fortress was left to decay.

During the English Civil War the castle site was garrisoned by Parliament. The medieval defences were transformed to create an earthwork artillery battery. After the war, the castle was once again allowed to decay.

In the late 18th century a windmill was erected inside the earthworks, but this was pulled down in 1875. Building the railway line to Huntingdon further damaged the earthworks, as did the construction of the modern A14 road.

Today, nothing remains beyond obvious turf-covered earthworks and mounds. Indeed, the most striking feature within the castle is not medieval at all, but a beacon erected to celebrate the Millennium in 2000.

Note: don't confuse this Huntingdon Castle in Cambridgeshire with the castle of the same name in County Carlow, Ireland! Also, don't confuse it with Huntington Castle (note the letter T instead of the D!) in Herefordshire.

Huntingdon Castle is sometimes known as Castle Hills, and you may see it marked on maps by this name.

The Huntingdon Castle site is very easy to access. It is immediately west of the B1044 bridge that links Huntingdon to Godmanchester, off Castle Moat Road (the B1514). The nearest public parking is the Princes Street car park, a simple 5-minute stroll away.

Alternatively, you can park at Bridge Place, on the Godmanchester side of the river, and walk over the pedestrian bridge to the Huntingdon bank. The site is also easily reached on foot from anywhere in the town centre.

More self catering near Huntingdon Castle