HERITAGE HIGHLIGHTS:   One of the principal castles of the powerful Sinclair family for over 300 years 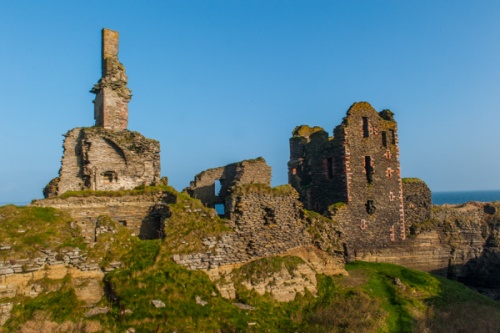 The imposing ruins of this once-mighty castle cling to the rocky cliffs of Caithness, at the southeastern end of Sinclair Bay, near Noss Head. Much of the castle's history is shrouded in mystery, but our best guess is that it was begun in the late 14th century by the Sinclair's, Earls of Orkney and later to become Earls of Caithness. 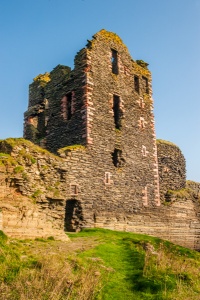 Very little remains of the 14th-century castle beyond a few foundation walls. By the middle of the 15th century, the Sinclairs began to expand their original fortress, and expansion continued for the next 200 years, until the castle became a symbol of Sinclair power and prestige in the north of Scotland.

Much of the building was carried out by William, 2nd Earl of Caithness (1480-1513), who built the curtain walls with ranges of domestic buildings, making Girnigoe ready for use as his principal residence. Unfortunately, Earl William died at the Battle of Flodden in 1513 Work was completed by his son, John Sinclair, the 3rd Earl, who added more domestic buildings in the outer ward.

The 4th Earl made Girnigoe his chief residence and rebuilt the tower house at the centre of the fortress.

The 5th Earl of Caithness, 'Wicked George' Sinclair, rebuilt large parts of the earlier castle in the early 16th century. The Earl was constantly bickering with his neighbours, particularly with Clan Gunn. The conflict culminated with an attack by the Earl of Sutherland in 1588, but the defenders of Castle Girnigoe withstood a 12-day siege before the attackers withdrew. 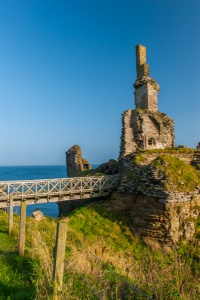 The bridge and gatehouse

The 'Wicked Earl' had to mortgage his estates to pay for his improvements at Girnigoe, and eventually he had to flee to Orkney to escape his creditors. The 6th Earl decided to make his principal residence at Thurso, and Girnigoe became less important.

When Oliver Cromwell's men pushed into Caithness in 1651 they used Girnigoe as their base, and the castle suffered damage as a result. After the English troops left, the 6th Earl sold the land and his Earldom to a cousin, Sir John Campbell of Glenorchy.

The former Earl continued to live at Girnigoe until his death, however, at which point the Campbells and Sinclairs squabbled over the inheritance. George Sinclair of Keiss claimed that the castle should have been passed to him. He led a party of loyal followers to Girnigoe and removed all the furniture, flooring, doors, and even the roofs.

This conflict over the rights to the Earldom and the castle culminated in the last clan battle, fought at Altimarlach, west of Wick, where the Campbells emerged triumphant.

The story did not end there, however, for in 1681 the Sinclairs regained the Earldom and ownership of Girnigoe. After this, the castle seems to have been allowed to fall into decay, and it became a picturesque ruin.

High winds and coastal erosion took their toll, and parts of the castle fell into the sea before a Sinclair family charity took control and began the long process of restoring the site, a process that is still going on.

One castle or two?

The name tells its own tale. Some sources suggest there were 2 castles here; the first, named Castle Sinclair, of which little now remains, and a second, named Castle Girnigoe, whose dramatic ruins account for most of the structure we see today. The first written records come from 1700 when the castle was already a ruin, so decoding the puzzle of its history is a real challenge. 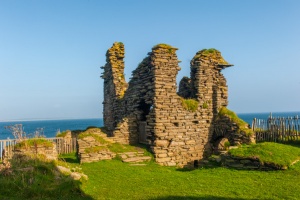 The north range of the outer ward

Recent archaeology has solved the puzzle, however; there was only ever one castle atop the cliffs. It was originally known as Castle Girnigoe, and it was only in 1606 that Sinclair was added to the name after George Sinclair, 4th Earl of Caithness, successfully had a law passed by Parliament to rename Girnigoe as Sinclair. So, technically, it should be known as Castle Sinclair, but the traditional name of Girnigoe has stuck in the public imagination, so it is usually referred to by its double-barrelled name.

The castle is owned, and in the process of being restored by, the Clan Sinclair Trust, a registered charity. Sinclair Girnigoe is the only Scottish castle to be listed by the World Monument Fund, as one of the 100 most endangered sites in the world.

To reach the castle you have to take the road north of Wick that leads to Noss Head. Immediately before Noss Head lighthouse is a large parking area, and a signposted path leading towards the shore. There are several extremely good information panels along the path, telling not only the story of the castle but looking at the natural geography, geology, and animal life in the area.

It is only a few hundred yards to the castle, which rises dramatically above a steep cliff. You have to pass the castle headland to reach the site of the west barbican, and a modern wooden bridge which replaces the original medieval drawbridge and crosses over a ditch cut through the rocky headland, to a gatehouse. Go through the gatehouse to the outer ward, with more information panels explaining how the various buildings in this area were used.

As of this writing, there is no access to the south barbican, hall, and chapel range in the inner ward, where the bulk of the castle stands, due to dangerous masonry. This area is in the process of being restored, so hopefully future visitors will be able to reach the inner bailey.

If you look further north and west along the shore you can see the castellated outline of Ackergill Tower, another Sinclair fortress, several miles away. Castle Sinclair Girnigoe is incredibly dramatic, a ruin, certainly, but a beautiful ruin, and well worth visiting. The location is superb, and the ruins are as picturesque as any other castle in Scotland. 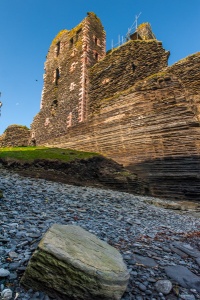 The tower house from below 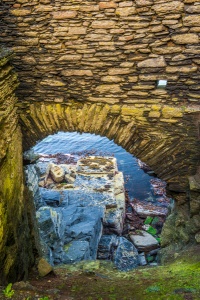 Rock cut ditch between the
inner and outer wards

Nearby accommodation is calculated 'as the crow flies' from Castle Sinclair Girnigoe. 'Nearest' may involve a long drive up and down glens or, if you are near the coast, may include a ferry ride! Please check the property map to make sure the location is right for you.