HERITAGE HIGHLIGHTS:   One of the best preserved brochs in Caithness 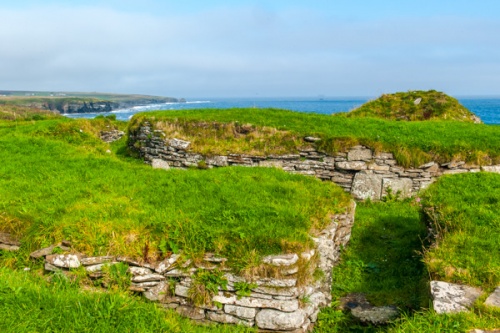 The Caithness Archaeological Trust calls Nybster Broch one of the most spectacular Iron Age settlements in the north of Scotland. I'd say they are understating the case.

Nybster is easily one of the most accessible brochs in Caithness, which has more of the rounded Iron age communities than anywhere in Scotland. And make no mistake, Nybster is a settlement, not an isolated fort. 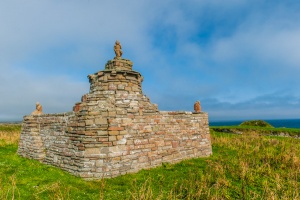 The broch occupies a well-defended position on a promontory, with steep cliffs on the seaward side. It was occupied throughout the late Iron Age and well into the historical period. Throughout this long period of use it evolved into a complex of interlinked stone buildings, connected by passages.

It is difficult to interpret the complex of structures surrounding the central broch. Some of the buildings on the seaward side may be Pictish, or at least reused in Pictish ties, and a block-house to the west of the broch may actually predate it, perhaps being as old as 700 BC to 500 BC. Some of the outbuildings associated with the broch have been lost to coastal erosion.

The broch itself has an internal diameter of 23 feet, with a wall thickness of roughly 14 feet. Only five feet or so of the walls still stand, but that is enough to give a very clear outline of the broch construction and layout.

Nybster was first excavated by Sir Francis Tress Barry in the late 19th century. Apart from the exhaustive excavations of the site, Tress Barry's major contribution was a rather odd tower built to commemorate his nephew.

This memorial, known as Mervyn's Tower, seems to have been built with stones removed from the excavated broch, and is decorated with rather bizarre carvings of gargoyles, and set with plaques commemorating the archaeological work of Tress Barry.

Though the juxtaposition of the 19th-century tower and the Iron Age broch is a strange one, it does have one great positive result; you can climb Mervyn's Tower to get a wonderful overview of the excavated broch. It is the closest thing you can get to a birds-eye view without hiring an aeroplane!

Finds from the broch excavations include stone tools, pottery, metal objects, and pottery. Many of these finds can be viewed at the nearby Broch Centre, housed in Nybster's old schoolhouse on the main road. 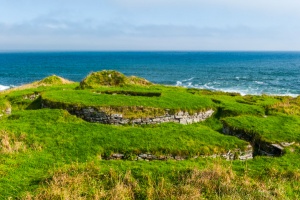 The broch from atop Mervyn's Tower 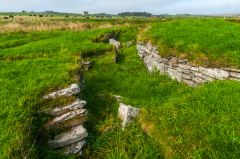 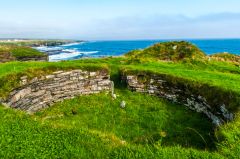 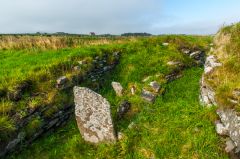 Nearby accommodation is calculated 'as the crow flies' from Nybster Broch. 'Nearest' may involve a long drive up and down glens or, if you are near the coast, may include a ferry ride! Please check the property map to make sure the location is right for you.

More self catering near Nybster Broch