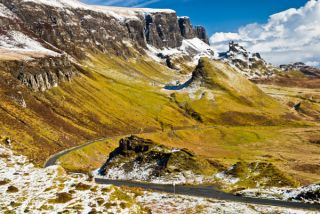 A twenty mile (32km) coastal drive skirts the dramatic upland of the Trotternish Peninsula. The scenery is breathtaking, with unusual rock formations like the Old Man of Storr and The Quiraing jutting from the hard basalt of the Trotternish Ridge.
Portree
The capital of the Isle of Skye, Portree stands at the south eastern edge of the Trotternish. The old harbour is lined with colourfully painted houses.

Old Man of Storr
From Portree, the A855 leads north along the eastern coastline of the Trotternish, past Loch Fada and Loch Leathan to The Storr. A parking area is set in a wooded copse, and from there a trail leads uphill to emerge beneath the striking rock needle known as the Old Man of Storr. The needle is a popular target for rock-climbers, and you can often watch climbers laden with ropes and safety gear helping each other up the almost vertical rock face. 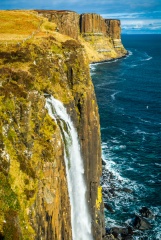 Kilt Rock
Kilt Rock
Almost opposite the Storr parking area a road leads to the cliffs overlooking Bearreraig Bay, where a viewpoint looks across a peculiar rock formation known as Kilt Rock. The name comes from the fact that the folds in the rock resemble a traditional Scottish kilt.

The Quiraing
At Staffin a minor road ascends to the top of the Trotternish Ridge. From a parking area on the ridge top, a trail leads below the steep cliffs of the ridge to an astonishing area of strange rock formations known as The Quiraing. Among the rock shapes is one known as The Prison because it looks like a medieval castle - if you view it from the right angle.

A scramble up the loose scree brings you to a rock needle, simply called The Needle, and beyond the Needle is a small plateau called The Table. When clan warfare threatened, local people would bring their cattle up to The Table for safety. Considering how hard it is for humans, I don't know how the cattle managed it! The scenery from the Quiraing is simply breathtaking, and the strange rock formations seem almost other-worldly.

Duntulm Castle
Returning to Staffin, the A855 hugs the coast past the Flodigarry Country House Hotel, and around the northern tip of the peninsula at Kilmaluig. As the western side of the Trotternish comes into view, so does the ruined clifftop castle at Duntulm. Home of first the MacLeods, then the MacDonalds of Sleat, Duntulm has a couple of resident ghosts. One is said to be Hugh MacDonald, imprisoned in the dungeon in 1601 with nothing but a plate of salted beef and an empty water jug. Not surprisingly, Macdonald was driven mad with thirst.

Flora Macdonald's Grave
Just south of Duntulm is Kilmuir, site of the Skye Museum of Island Life, based around a set of traditional thatched croft houses. Just above the museum is Kilmuir cemetery, where you will find the grave of Jacobite heroine Flora MacDonald, marked by a Victorian cross. Visitors still leave flowers on the grave of MacDonald, who famously helped Bonnie Prince Charlie escape from his English pursuers after the Battle of Culloden in 1745.

Not far south of Kilmuir is Kilvaxter, where you can visit a prehistoric souterrain, or underground passage, located directly beside the road. The road then descends steeply into Uig, where ferries leave for the Western Isles. On the southern hills above Uig harbour stands Captain Fraser's Folly, erected by one of the most notorious landlords on Skye during the Highland Clearances.

The Fairy Glen
Almost opposite the folly, a road leads to the Fairy Glen, an astonishing area of strange rock formations. One of the most striking is Castle Ewen, so named because it resembles a medieval castle tower.

Kensaleyre Standing Stones
If you follow the A87 south from Uig, along the eastern coast of the Trotternish, you come to Kensaleyre, where a trio of standing stones are easily seen by the shore. Just south of Kensaleyre is Tote, where another standing stone can be found beside a farm track.

Those are just some of the highlights of the Trotternish. Though there is plenty to see, the real attraction is the amazing landscape. The Trotternish has some of the most memorable and striking geography of any place in Britain. The Quiraing, in particular, appears regularly in calendars and tourist brochures, and its no wonder. Come and see for yourself why this is one of my favourite areas in Britain. 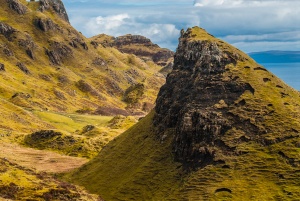 The Prison, in the Quiraing 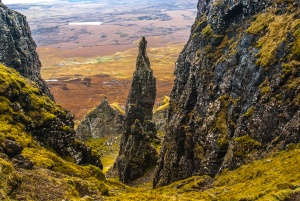 The Needle from above 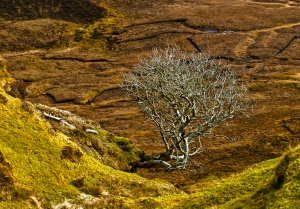 A leafless tree beside the Quiraing trail 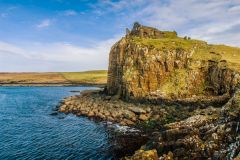 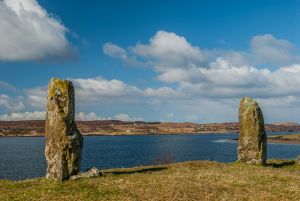 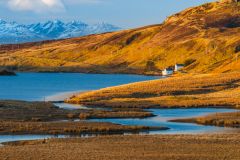 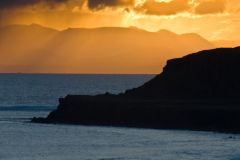 Nearby accommodation is calculated 'as the crow flies' from Trotternish Peninsula. 'Nearest' may involve a long drive up and down glens or, if you are near the coast, may include a ferry ride! Please check the property map to make sure the location is right for you.

More self catering near Trotternish Peninsula >>