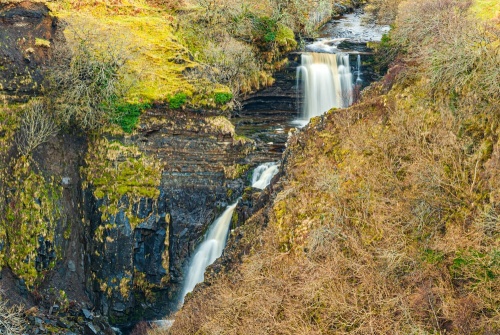 Lealt Waterfall is a dramatic waterfall on the River Lealt, 13 miles (21km) north of Portree and 4.3 miles (7km) south of Staffin on the A855 coastal road.

The River Lealt (Abhainn an Lethuillt in Gaelic) runs down from the heights of the Trotternish Ridge and descends a deep, narrow gorge immediately east of the roadway, dropping some 90m in two stages to the valley floor before emptying into the Sound of Raasay at Invertote.

There is a car park on the east side of the A855 (southbound side), but you can easily access it from both southbound and northbound lanes. The car park has room for about 20 vehicles. The parking area was installed and is maintained by a local group. There is no charge, but you are kindly requested to make a donation. 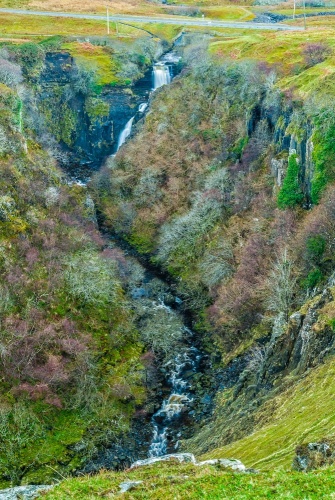 Lealt Falls and Gorge from the viewing area

At the northern edge of the parking area a signed trail leads through a wooden gate. The trail follows the northern edge of Lealt Gorge to a viewing platform extending out over the gorge that looks back west for views of the upper waterfall. This first viewing area has relatively flat access and is only a few minutes easy walk from the car park.

Please be careful if you visit with children; there are no fences along the edge of the gorge, and it is a steep fall if your little one wanders too near the edge. 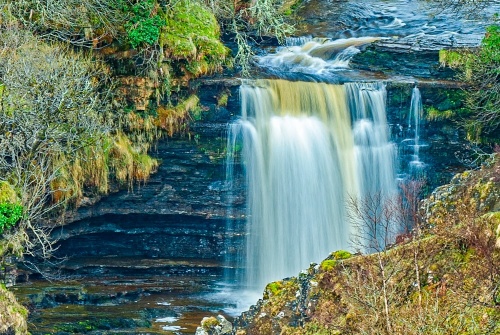 Don't stop after seeing the waterfall from the viewing platform; take the time to continue east along the trail to a second platform overlooking the sea. This viewing area gives wonderful coastal views and also lets you look down on old bothies used by salmon fishermen, and the remains of a factory set up to process diatomite.

The factory was the eastern terminus of the Lealt Valley Diatomite Railway, set up in 1889. This narrow-gauge tramway followed the course of the River Lealt to Loch Cuithir, where diatomite was quarried. The tramway originally worked by gravity, but a steam locomotive was later added.

The eastern end of the line terminated at Invertote, where there were warehouses on the clifftops. The ruined building we can see today at the base of the cliffs was where the diatomite was dried, ground to a powder, and calcined (heated at high temperature to remove impurities). 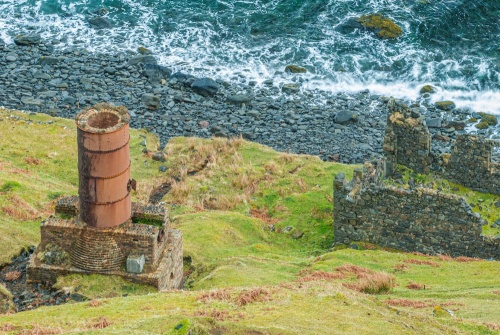 Ruins of the old diatomite factory at Invertote

If you fancy some exercise, there is a steep trail leading down the side of Lealt Gorge to the river. from there, you can make your way back up the gorge to the base of the falls. Please do not try this after heavy rains, when the trail is slippery, and the height of the river makes the trek up the gorge dangerous -- or, at least, extremely wet.

Lealt Waterfall is extremely easy to get to, and is worth a brief stop, even if you don't go all the way to the second viewpoint. 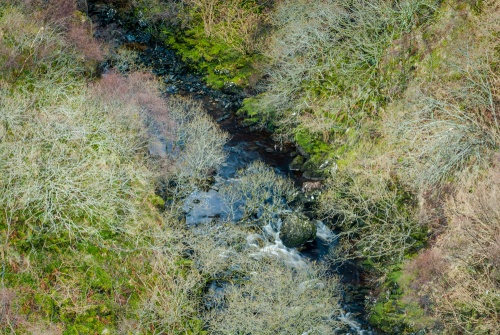 The River Lealt from the lip of the gorge

There is a well-marked parking area on the eastern (southbound) side A855 1km south of Culnacnoc at NG514607. From the parking area, simply follow the obvious trail along the side of Lealt Gorge to the viewing platform. The route is mostly level and should take no more than a few minutes. We recommend that you carry on for another 250m to the second viewing area, overlooking the coast.

For those with an interest in place names, the name 'Lealt' means 'a stream with one high bank.'

Do take the time to visit dramatic Mealt Falls and Kilt Rock, a few miles to the north of Lealt.

About Lealt Waterfall, Skye
Address: A855, Staffin, Isle of Skye, Highlands and Islands, Scotland
Attraction Type: Countryside - Waterfall
Location: There is a parking area on the A855 1km south of Culnacnoc. From the car park, a level trail leads to a viewing platform jutting over the gorge.
Location map
OS: NG516603
Photo Credit: David Ross and Britain Express

Nearby accommodation is calculated 'as the crow flies' from Lealt Waterfall. 'Nearest' may involve a long drive up and down glens or, if you are near the coast, may include a ferry ride! Please check the property map to make sure the location is right for you.