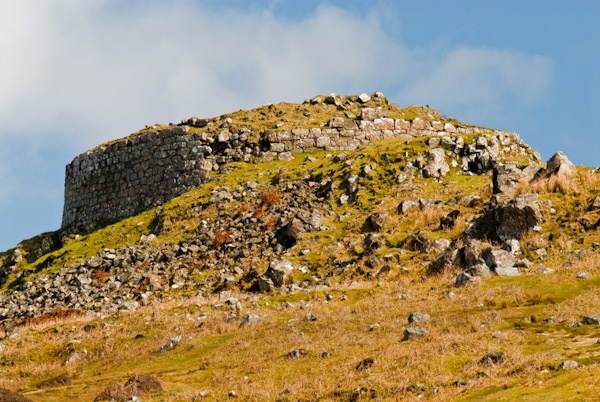 Dun Beag is a wonderfully preserved Iron Age broch standing on a hillside with wonderful views out over Loch Harport and Loch Braccadale. The broch was apparently in use for occupation as late as the 18th century.

The circular broch is almost majestic when seen from below, from the parking area on the far side of the A863. A path leads up a bracken-covered hillside to the broch. There are chambers cut into the thickness of the walls, which still stand to a considerable height in several places.

You can easily see why Historic Scotland describes Dun Beag as 'a fine example of a Hebridean broch'. It is certainly the easiest broch to access on Skye. The name translates as 'small fort', to distinguish it from Dun Mor ('big fort'), less than half a mile further inland.

The entrance is a narrow passage in the outer wall, and you can see stone door-checks, showing that it was defended by a timber door. Though it could be defended, it seems most likely that the broch was primarily a status symbol, an indication of wealth.

We don't know for certain, but this style of broch became common from around 500 BC. It was occupied - though not continuously - into the medieval period. Coins from the medieval period and as late as the 19th century have been found on the site. The earliest coins come from the reign of Henry II of England (1154-1189). Outside the broch walls are heaps of stones showing where later buildings were erected.

The broch probably stood around 10m high (roughly 33 feet). The double walls are roughly 3.5m (12 feet) thick, with a stair passage built into the thickness of the walls. The walls now stand to less than 2m and you can walk along the top. The broch would have had a central fire, with smoke escaping through gaps in a roof covering of turf or timber. There would have been no windows in the walls.

The interior is a circle, about 36 feet across. It probably had several floors, though there is no evidence of floors remaining.

In case you worry about dragging your family to another historic site, let me tell you that our young daughter was so enamoured of the small chambers set into the broch walls that she immediately embarked on a fantasy game where the broch became her princess palace and the chambers became her royal quarters. We couldn't get her to leave! 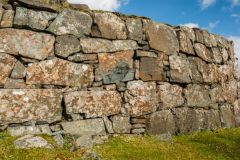 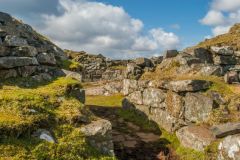 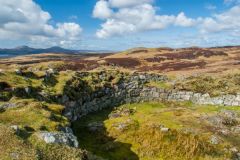 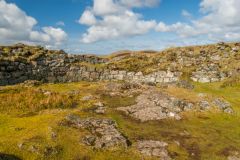 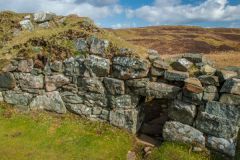 Nearby accommodation is calculated 'as the crow flies' from Dun Beag Broch. 'Nearest' may involve a long drive up and down glens or, if you are near the coast, may include a ferry ride! Please check the property map to make sure the location is right for you.