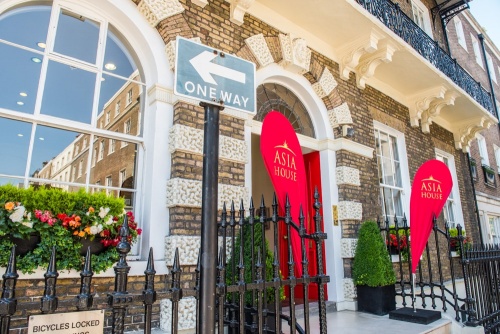 The Grade II listed building that acts as the London headquarters for Asia House was begun by the Scottish brothers James and Robert Adam, in their typically elegant neo-classical style. The land on New Cavendish Street was then part of the Duke of Portland's Marylebone estate.

However, the building work progressed slowly, and by 1775 Robert Adam had turned his attention to Portland Place, so the completion of the project was handed over to John Johnson. Johnson designed a large, elegant townhouse, while the interiors included bookcases designed by Sir John Soane. The rooms retain many of their original period details, including plasterwork cornices.

What is immediately striking about Asia House is that the exterior is so understated, giving no hint of the richly decorated interiors.

Due to the busy programme of events sponsored by Asia House perhaps the best time to explore the building's architectural heritage is during the annual Open Days heritage event.

Asia House is easy to find; it stands on the north side of New Cavendish Street one block west of Portland Place. The closest tube station is Regents Park, about 10 minutes walk to the north.

More self catering near Asia House >>