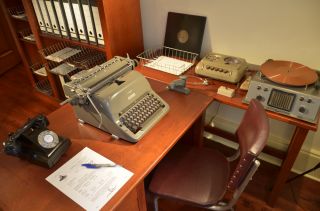 Fitzroy House was built in 1791, with elegant interiors inspired by Robert Adam, who developed nearby Fitzroy Square. The house was the home of playwright George Bernard Shaw, and in the 1950s became the residence of writer and philosopher L. Ron Hubbard, founder of Dianetics and Scientology.

Hubbard was named the world's “Most Published Author” by the Guinness Book of World Records, and the library illustrates why, with hundreds of his books on display - out a grand total of 1,084 publications over the course of his life. The offices are like a 1950s time capsule, complete with a Western Union telefax, manual typewriters, and Grundig tape recorders.

There are 4 floors open to visitors, covering the life and career of L Ron Hubbard. One entire floor is dedicated to the author's early life, to his emergence as a writer of fiction in the 1930s and his later humanitarian ventures. The entire second floor is dedicated to Hubbard's literary works, while the first-floor lounge features photographs of London and Sussex taken by Hubbard, who was an avid photographer.

The house is set in Fitzrovia, an area renown for its literary associations. Among the many famous authors and artists who lived within a stone's throw of Fitzroy House are George Orwell, Charles Dickens, HG Wells, James Whistler, and Virginia Wolf, to name just a few. Unlike its neighbours, Fitzroy House retains its original Georgian exterior.

The house is open for free group and individual tours by appointment, and special educational and religious tours can be arranged.

More self catering near Fitzroy House >>