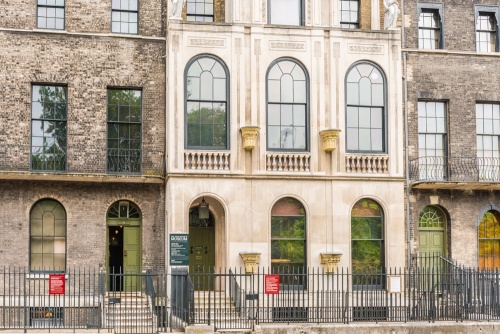 Sir John Soanes Museum
In the elegant surroundings of Lincoln's Inn Fields stands the private home of the distinguished architect, Sir John Soane, who left his astonishing art and antiquities collection to the nation in 1837. The museum boasts an Architectural Drawings Gallery, changing exhibits, and paintings by Hogarth, Turner, and Watteau among others. 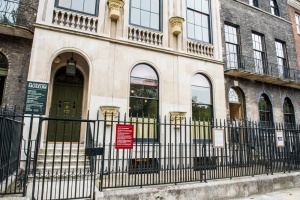 No 13, the centre of the
museum's three houses

Sir John Soane came from a humble background. He was born in 1753, the son of a bricklayer, but went on to carve out a highly successful career as an architect. He designed his own London house at 13 Lincolns Inn Fields.

Among the buildings designed by Soane during his long and successful career are Pitzhanger Manor in Ealing (later the public library), Moggerhanger House in Bedfordshire, and the Dulwich Picture Gallery.

When Soane was named a Professor of Architecture at the Royal Academy in 1806 he decided to make his private collection of books and architectural models available to students as a learning resource.

He carefully organized his collections and opened them to his students on the before and the day after each of his lectures. By 1827 Soane's private collection was being called to as an 'Academy of Architecture'.

Soane was able to use his influence with wealthy patrons to get an Act of Parliament passed to preserve his house and collection for use by students - both 'official' and amateur enthusiasts - of architecture, painting, and sculpture.

When Soane died in 1837 the Act came into effect, and the museum was formed, under a Board of Trustees. One of the major jobs the Trustees were entrusted with was keeping the Museum as Soane had left it, and allowing public access to the collections. 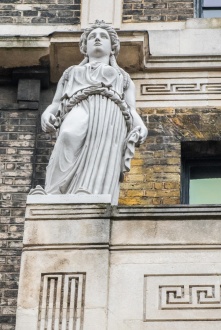 Statue on the facade
of No. 13

In 1792 Soane bought No. 12 Lincolns Inn Fields as a family home for himself and his wife Eliza. The site was conveniently located close to major coaching stops on High Holborn, which enabled Soane to travel to meet with clients. Soane tore down the house and rebuilt it with a two-storey office block at the back.

In 1807 he purchased the neighbouring house, No. 13. He didn't need the whole house; he really only wanted the stable block at the back, but he was willing to buy the entire property to get it.

He tore down the existing stables and built a museum area to house his collections and create space for a new architectural office. However, Soane was such an avid collector of plaster casts and architectural models that the stable block at No. 13 soon filled up.

Soane offered the tenant of No. 13 the opportunity to move into No. 12 next door, and in 1812 he began work on No. 13. He demolished the existing building and created a striking 3-storey brick house with a verandah to the front. The Soane family moved in in the autumn of 1813, and Sir John lived here until his death in 1837.

In the meantime, the collection continued to expand, so Soanes bought No. 14 as well. Again, he only wanted the stables to house his collections, so he rebuilt the front part of the house to mirror No. 12 and rented it out.

Soanes wanted No. 14 to be a family home, but the renters turned out to be a law firm who used it as their offices, which led to a lengthy court case. No. 14 never was used as the family home that Soanes envisaged, and remained an office until it was purchased by the Soanes museum trust, who now use the former law offices as their own headquarters.

Among the many, many highlights is a collection of William Hogarth's series of etchings, A Rake's Progress. There are some 30,000 architectural drawings, over 6,000 books, and 252 architectural models. Soane's personal sketchbooks can be consulted, and his collection of over 700 pieces of Greek and Roman antiquities.

Among the drawings are sketches by Soane, Palladian master architect Robert Adam, and his brother James. Sketchbooks used by Soane on his great tour of 1778-1780 are on display. It is a remarkable collection by a remarkable man. 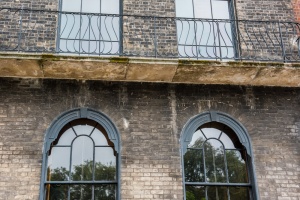 The subdued facade
of No. 14

The museum is easy to reach from Holborn tube station, about a 10-minute stroll away. We visited during London Open House Days, the annual heritage event that gives behind-the-scenes access to so many of London's historic locations. We found space on a tour of the parts of the museum not normally open to the public, including the former law offices in No. 14.

One of the rooms has been adapted to house architectural drawings by the Adam brothers, Robert and John, two of the most prolific and influential country house architects of the 18th century.

It is a shame that we were not allowed to take photos of the museum collections. Walking into the museum area is a jaw-dropping experience. The sheer magnitude of the collection is staggering. Classical Greek statues jostle for space with Egyptian columns and decorative stonework. At the centre of the three houses is a light-filled atrium that Soanes called The Monk's Yard, filled with a remarkable collection of antiquities.

The highlight of the collection is the magnificently carved alabaster sarcophagus of the Egyptian pharaoh Seti I, but to single out one piece misses the real charm of the museum; the sheer scale of the collection of architectural ephemera is astonishing.