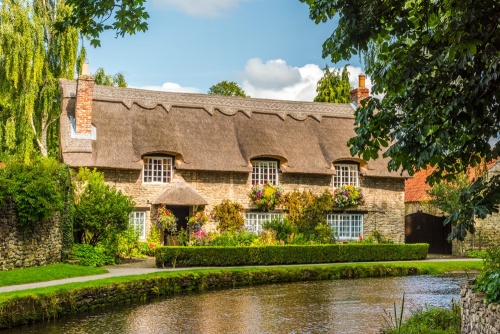 Thornton-le-Dale is a picturesque village on the southern fringe of the North York Moors National Park, about two miles east of Pickering. The village goes back to at least the 11th century when it was known simply as 'Torentune'.

North of the village the ground rises to meet the moors, while to the south it falls away to eventually meet the River Derwent.

The village grew up at the junction of roads linking Malton with Whitby (the north/south road) and Scarborough with Pickering (the east/west road, now the A170). Thornton Beck rises on the moors to the north and runs through the centre of the village on its way south to join the River Derwent. 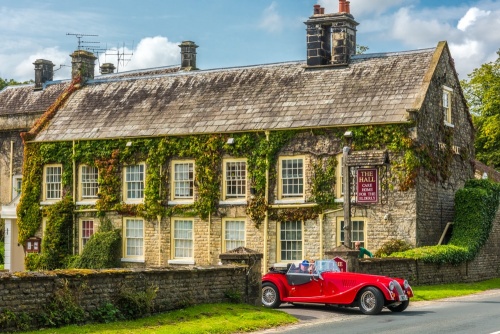 Thornton-le-Dale regularly tops lists of Britain's Prettiest Villages, and village views have graced countless calendars and chocolate boxes over the years. Speaking of chocolate, stop in at the Chocolate Factory on the village square, for a taste of handmade local treats.

The village name is thought to mean a place surrounded by thorn bushes. The manor was seized by the Crown after the Norman Conquest of 1066, but William the Conqueror later gave it to his sister Adelaide. In 1281 Edward I granted the lord of the manor John de Easton the right to hold a weekly market on the village green. 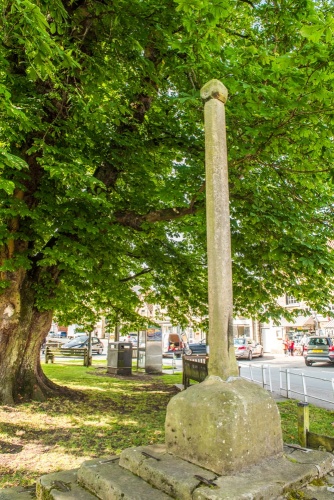 Near the road junction in the centre of the village is a small village green. On the green is a 13th-century market cross - a slender octagonal shaft set on a base of six stone steps. At the base of the cross is a replica of the old village stocks. The stocks were last used to punish wrongdoers in 1874.

On the north side of Main Street (the A170) are Lady Lumley's Almshouses, a terrace of twelve houses built in 1670. Lady Elizabeth Lumley, Viscountess Lumley, established a Deed of Trust in 1657, laying out the terms for building the almshouses. The almshouses were built to provide accommodation for 12 poor people, four from Thornton, one from Farmanby or Ellerburn, six from Sinnington, and one from Little Easton and Marton alternately. In the centre of the terrace is a 19th-century plaque commemorating the founding. 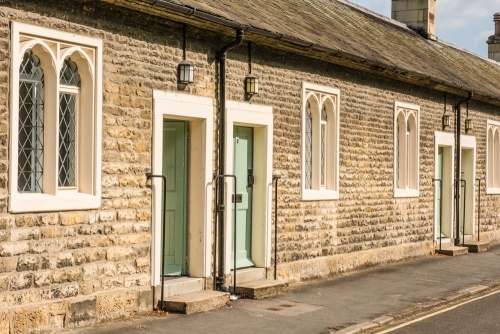 At the eastern end, detached from the terrace, is a schoolhouse built at the same time, with funds given by Lady Lumley. Lady Lumley was born Elizabeth Sandys, and married Richard, 1st Viscount Lumley. The couple had no children, so in 1657 she gave money to erect a school to help poor local parents educate their children.

The school was to be a place of schooling and prayer reading for children of Thornton-le-Dale and Sinnington parishes. Lady Lumley also left 10 pounds per year to support five students at Oxford University and another five at Cambridge. The school fell out of use in the early 20th century and the schoolhouse was later used as a village hall. 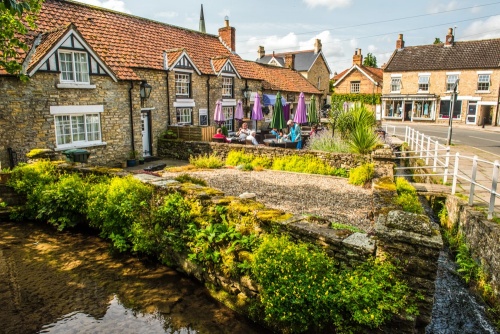 Thornton Beck runs through the village

At the eastern edge of the village stands the 14th-century church of All Saints. There has probably been a church here since the 7th century, and before that the site seems to have been used for pagan worship. Inside the church is a 14th-century effigy of a woman, thought to be Lady Beatrice Hastings.

All Saints Church was the scene of historical drama during the Civil War when a group of Parliamentary soldiers under Sir Hugh Chomley sought refuge from their Royalist pursuers. You can still see marks made by Civil War musket balls on the nave pillars.

Almost opposite the church is Thornton Hall, a late-Elizabethan H-shaped house rebuilt in the 18th century. 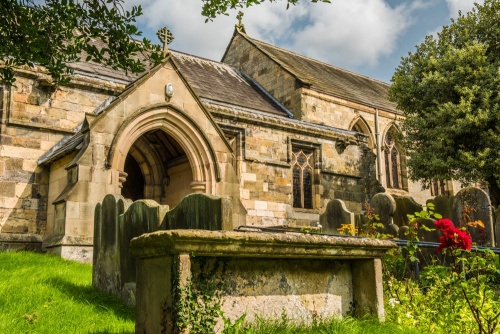 Thornton-le-Dale boasts a large number of very attractive historic buildings, but one rises above the rest. Set back from the Main Street beside Thornton Beck is Beck Isle Cottage (also known simply as The Thatched Cottage), a thatched house built in the 17th century. 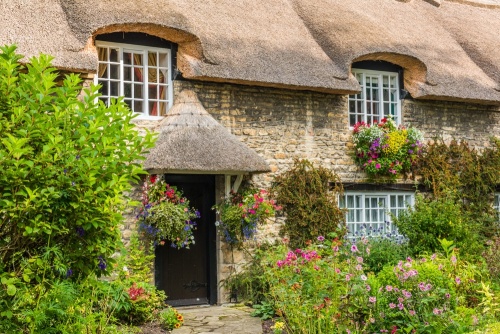 Another view of Beck Isle Cottage

Just north of Thornton-le-Dale is the hamlet of Ellerburn, where you will find St Hilda's Church, once the mother church for the region. The building we see today dates to around 1050 but it incorporates carved stone fragments from as early as the 7th century, including a very well-preserved Scandinavian cross head and parts of two Viking hogback gravestones.

There are 77 listed buildings in Thornton-le-Dale. The two highest-rated buildings at Grade II* are the medieval church of All Saints and The Hall, on High Street. The Hall (also known as Thornton Hall) dates to the 17th century and incorporates parts of much older buildings. The 17th-century front facade is hidden behind a later Georgian frontage.

Just outside the village is the site of Roxby Castle, a medieval fortress that was the home of the Cholmeley (sometimes spelled Chomley) family. Perhaps the most famous member of the family was Sir Richard Chomley, known as the Black Knight of the North. Sir Richard died in 1583 and is buried under the chancel of All Saints Church. 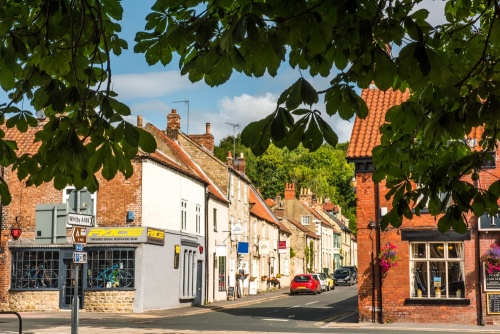 The village crossroads and the road to Whitby

Thornton-le-Dale is on the A170 two miles east of Pickering, on the main route to Scarborough. There is a large car park in the village centre off Maltongate. Use the postcode YO18 7SD for satnavs. 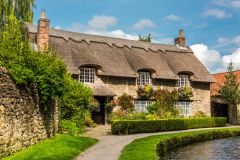 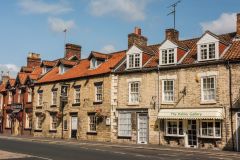 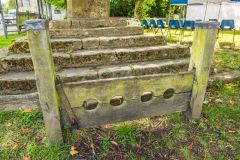 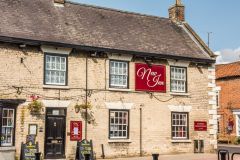 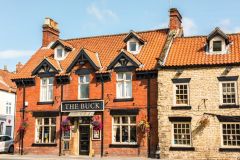 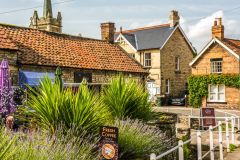 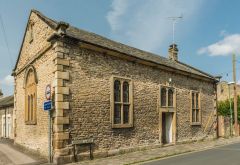 More self catering near Thornton-le-Dale

More bed and breakfasts near Thornton-le-Dale

Self Catering near Thornton-le-Dale