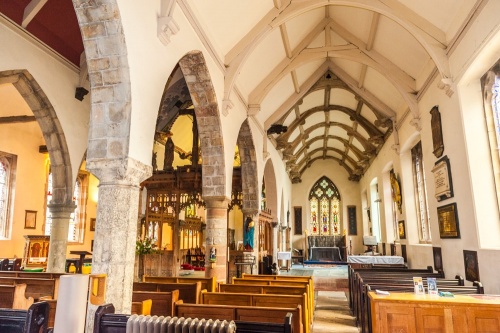 All Saints possesses a fine collection of original 14th-century stained glass. Two windows of note depict the "Corporal Acts of Mercy", and the "Pricke of Conscience". Look for the stained glass figure depicted wearing eyeglasses, the earliest depiction of spectacles in Britain!

The first record of All Saints church comes from 1089 when the patronage of the rectory was given to the nearby priory of Holy Trinity at Micklegate by one Ralph Paganell, a layman who had founded Holy Trinity. The first church of All Saints occupied the space between the current chancel and the west aisle of the nave.

That early building was expanded in the late 12th century to keep up with the expanding population on the south bank of the River Ouse. The extension incorporates pieces of Roman columns found on the site. Much of what we see today is the result of rebuilding in the late 14th century when the west tower and its striking spire was built. The spire stretches upwards to 120 feet, creating a distinctive landmark for ships passing along the River Ouse.

From 1467 a superb ceiling was added in the chancel and chancel aisles, with painted and gilded figures of angels. Some of the angels hold musical instruments. The gilded pulpit dates to 1675, and there are several medieval grave markers embedded in the floor of the nave and aisles.

The main reason to visit All Saints is to enjoy the wonderful array of medieval stained glass. There are 11 windows with medieval glass, much of it complete and in its original state. Among the many highlights are:

The Corporal Acts of Mercy Window

Possibly the gift of Nicholas Blackburn, Lord Mayor of York, this window depicts 6 of the 7 Corporal acts of mercy, including clothing the naked, giving hospitality to strangers, caring for prisoners, feeding the hungry, giving drink to the thirsty, and visiting the sick. Curiously, the act that is not represented is burying the dead. One bearded man is depicted performing the acts of mercy; presumably, this is meant to represent the donor, Nicholas Blackburn. 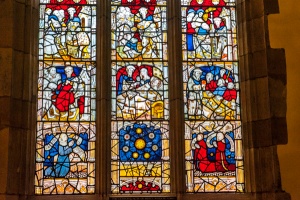 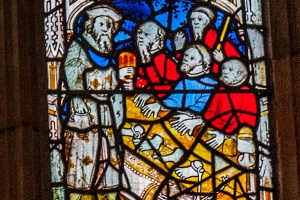 This unique window takes its theme from a popular Middle English poem by an unknown author, called Pricke of Conscience. The poem covers the last 15 days of the world, each day with its own panel and lines of Middle English text. The first 9 panels depict the destruction of the earth, with floods and earthquakes. Look for the spire of All Saints toppling to the ground. The final panels depict the end of all things, with the earth consumed by flames, dead rising, and stars falling from the sky. The vivid scenes must have exerted a powerful call for repentance on the worshippers! 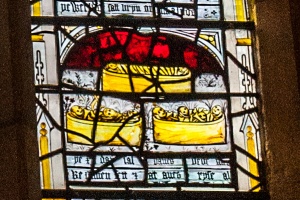 The dead rising from their graves panel 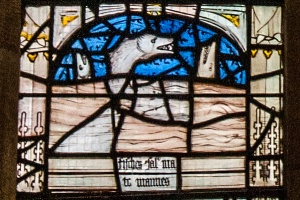 A medieval puzzle reassembled from fragments according to a 17th-century drawing. The glass panels depict Nine Orders of Angels, each order leading a group from a different social class of medieval society. For example, a Seraphim leads a group of clerics, while a Cherubim leads a group of clerics. The most intriguing groups are the lower levels of society in medieval York; there are labourers, a tanner, working men and women, burgesses and their wives, and a wonderful image of a man holding a pair of spectacles. This is thought to be the earliest representation of eyeglasses in British art. 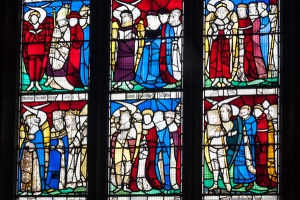 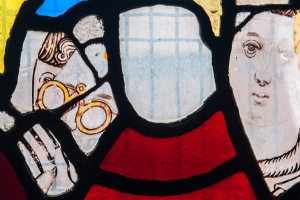 A further collection of 15th-century glass is in the sanctuary and depicts St Anne teaching a youthful Mary to read. There is also a late 15th-century wooden sedilia bearing the arms of rector John Gilyot and a carving of a pelican, the symbol of the Guild of Corpus Christi, to which Gilyot belonged.

There are two All Saints in York, so they are usually given rather long-winded names to distinguish them. All Saints Pavement is located in the city centre near Jorvik Viking Centre, while All Saints North Street is south of the River Ouse.

It's a funny church to visit; it is half-hidden by encroaching buildings, jammed into a small churchyard like so many city churches. You keep catching glimpses of the spire peering out from behind surrounding buildings, then you lose sight of it and wonder if you'll ever find the church itself. Persevere, and you will be rewarded with an absolutely stunning medieval interior and a series of medieval stained glass windows that are arguably the best in England. 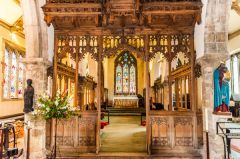 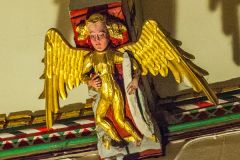 More self catering near York, All Saints North Street Church >>