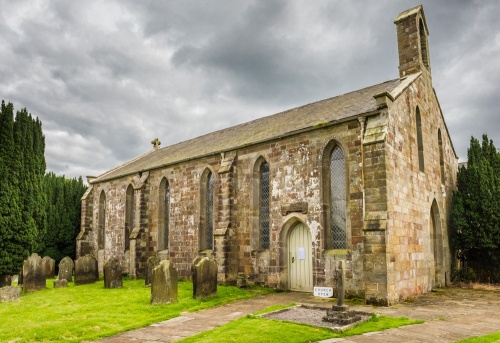 Where is the abbey?

That's the most common question asked by visitors to the North York Moors village of Rosedale Abbey. Despite the name, there has never been an abbey in Rosedale - though there was a medieval priory for nuns (the village also has nothing to do with roses, but that's another story). Parts of the medieval priory ruins are incorporated into the 19th-century parish church of St Mary and St Laurence.

In 1154 a landowner named William de Rosedale founded a priory for nuns in Rosedale. The nuns initially came from the Benedictine order but the priory later became a Cistercian house. The name 'Rosedale Abbey' was never used and does not appear in any historical record.

William de Rosedale held the estates here on behalf of the powerful De Stuteville family, who had large estates in the north of England. The Priory was given large estates covering almost all of the Rosedale valley and built a sizeable community, with a chapel, dormitories, and several outlying farms. 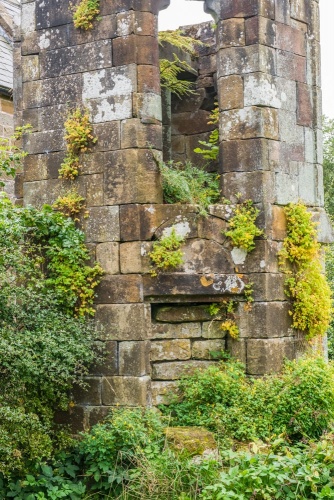 The nuns of Rosedale were probably the first to practice large-scale sheep farming on the North York Moors. The Priory never grew terribly large and averaged between nine and twelve nuns under a prioress. At the time it was suppressed during Henry VIII's Dissolution of the Monasteries only eight nuns were living here under a prioress.

The nuns were supported by lay brothers and sisters who did the practical work of running the farms and maintaining the priory. The nuns operated a guest house, welcoming travellers and offering medical care to those in need.

The priory was frequently visited by officials of the Archbishop of York, whose job it was to make sure the nuns were maintaining a proper spiritual discipline and not becoming too worldly. The reports make fascinating reading, for they tell of the nuns letting dogs into the church and wearing colourful costumes, as well as other minor transgressions. The Archbishop kept a close eye on the nuns of Rosedale, particularly in the late medieval period. 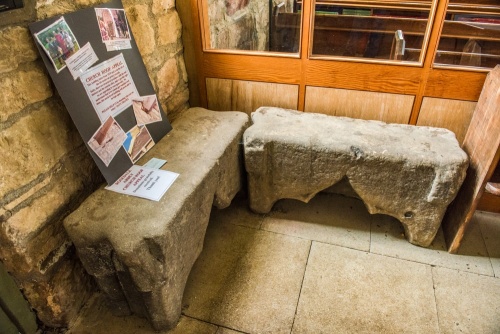 The priory was suppressed on 17 August 1536. Unlike many medieval monasteries, the priory remained in relatively good repair for several centuries and the priory chapel was used by the local population as a place of worship. It was not until the Rosedale area became a centre for iron mining and smelting in the 19th century that the monastic buildings were destroyed and the stones taken for building projects.

The farm buildings were torn down to make way for the Lecture Hall in 1873. They are now part of Rosedale School. You can see medieval pieces of carved stone incorporated into many buildings throughout the village. 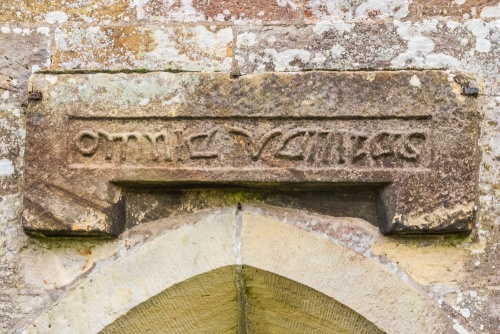 The burgeoning ironstone industry led to a population explosion in Rosedale. With the expanding population came the need for a new church. In 1839 the medieval monastic chapel was torn down and a new church built, with the cost of £665 born entirely by public subscription. The architect was Lewis Vulliamy (1791-1871).

A painted panel inside the church records every single donation, 'down to the last widow's mite' as the church guide puts it (a widow's mite is a small donation that is all a poor person can afford to give).

Even though the church was built in 1839 there was no parish of Rosedale until 1879. Until that time the east side of Rosedale was part of Middleton parish and the west side was part of Lastingham parish.

The pews in the nave are the work of Robert 'Mouseman' Thompson of Kilburn. Don't spend time looking for Thompson's iconic mouse carvings on the pews, however. They were crafted at the beginning of his career before he became famous for adding the figure of a mouse to all his work.

At the west end of the church, near the entrance, is an exhibition on the history of Rosedale and the iron mining industry. 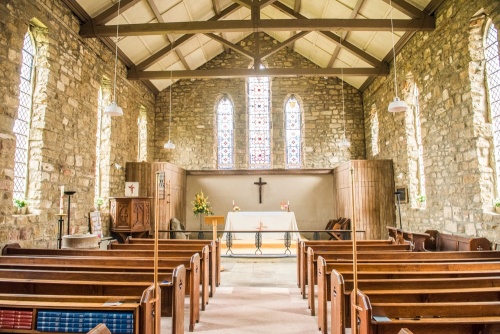 There are only a few fragments of the medieval priory remaining. A two-light window facing the school playground survives from the medieval chapel. Over the church door is a late-medieval carved stone with a Latin inscription reading 'Omnia Vanitas' (All is Vanity). By tradition, this inscription is said to have been carved by one of the nuns.

Outside the west end of the church is a pier from the priory chapel, standing some 4m high. You can see part of a recessed doorway arch set into the pier. This may have formed part of a turret stair leading from the chapel to the nuns' dormitory. The neighbouring school and playground stand on the site of the priory cloisters.

The only other monastic remain is a flight of stone steps within the church. Like the pier, the steps are thought to date to the 13th century. 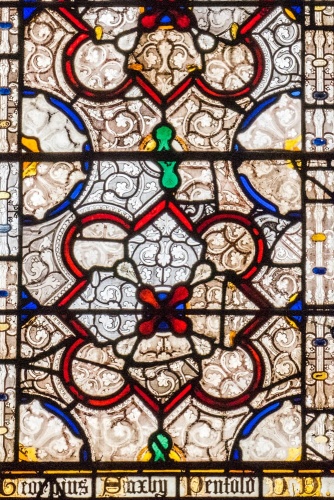 To the left of the sanctuary, in front of the altar rail, is a memorial tablet with a cross and the name 'Maria', thought to be one of the nuns. Inside the altar rail is a stone seat from the priory, now used as the bishop's chair.

There are a few old gravestones in the churchyard. The oldest is that of Robert and Ann Medd, dating to 1710. Several other Medd family graves are nearby.

The church/priory stand on Village Green, beside the school. There is no dedicated parking but it is relatively easy to park along the road. The church is normally open to visitors and was open when we visited on an overcast day in summer.

Self Catering near Rosedale Abbey