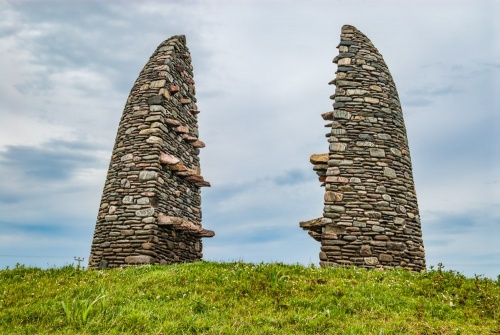 At the eastern end of the Braigh isthmus, east of Stornoway on the Isle of Lewis, stands a striking memorial to the Aignish Farm Raiders, the brave men and women of the Point area of Lewis who risked imprisonment in their struggle against an oppressive system of land use and ultimately paved the way for reforms to Scottish law.

Like so many places in the Scottish Highlands and Islands, the residents of Lewis suffered terrible hardships during the Clearances, as crofting families were forcibly removed from land their ancestors had farmed for generations in favour of more profitable sheep and cattle farming.

By 1888 the men and women of Point were living in poverty, kept off the land they considered theirs by right, and oppressed by a system of government that favoured wealthy landowners over the needs of the inhabitants. 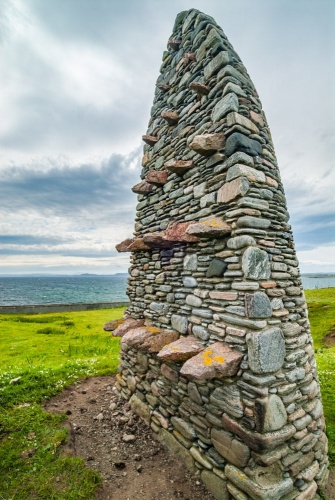 On 9 January 1888 a large band of men and women seized control of Aignish Farm. The government, rather than try to understand the desperation that had driven the land raiders to such a step, brought in the military to take back control of the farm.

Fourteen raiders were arrested, though one was later released. The courts had no sympathy for the plight of the raiders and sentenced them to prison terms ranging from six months to fifteen months.

Here are the names of the Aignish Farm Raiders as recorded on the memorial:

Arrested but later released was:
William Crichton, aged 28, of 11 Swordale 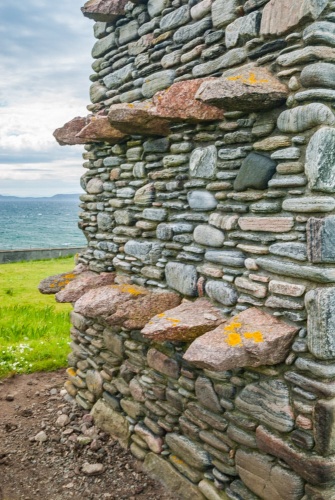 A closer look at the monument

So, did the farm raid fail?

Yes, in the short term, for the government troops took back Aignish Farm and sentenced the raiders' ringleaders to prison terms, but the raid is still considered a pivotal moment in the struggle for land rights.

The publicity raised by the raid and the heavy-handed government response, followed by the subsequent trial of the raiders, brought the desperate plight of the people of Lewis to the attention of the wider world. That publicity helped shift attitudes and, eventually, force changes in the law.

In 1905 the government caved in and divided Aignish Farm into crofts. Many of the raiders were dead at that point. As the plaque at the memorial so poignantly puts it: 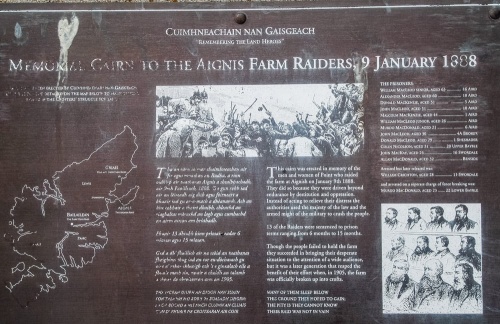 The plaque to the Aignish Farm Raiders

The Aignish Farm Raiders Monument is one of three similar memorial sculptures commemorating the struggles of Hebridean families for land rights in the face of opposition from the government and landowners. There are further memorials at Balallan (NB2619) and at Gress (NB4639).

The sculptures were designed by Will Maclean and built by local stonemason Jim Crawford in 1995.

The Aignish Farm Raiders Monument stands on the north side of the A866 as you enter Aignish from the direction of Stornoway. As you travel east along the A866 you will pass the Braigh Beach car park on your right, then a large burial ground comes into view on your left. The memorial is on a low hill immediately beyond the end of the burial ground.

There is a large lay-by in the eastbound lane and a signposted footpath from the lay-by to the monument. The footpath is marked by a blue pedestrian sign to St Columba's Church, a roofless medieval church on the site of a Celtic chapel founded by a follower of St Columba.

Nearby accommodation is calculated 'as the crow flies' from Aignish Farm Raiders Monument. 'Nearest' may involve a long drive up and down glens or, if you are near the coast, may include a ferry ride! Please check the property map to make sure the location is right for you.