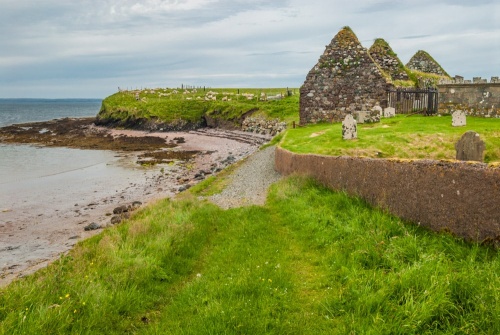 Standing on the edge of a crumbling shoreline at Aignish, near Stornoway, is the ancient church of St Columba Ui, known in Gaelic as Eaglais na h-Aoidhe. The roofless church dates to the 13th century and probably stands on the site of a much earlier cell established by St Catan, a 6th-century disciple of St Columba.

Catan became the Bishop of Bute, and there are numerous churches dedicated to him throughout the Highlands. Clan Chattan, including the Mackintosh and Macpherson branches, are part of this clan, whose name comes from the Gaelic for 'servant of St Catan'.

No trace of Cattan's chapel remains. Clan Macleod built the eastern body of the church and as many as 18 clan chiefs lie buried there. 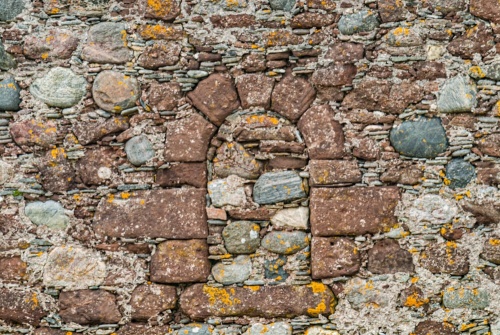 Among these chiefs was Roderick Macleod VII, who died in about 1498. A well-preserved grave slab carved with an effigy of Macleod now lies in a modern shelter at one end of the ruined church.

Nearby is a grave slab thought to depict Macleod's daughter, Margaret Mackinnon. You will sometimes see this second grave slab referred to as commemorating Macleod's first wife, also named Margaret. Together, these grave slabs are among the finest of the period to survive in the west of Scotland. 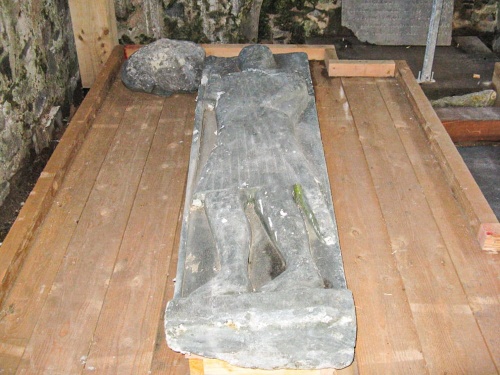 He married Margaret, the daughter of John Macleod of Dunvegan. In 1481 their son fought and died at the Battle of the Bloody Bay near Tobermory, on Mull, supporting John, Lord of the Isles, in the struggle with his illegitimate son, Angus Og. This son died at Dunvegan Castle of his wounds.

When Margaret Macleod died, Roderick Macleod married Agnes, the eldest daughter of Kenneth Mackenzie IX of Kintail. Together they had at least two sons and one daughter.

Roderick Macleod was succeeded by his eldest son Torcall, whose estates were seized by the Crown in 1505 after he refused to hand over Donald Dubh, the fugitive son of Angus Og. Torcall's son John was disinherited by James IV and his estates were given to his uncle Malcolm. Under Malcolm, the Macleods of Lewis had their estates returned.

Roderick Macleod VII also had a daughter named Margaret, who married Lachlan Mackinnon. One of their sons was John Mackinnon, the last Abbot of Iona. Margaret's grave slab lies near her father's in St Columba's Church.

Another medieval relic inside St Columba's Church is the Sword Stone, a coffin-shaped relief carving of a sword set into the ground. This stone was traditionally said to be linked to the Templar order of knights but is more likely to indicate the burial place of the clan chiefs. At least one local historian has suggested that the sword symbol was used to mark the resting place of a chief who was remembered as being an exceptional swordsman. See the BBC story.

The church was altered in the late medieval period and the Macleods added a burial aisle at the western end of the building. 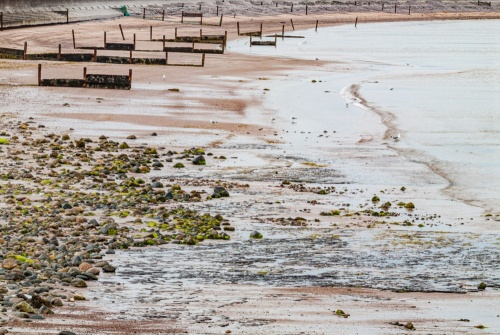 Coastal defences now protect the church from the sea

St Columba's Church is built to a very simple rectangular plan with a nave and chancel separated by a rood screen and a sacristy accessed by a narrow doorway. The church stood in a large burial ground.

At the time it was built, it would have stood a long distance from the sea, but over the centuries the constant battering of the coastline by wind and waves has eroded the cliffs so that today the churchyard is on the very edge of the sea cliffs. This exposed location has led to concerns that the church might be lost. Local groups have installed a system of coastal defences in an attempt to protect the ancient monument.

The church is undergoing a slow process of restoration under the auspices of a local charity. When we visited, the charity had locked the outer gates, but we understand that the church is now open to visitors again.

On a hillock overlooking the church stands the Aignish Raiders Cairn, commemorating the Pairc Deer Raiders, whose struggle to right the wrongs of the Highland Clearances helped ease the plight of landless crofters and bring about much-needed social change.

St Columba's Church Ui stands at the eastern end of The Braigh, a narrow isthmus of land connecting Stornoway to the Eye Peninsula. Carry on past the Braigh Beach car park and park at a lay-by on the left, where there is a signposted footpath to the Pairc Memorial and Eaglais na h-Aoidhe.

The photo of Roderick Macleod VII's grave slab is (c) MJ Richardson and is republished with gratitude under a Creative Commons license.

Nearby accommodation is calculated 'as the crow flies' from St Columba's Church, Ui. 'Nearest' may involve a long drive up and down glens or, if you are near the coast, may include a ferry ride! Please check the property map to make sure the location is right for you.

Self Catering near Stornoway