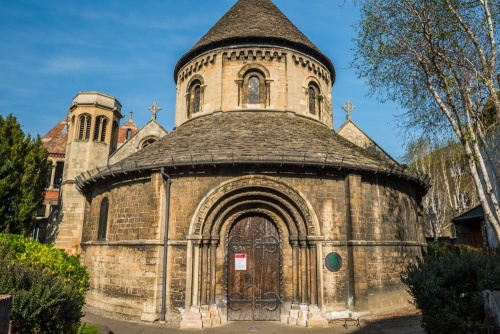 Though it is called the 'Round Church', this delightful historic building is actually composed of several parts. The oldest - the round bit - was constructed in 1130 by the Fraternity of the Holy Sepulchre, a religious guild of local merchants. Think of them as a sort of 'Rotary' club of the 12th century.

The round design of the church was inspired by the circular Church of the Holy Sepulchre in Jerusalem, built by Constantine the Great in the 4th century and widely regarded as one of the holiest sites in Christendom. 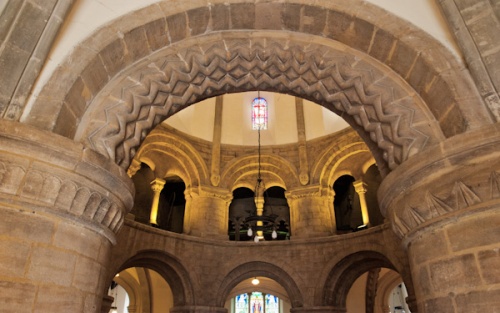 Why round, when most European churches are built more or less in a cross shape? The round shape was believed to represent resurrection since Constantine's church was thought to stand over the site where Jesus was buried, and where he subsequently rose from the dead. Given this symbolic meaning, it is perhaps surprising that more English churches were not built to a round design.

Today only four medieval round churches survive in England; The Round Church in Cambridge, Temple Church in London, St John's Church in Little Maplestead, Essex, and Holy Sepulchre in Northampton.

All four of these round churches were constructed after the First Crusade of 1097, so presumably, the returning Crusaders brought back stories about Constantine's church and these ideas influenced the builders of the new churches. The circular ambulatory is also symbolic of the circle of life, followed by death, and finally resurrection.

The Fraternity of the Holy Sepulchre was granted land by Abbot Reinald beside the old Roman road from Colchester, the Via Devana, one of the main roads into Cambridge (now Bridge Street). The architecture of this early church was Romanesque, with heavy, rounded pillars and wide, curving arches.

There is an inner round space, or nave, set off by eight thick pillars from a wider ambulatory which allows passage around the entire perimeter of the central space. 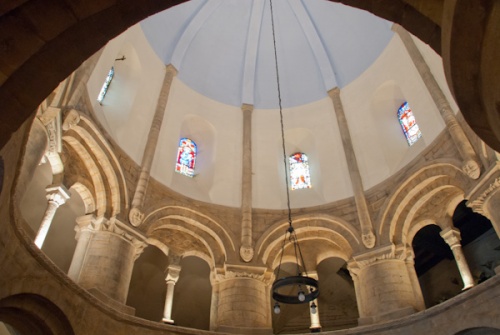 Looking up from the nave

This was not a 'normal' church, designed to serve a parish, but rather a wayside chapel, or oratory. However, the Fraternity did not survive, and sometime before the mid-13th century Holy Sepulchre became a 'proper' parish church, served by Augustinian monks from the Hospital of St John.

To accommodate the congregation, a chancel and north aisle were added to the original circular design. In the 15th century, a beautiful wooden roof was built, decorated with carved figures of angels.

Some of the carving detail is difficult to make out, as the angels were subsequently painted black, but enough remains to be impressed by the considerable skill of the medieval woodcarvers.

Also in the 15th century, a heavy tower in the then-popular Gothic style was added over the nave. The tower proved quite literally 'heavy' and caused the ambulatory to partially collapse in 1841. 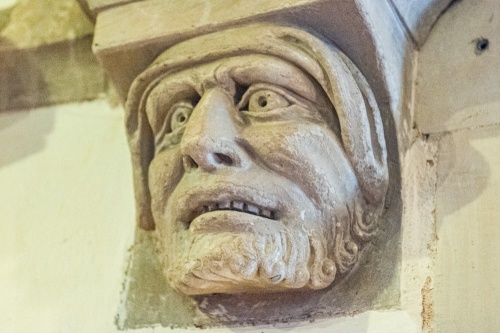 Holy Sepulchre seemed in imminent danger of collapse when a saviour stepped in to restore the church. The restoration was the work of the Cambridge Camden Society, who only undertook the essential rebuilding on condition that they were given a free hand. At that time there was a strong belief, fostered by such writers as John Ruskin, that the early medieval Gothic, or Early English style of architecture was the perfect expression of religious architecture.

The Society was convinced that they had a mission to recreate the 'perfection' of Early English design, which in their eyes required a church to have a nave and chancel with a chancel arch between, a porch attached to the nave, and a vestry attached to the chancel.

All these features were built into the restoration plans. The Camden Society called on Anthony Salvin, a leading architect with experience in restoring medieval castles. Salvin got rid of the 15th-century windows and replaced them with new ones in Norman style. He tore down the central tower and replaced it with a conical bell turret.

In a zealous attempt to recreate their vision of medieval Christian perfection the Society inserted a stone altar and a credence table in the chancel. To a modern reader, this might seem so innocuous as to be hardly worth a mention. But to zealous Victorian Christians, this was an act tantamount to trying to roll back the English Reformation.

The local vicar objected and took his objections to the ecclesiastical courts, who agreed with him and the Society was forced to back down. They replaced the altar with a wooden version, which we can see today. 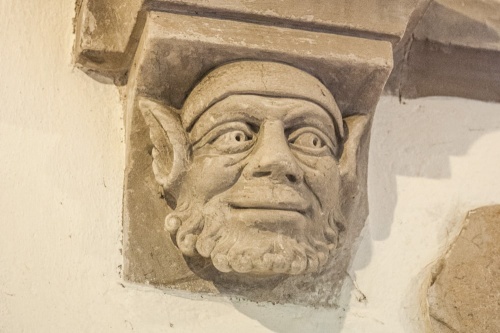 Interestingly, this turmoil and court case caused the Cambridge Camden Society to go through a period of upheaval, and almost collapse itself, before being reborn as the Ecclesiological Society, in which guise they were one of the most influential voices for church restoration throughout the Victorian period. They influenced designers, architects, and laypeople alike, and are still an active organisation today, helping to preserve and restore historic churches.

But so thorough were the Victorians that one critic was moved to write of Holy Sepulchre that there was 'not one old stone left'. That may be overly critical, for the carving inside the nave and in the ambulatory is simply superb, but it is worth noting that the church as we see it now is very much a Victorian vision of the original Norman work. Having said that, the west doorway arch, through which you enter, is wonderful, with three orders of Norman zigzags and scalloped capitals.

The Victorian restoration included the addition of a south aisle and a separate bell tower. They also inserted a stained glass east window, which was damaged by bombing during WWII and replaced with a modern window.

Much of the Victorian stained glass remains, however, and it is well worth a look. Many of the windows were designed by Thomas Willement and William Wailes, two of the most prominent Victorian artists working in what the Society called an 'archaeological' style. 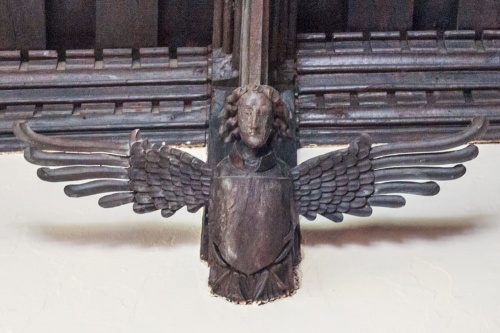 By 1994 the small church was simply inadequate to handle the sizeable congregation, and they moved to St Andrew the Less. After a time in limbo, the church was taken over by the Christian Heritage charity, which keeps it open to visitors.

Christian Heritage offers regular guided walks of Cambridge, and have erected displays around the church telling the story of the church and Christianity in the history of Cambridge.

As of this writing, the church is open every day during daylight hours. There is a small admission fee, though to be honest, it is so small as to be almost absurd given the historical interest of this wonderful church.

Visiting The Round Church

This is one of the most enjoyable small churches in East Anglia. The interior is not replete with furnishings; you can see the bones of the building in the nave and ambulatory. The aisles are more crowded and probably of less interest to most visitors, though the carved angel roof is well worth a look. But it is the marvellous circular nave and ambulatory, with the wonderful medieval carvings, that make this such an enjoyable church to visit. A real gem.

The Round Church is extremely well signposted around central Cambridge. It is a very short walk from King's Parade and Magdalene Bridge, to name just a few popular tourist landmarks. 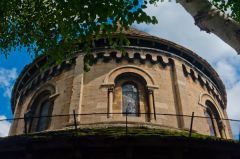 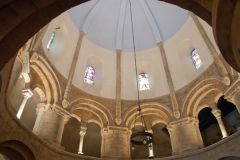 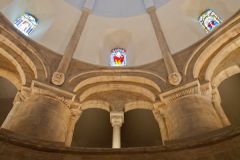 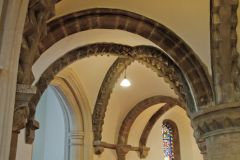 Nearest Accommodation to Round Church:

More self catering near Round Church

More Hotels near Round Church

More bed and breakfasts near Round Church