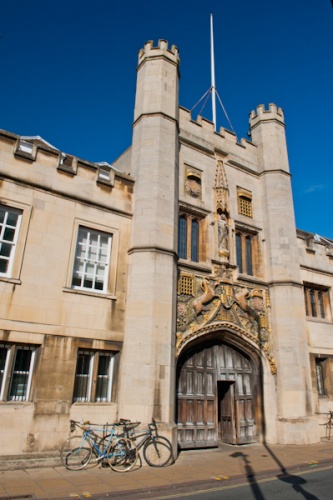 Christ's College was originally established in 1437 by William Byngham, who called his establishment God's House. In 1448 the college moved to its present location after Henry VI decided that he needed the original site for his new King's College.

In 1505 God's House was re-dedicated as Christ's College under the patronage of Margaret Beaufort, mother of Henry VII. Lady Beaufort's contribution to re-founding Chrit's is remembered in a number of statues, crests, and other architectural features sprinkled liberally about the college buildings.

The college is entered through an imposing 16th-century Gatehouse, still boasting its original oak doors. Above the entry is a statue and coat of arms of Lady Beaufort.

The college is laid out in a series of four courts. First Court is the oldest part of the college, dating to the 15th century. The range between the Gatehouse and the Chapel formed part of the original God's House and were built between 1448 and 1452. The buildings in First Court do not look their age as they were refaced with stone in the 18th century.

The Dining hall is an early 16th-century building. Though it was remodelled in the late Victorian period the hall retains its original roof and a 16th-century portrait of the foundress.

Second Court gives access to the wonderful Fellow's garden, arguably the finest such garden in any Cambridge college. The site has been owned by the college since 1554, but the present garden was established in 1825.

In the garden is Milton's Mulberry Tree, planted in 1608 (the year of Milton's birth) as part of an attempt to encourage the English silk industry. Legend has it that Milton composed Lycidas under the tree. Nearby are a bathing pool and summerhouse that have stood here since at least 1763.

Like several other Cambridge Colleges, Christs' has its resident ghost; an elderly man dressed all in black is occasionally seen walking in the Fellow's Garden.

More self catering near Christ's College