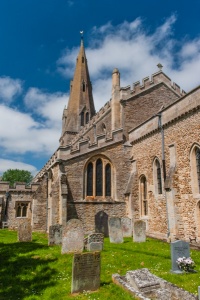 You'd almost expect Alconbury to be a busy place; the village lies immediately south of the A14 junction with the A1(M), but in fact, it's a quiet place, with a sense of peace and countryside contentment. The church of St Peter and St Paul stands in a large churchyard set with large trees.

The church dates to the 12th century, though most of the current building is the result of 13th century rebuilding. Henry II granted Alconbury to Merton Priory in Surrey, and the first recorded vicar was installed about 1220. At the Dissolution Henry VIII granted the living to Westminster Cathedral, and the advowson has stayed with Westminster ever since. 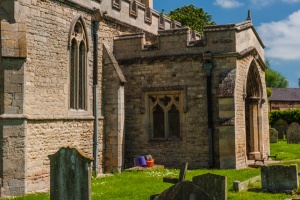 The 13th-century core of Alconbury church is best appreciated from the east exterior, where you can see three narrow lancets. Rising above are 15th century dressed stone and 17th-century battlements.

You can still make out the 14th-century gable left exposed when the roofline was lowered in the 15th century. In the north wall is a blocked 15th-century doorway with a trefoil top, filled in with 17th-century bricks. The interior of this doorway is blocked with fragments of 14th-century arcading.

On the south chancel wall is a blocked door, and at the foot of the door is a worn stone slab that once covered the grave of Anthonina (nee Barlow), wife of Bishop Wickham of Winchester, who died in 1598. Above, lining the eaves, are wonderful grotesque carvings, some depicting demons.

The south porch is 13th century, with some 15th-century additions, and the west tower is also 13th century as is the lovely broach spire that tops the tower. The tower had to be restored in 1877, which involved supporting the spire while the tower was totally rebuilt under it; a remarkable feat of engineering financed by the squire, George Rust of Alconbury House. 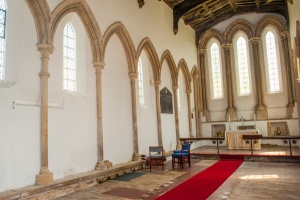 Much of the church interior is Early English, save for the 13th-century chancel. The chancel is the most architecturally interesting part of the church, an untouched and very pleasing example of Early English work, with arcading along the walls and carved corbels on the west wall. The corbels are supported by carved demi-figures of men.

The style of carving suggests that they are caricatures of real local people. Over the blocked chancel door are traces of wall painting. Under the east window is a trio of recessed openings used for storing church plate. The chancel roof is 15th century, decorated with carved bosses and angels with wings outstretched.

The nave roof is later, 16th century, and less elaborate than the chancel, but still a nice example of Tudor work. Aside from the roof most of the nave is 14th century, with an arcade of four bays. The south aisle has very good windows; one Decorated, one Early English, and one Perpendicular. There is a tomb recess set into the wall beneath the Perpendicular window.

At the east end of the nave is a 17th century communion table. The pulpit is modern but it rsts on 15th century stone butresses with crocketed pinnacles. The font is 15th century but has been heavily restored. 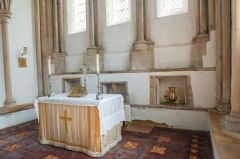 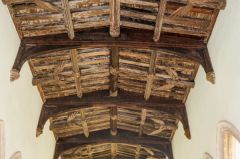 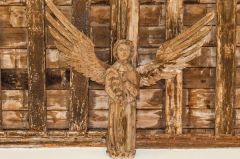 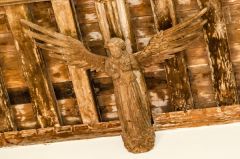 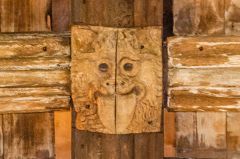 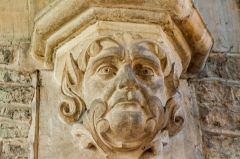 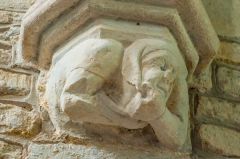 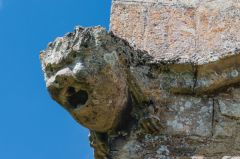 More self catering near Alconbury

More bed and breakfasts near Alconbury