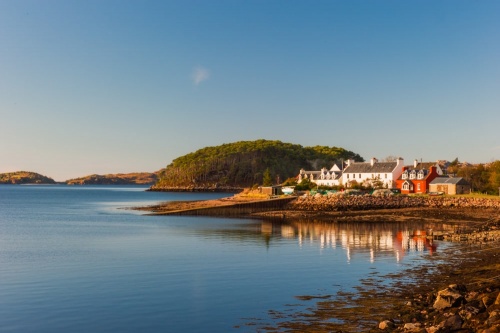 The picturesque village of Shieldaig is a fishing port on the shore of Loch Shieldaig, a sea loch that links the village to Loch Torridon. The name comes from the Norse 'sild vik', which translates as Herring Bay.

In a way, Shieldaig owes its existence to Napoleon. At the height of the Napoleonic Wars, the Royal Navy needed well-trained sailors to combat the French. In 1810 the Royal Navy established Shieldaig as a training base for seamen and laid out the street plan. Scots pine were planted on Shieldaig Island to create a supply of timber for ship masts.

Napoleon was defeated before the men trained at Shieldaig were called into service and the village underwent a transformation, becoming a centre for the herring fishery. Most of the original 19th-century houses survive intact.

Perhaps the most interesting historical building in Shieldaig is Kirkburn, the former Church of Scotland Manse, designed by the famous Scottish engineer and architect Thomas Telford and built from 1825-27. 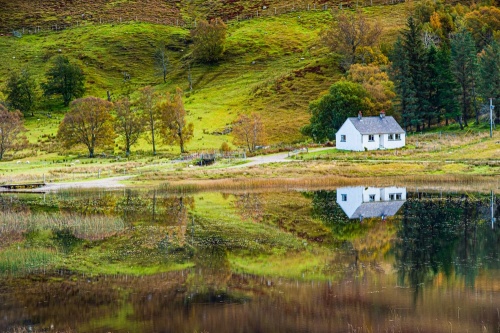 This was one of Telford's simple 'Parliamentary' designs, so-called because they were part of Parliament's concerted effort to build churches and associated manses across Scotland in the early 19th century.

The village is home to a thriving fishing industry -- not based on herring anymore, but on salmon, mussels and 'prawns' (actually a form of small lobster called nephrops). You can buy fresh catches from several outlets near the pier. 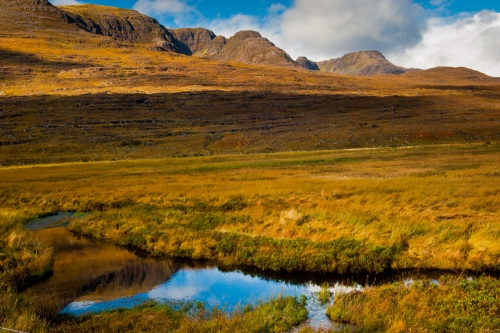 In the middle of Loch Shieldaig, offshore of the village, is Shieldaig Island, owned by the National Trust for Scotland and maintained as a nature reserve. The pine trees planted by the Royal Navy were never harvested. The island is home to nesting sea eagles as well as other bird species such as mergansers, kestrels, guillemots, and herons.

A few miles to the north is another National Trust for Scotland estate at Torridon, home to some of the finest walks in the Highlands, with several Munros (mountains over 3,000 feet). At the head of Loch Torridon is the Torridon Countryside Centre, where you can learn about the area's unique geology, its wildlife, and the best places to explore the stunning scenery. 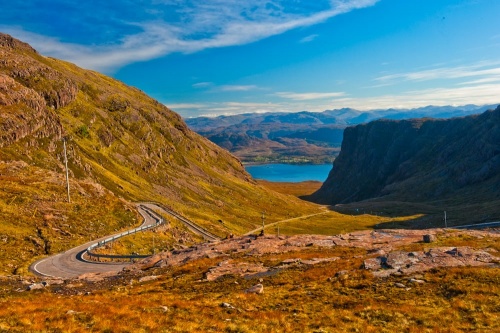 Shieldaig is the northern terminus of a magnificently beautiful circular route that climbs the famous Bealach na Ba (The Pass of the Cattle) before descending to the sea at Applecross and following the coast of the Applecross Peninsula back to Shieldaig.

This is the most beautiful road trip our family have ever driven in the UK and must be one of the finest routes in the world for its mix of remote mountain and loch scenery. We recommend driving the route in a clockwise direction (that is, from Shieldaig, go south on the A896 through Glen Shieldaig before turning off towards Applecross.)

Shieldaig is on the A896 north-west of Lochcarron and west of Torridon. There is easy parking on Mary Street, near the jetty.

Nearby accommodation is calculated 'as the crow flies' from Shieldaig. 'Nearest' may involve a long drive up and down glens or, if you are near the coast, may include a ferry ride! Please check the property map to make sure the location is right for you.