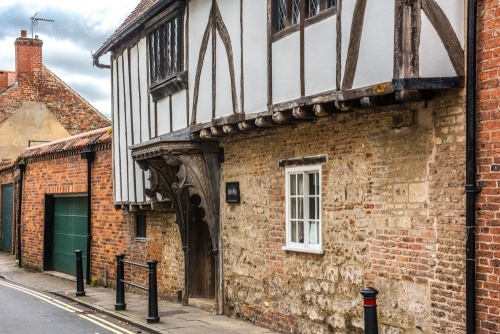 Just off Micklegate in York stands a beautiful 15th-century timber-framed building known as Jacob's Well. The building serves as the parish room for the neighbouring church of Holy Trinity Micklegate and is an atmospheric venue for private functions.

Jacob's Well was built in the late 15th century and enlarged in the early Tudor period. It was originally an open hall house with a two-storey cross-wing facing onto Trinity Lane. This style of medieval building is unique in York.

Around 1100 AD a Benedictine priory was established just inside Micklegate Bar, the western gateway to the city of York. In 1474 Jacob's Well was erected on the eastern edge of the priory precinct. 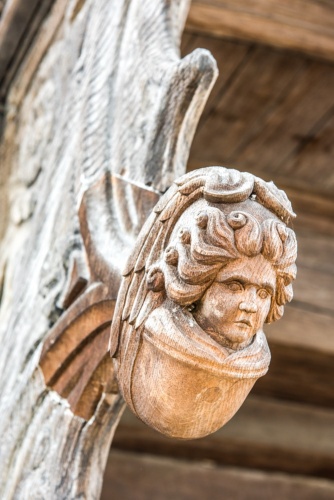 The founder was a York alderman named Thomas Nelson, who gave money to build a residence for a chantry priest whose duty it was to pray for the souls of Nelson and his family three times a week in the neighbouring priory church.

The chantry priest's 'lodging chamber' consisted of a hall open to the roof joined to a wing fronting onto Trinity lane. The front entrance was at one end of the wing.

A jetty extended out over the entrance. This now meets the jetty on Trinity Lane at a timber post at the angle between the walls. This is known as the dragon post, which supports a 'dragon beam'. 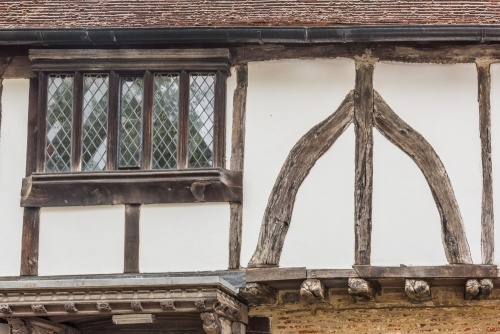 In 1549 the house was purchased by Isabel Warde, the last prioress of Clementhorpe Nunnery, as a residence for herself and her sister. The Warde sisters also had a brother who served in the Priory before its dissolution.

Clementhorpe Priory stood on the west bank of the River Ouse between Clementhorpe to the north and Ebor Street to the south. It was founded by Archbishop Thurstan of York in the middle of the 12th century. It was never a large house, usually maintaining just seven or eight nuns, but it seems to have had its fair share of issues with discipline; several medieval nuns were accused of incontinence (sexual impropriety) and at least two are known to have run away with their lovers. 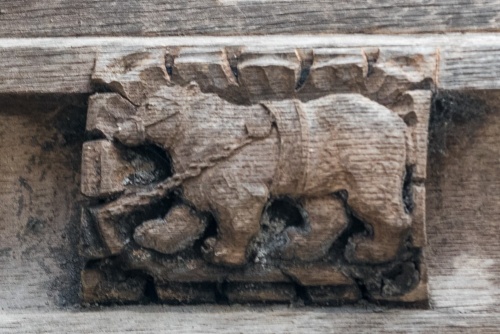 Carving of a bear in chains

In 1566 Isabel Warde gave the house to Holy Trinity Micklegate Church on condition that she be allowed to live there for the rest of her life. Her annual rent was a single red rose, payable each Midsummer Day. On Warde's death in 1569 the house reverted to the church trustees.

We don't know how the building was used until 1633 when Henry Rogers, the church rector, was living there while a new rectory was built. It was probably Rogers who was responsible for the beautiful carvings on the house entrance. He also installed a floor in the open hall, turning it into two storeys, and inserted two mullioned windows. Sometime around the same period, a pair of fireplaces were inserted, one on each end of the cross-wing. 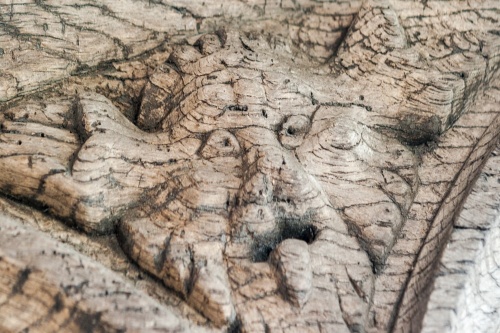 The building was serving as an inn by 1749. It was around this period that the name Jacob's Well began to be used. By the late 18th century Jacob's Well was leased to a pair of 'coach masters', with a stable, granary, and coach house on the opposite side of Trinity Lane.

The coach masters paid for fire insurance, and you can see a Sun Insurance firemark on the exterior near the kitchen. These firemarks are a reminder of the days before civic fire services when shopkeepers and homeowners paid insurance to private companies who each had their own firewagon. 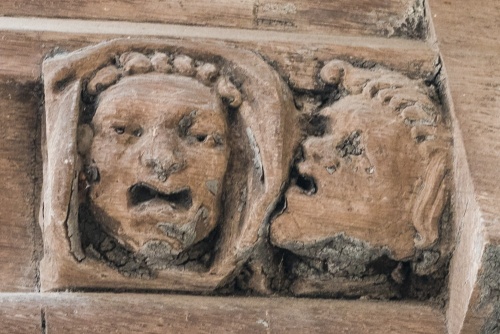 A pair of grotesque faces

Jacob's Well reverted to an inn in the early 20th century. In 1905 the building was restored and the front door was rebuilt using brackets rescued from the Wheatsheaf pub in Davygate, which had to be pulled down.

In the late 20th century the house came under risk due to traffic waiting outside the building to turn onto Micklegate. Part of the Grade I listed structure had to be demolished for the sake of the remainder - one of the rare occasions when English Heritage has approved the destruction of a listed building.

Unless you are fortunate enough to hire the hall or be invited to a formal function inside Jacob's Well, you will have to be content with examining the building from Trinity Lane. The main feature of interest is the beautifully-carved entrance with its projecting canopy over the door. Every surface is carved with figures and foliage decoration. There are grotesque, grimacing heads, smiling faces, peculiar beasts, nuts, flowers, geometric designs, serpents, and a bear in chains.

Jacob's Well is a wonderful example of a late medieval timber-framed building, set in a quiet street yet close to the River Ouse and the city centre. 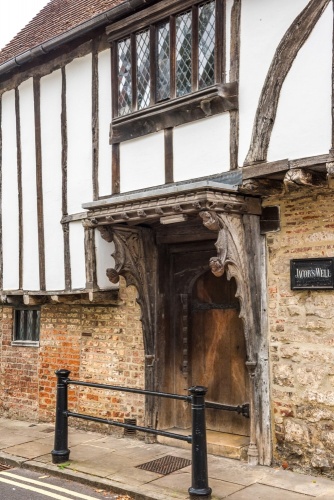 The house entrance on Trinity Lane

Jacob's well is on Trinity Lane, just off Micklegate and around the corner from Holy Trinity Micklegate Church. there is no on-street parking but there are several pay and display parking areas nearby. The house is a very short stroll from Micklegate Bar and the city walls.

It will not take long to examine the house exterior. Jacob's Well is perhaps not worth making a special trip to see unless you really enjoy historic architecture (like I do) but it is well worth taking a few minutes diversion if you are visiting Holy Trinity Micklegate, Bar Convent, or the Henry VII Experience at Micklegate Bar.