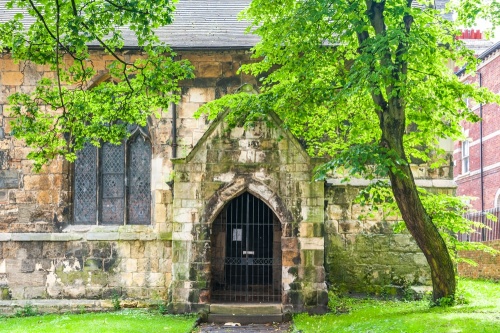 St Martin-cum-Gregory is a redundant medieval parish church near Micklegate that now seres as a stained glass centre.

The first thing you notice about St Martin's is the striking 17th-century red-brick tower, which makes the church seem much more modern than it really is. Looks can be deceiving, though; the tower is merely clad with brick and dates to the medieval period.

The oldest part of the church is the nave, built in the 11th century, possibly before the Norman Conquest. The arcades are 13th-century insertions and the north aisle was added in the 14th century. Sometime around 1430 the chapel, arcades, and chancel were completely rebuilt. 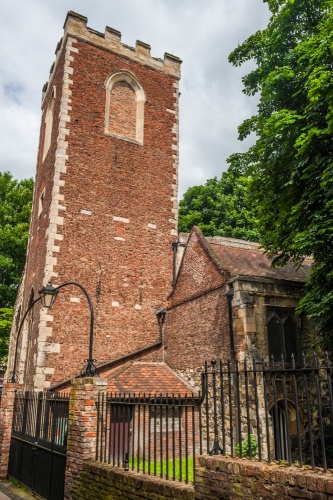 A north porch was added in 1655. Twenty-two years in 1677 later the west tower was in poor repair and was restored and re-faced in red brick. The top section of the tower was rebuilt again in 1844 and the entire church was restored in 1875.

Interior highlights include a Jacobean pulpit, 15th-century font, and Georgian breadshelves. In the north chancel is a window commemorating William Peckitt (d 1795), described as a 'glass painter and stainer'. Peckitt must have passed on his knowledge of glass painting to his wife, for the inscription tells us the window was 'designed and erected' by his widow.

William Peckitt designed the easternmost window in the north aisle three years before his death, in 1792. The centre light depicts the Resurrection. The two lights flanking this scene feature 14th-century glass showing St John the Baptist and St Katherine. These panels were salvaged from the former chantry chapel of Richard Toller, a wealthy merchant, established around 1330.

When St Martin-cum-Gregory was made redundant it initially served as a public venue. Then in 2008, it was transformed into The Stained Glass Centre, a national centre for rediscovery and interpretation of the art of crafting stained glass.

The Centre offers York residents and visitors the chance to see some of the finest medieval glass in England, to try glassmaking for themselves, to learn about the history of stained glass making, and to give stained glass artists from across Britain a place to study and hone their craft. The Centre has regular lectures, walking tours, and stained glass workshops.

The Stained Glass Centre is on St Martin's Lane, between Micklegate and Fetter Lane. The nearest car parks are at Nunnery Lane, St. George’s Fields and York Castle. All are roughly 10-minute's walk from the Centre.

The Centre has limited opening hours; it is usually only open in the summer months.

More self catering near St Martin-cum-Gregory