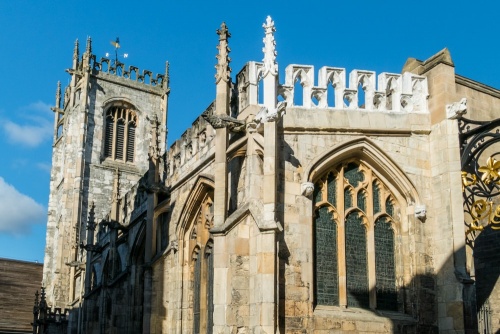 A church with two names; St Martin's is known both as St Martin-le-Grand and St Martin Coney Street. It is one of York's oldest churches, dating to at least the 11th century and possibly much earlier. It stands on Coney Street, which around 1000 AD was lined with the houses of wealthy merchants.

The original church was of timber, but about 1080 it was rebuilt in stone. It was extended several times in the medieval period and completely rebuilt in the mid-15th century, largely through the efforts of Robert Semer, who served as vicar from 1425-1443. Semer is commemorated as a benefactor in the surviving west window.

On 29 April 1942, a bomb struck St Martins and almost completely destroyed the medieval building. Only the tower and south aisle survived the blast. The surviving parts of the structure were rebuilt and re-hallowed in 1968. 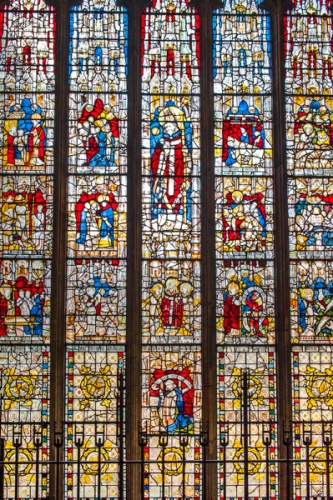 The glory of St Martins is a 15th-century stained-glass window depicting the life of St Martin. It was removed from the church in 1940 for safekeeping and returned during the post-bomb restoration. The window is directly opposite the main visitor entrance and is set at eye-level.

An iron railing keeps visitors at arm's length to protect the precious glass, but it is a rare treat to be able to see such a wonderful collection of 15th-century panels at such close range. The effect is absolutely stunning.

The figure of St Martin of Tours stands in the central light, surrounded by 13 scenes from his life, not in any particular order. Amidst other scenes we see the saint driving out a devil, riding a horse, standing unharmed in the middle of a battle, and being consecrated by a pair of bishops. We see him on his deathbed, his disciples about him, his soul being carried up to heaven by angels. 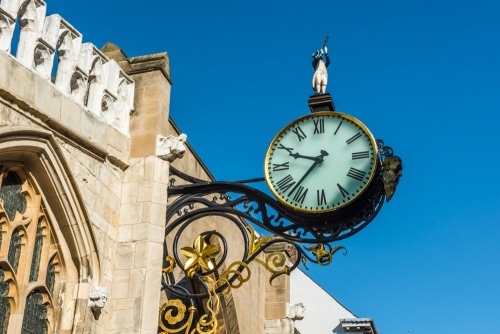 The figure of Robert Semer is shown in his clerical robes, an open Bible before him showing Psalm 51. A Latin inscription at the top of the window gives the date 1437 and begs the reader to pray for Semer's soul. When he died, Semer left his money to the church, on condition that it was rebuilt within seven years.

At the west end is the medieval font where St Margaret Clitherow was baptised in 1553. In 1571 she married John Clitherow, a butcher with premises in The Shambles. Clitherow (nee Middleton) converted to Catholicism, and was put to death for hiding a priest in 1586.

A Confusion of Names

The name was probably inspired by the London ward called St Martin's Le Grand, which again, must have seemed more posh to the congregation. Despite the dubious nature of the moniker, it is still frequently used, which seems to mystify and no doubt annoy the congregation today!

Overhanging the street facade is a picturesque clock, decorated with a naval figure often called 'the Little Admiral'. The clock dates to 1779 and replaces an even earlier clock of 1668. St Martin's is usually open daylight hours and is well worth a visit, if for no other reason than to see the extraordinary St Martin's window. 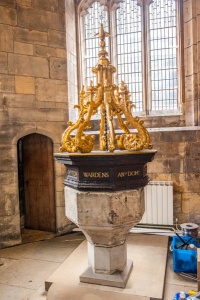 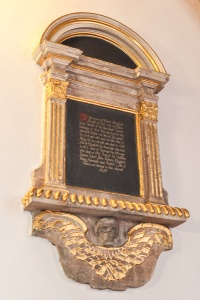 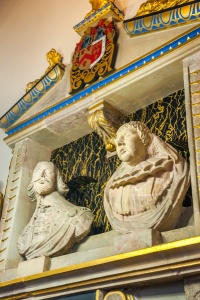 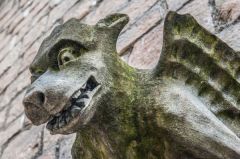 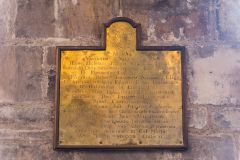