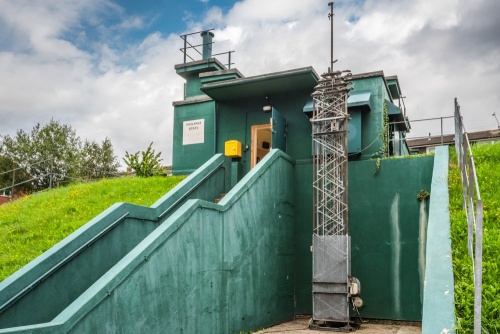 York Cold War Bunker
The most modern property in the care of English Heritage is a partly underground bunker constructed during the height of the Cold War as a military fallout shelter and command post in the event of nuclear war. The York Cold War Bunker is officially known as Number 20 Group Royal Observer Corps HQ and was in service for 30 years from 1961 until 1991.

The bunker was built to house 60 staff and was intended to act as an observation post for monitoring the effects of nuclear fallout in the Yorkshire area. The interior displays the original communication and monitoring equipment, plus special decontamination rooms and a peculiar sewage ejector system intended to help keep the bunker completely separated from the outside world.

A special guided tour helps interpret the bunker and tells the harrowing tale of the days when Mutually Assured Destruction was considered a very real and imminent possibility. 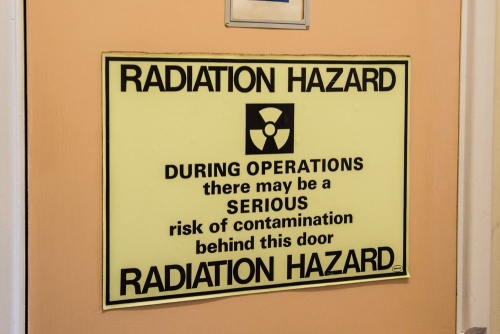 Only a small section of the Bunker is above ground; the entrance block and the emergency escape hatch. These exposed sections had to be built to withstand a nuclear blast. The walls and roof are made of reinforced concrete and all openings have steel baffle plates to deflect the blast. The blast door is reached by a set of concrete steps reminiscent of an Aztec temple. The door gives access to an airlock chamber to protect against radioactive particles.

This is the second-largest room in the Bunker, used not only for eating meals but for staff training exercises. It was the only place staff could use for leisure activities. Now used for a short film introduction for visitors. 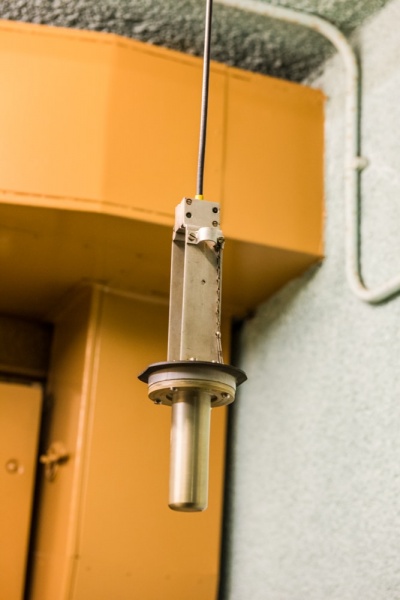 Linked to the canteen by a serving hatch. Includes a huge catering oven, cooker, hot plate, and water-heaters, plus cupboards for the crew to store their own supplies.

Next to the kitchen and canteen. Entirely taken up with air-conditioning equipment. If electricity was lost there was a diesel generator to give 40 days of filtered air. 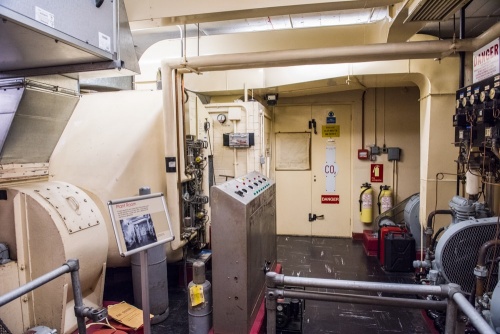 The bunker is lower than York's sewage system so the bunker needed a pressurized way to eject sewage. A blast of compressed air emptied one of two sewage tanks. The compressed air cylinder was replenished by an automatic air compressor.

The heart of the Bunker is the Operations Room, extending into the lower level. Information from outlying observation posts was plotted and displayed on huge maps. Levels of destruction and radiation levels were monitored so that civil and military authorities could be warned. Senior officers sat at the Command Table while Plotters sat in a gallery fitted with Perspex display boards.

In the well below sat Tellers, who distributed information to the outside world. Below the gallery were the ROC teleprinters and tape reperforators for transmitting data in the days before computers.

In the 1960s a remote sensing device known as the Atomic Weapons Detection Recognition and Estimation of Yield (AWDREY) device was fitted - one of 13 throughout Britain. The sensor was on the roof and the display unit was in the gallery. 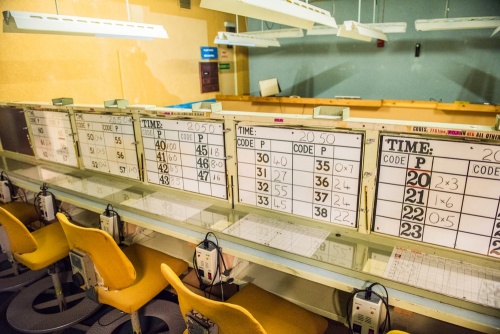 The Bunker had a staff of 50-60 ROC members, BT engineers, and scientists. Volunteers were divided into three crews, but there were beds for just 20. That meant that staff had to use a 'hot bed' system; as soon as one shift woke up and got out of bed, the beds were occupied by the next shift. You'd be getting into a bed still warm from the last person to sleep there. 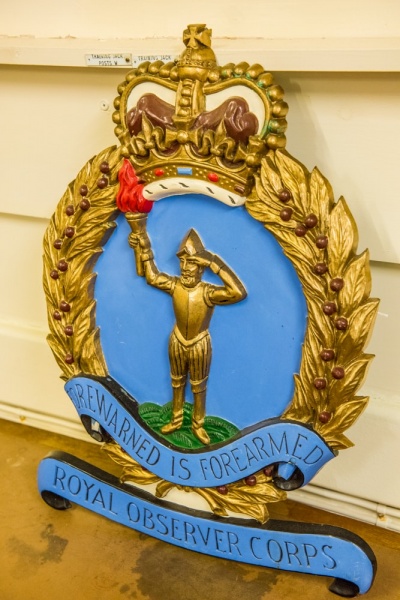 Two extremely basic toilets, one for females and one for males. Each is also fitted with a shower.

The Bunker was originally fitted with a manual telephone exchange manned by two GPO (General Post Office) volunteer operators. Most of the cables were laid underground to protect copper wiring from blast damage and Electro-Magnetic Pulse (EMP effects. As a fallback, the Bunker had a very high frequency (VHF) radio. 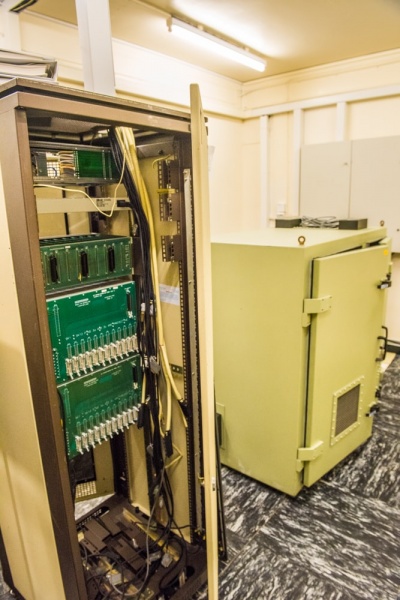 This small chamber held the cooling fan and radiator for the emergency diesel generator in the Plant Room below. It also holds a pair of CO2 fire-extinguishers. This room was vented to the outside and would have to be sealed in the event of a blast.

Beside the airlock door is a pair of decontamination chambers. Anyone exposed to radiation outside the Bunker would have to strip and shower in the first chamber, then wash again in the second chamber and be checked for radiation levels before dressing in clean clothing. 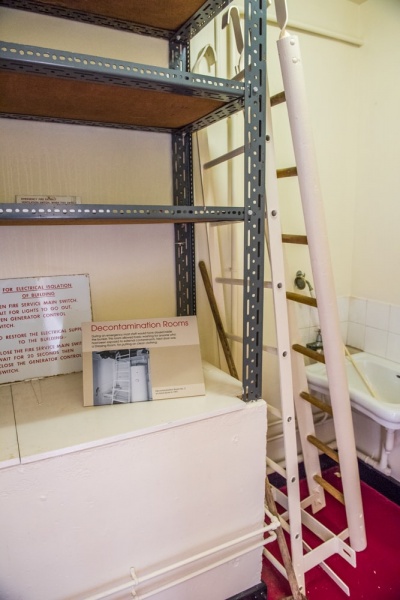 This room beside the entrance has two banks of filters to remove radioactive particulates from the air. These filters were not designed to be cleaned; once saturated they could not even be replaced, so they would have had to be used sparingly. This room also holds boxes of the service ration known as 'Biscuit Brown'. 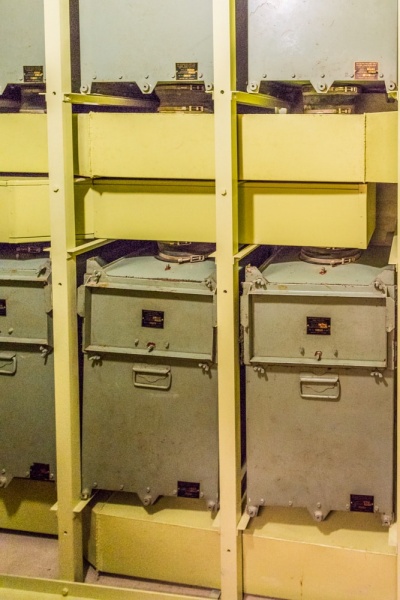 The York Cold War Bunker is tucked away in a housing estate two miles from the city centre, off Acomb Road. There is a very small parking area with room for only three vehicles. There is more free parking on Acomb Road, two minutes walk away.

The location is a bit problematic; it is too far to easily walk from other major attractions in the centre of York. It took me 20 minutes walking very quickly from Micklegate Bar, near the National Railway Museum, and I suspect it would take someone less determined up to 10 minutes longer to make the same trip.

Now, having said that, it is well worth making the effort to seek out the Bunker. I grew up in the Cold War, and stepping inside the Bunker is like stepping back into those terrifying days when the threat of nuclear war was very real.