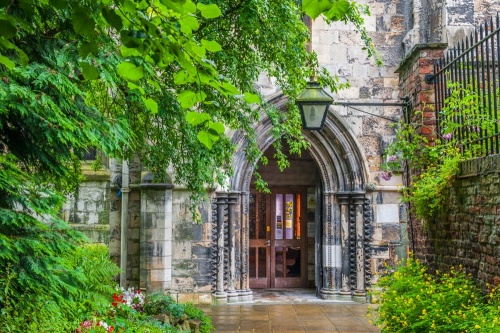 On the west bank of the River Ouse near the historic city gateway to York known as Micklegate Bar stands the medieval church of Holy Trinity Micklegate. The building we see today incorporates part of an earlier priory church and possibly parts of a neighbouring parish church dedicated to St Nicholas. Holy Trinity is the only monastic church in York to survive as a parish church.

Holy Trinity was founded in the late Anglo-Saxon period for a house of secular canons known as Christ Church. There were two important churches in York; the Minster, standing in the former Roman garrison, and Christ Church, serving the neighbouring civilian town, or colonia. This suggests that Christ Church and York Minster were founded around the same time in the 7th century.

It is recorded in the Domesday Book of 1086 when it was considered one of the five great northern churches that were exempt from payments to the king or earl. The others were York Minster, Durham, Ripon, and Beverley Minsters. Exalted company indeed, but the church was listed as being in very poor condition. The Domesday authors called it 'a ruined and poverty stricken church'! 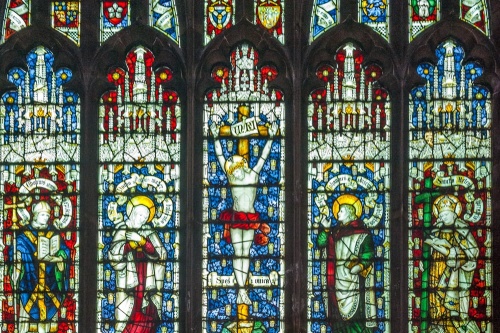 The east window by CE Kempe

Three years after the Domesday Book was published a Benedictine monastery was established near Micklegate by Ralph Paynel, the Sheriff of Yorkshire.

In the early 13th century a beautifully illuminated manuscript known as the Book of Beasts was written here. Many monasteries produced bestiaries, which were meant to illustrate moral lessons based on the characteristics of different animals. The original manuscript is now kept in St John's College, Oxford University. 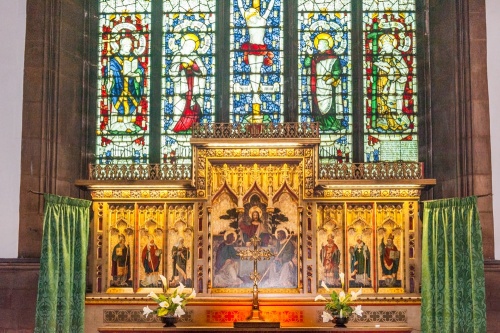 The monastery was suppressed by Henry VIII in 1536, and the former monastic church became the new parish church. The rest of the monastery was pulled down. Worse followed in 1551 when the central tower fell down during a storm. The nave was restored but was rebuilt on a smaller scale. Stone from the collapsed tower was used to repair the Ouse Bridge and the city walls.

The earliest part of the present building dates to the 12th century when the monastic church was rebuilt, wiping away all traces of the Anglo-Saxon building. Most of the stonework we see today dates to the 13th century. 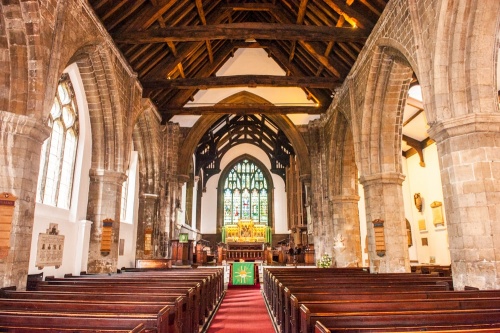 At the west end of the church is an exhibit on the Micklegate Priory and monastic life. Here you can see carved stones from the priory church.

The most interesting memorial is that of Dr John Burton (d 1771) and his wife Mary (also 1771). Dr Burton was a 'man-midwife' (an obstetrician) and the author of 'An Essay towards a Complete System of Midwifery' (1751). He was also the inspiration for Dr Slop in Laurence Sterne's famous novel 'The Life and Opinions of Tristram Shandy, Gentleman'. In the novel, Sterne lampoons Dr Burton as an incompetent and choleric quack.

There was real personal enmity behind Sterne's portrayal. Burton was a Catholic and a Jacobite sympathiser during the 1745 Jacobite Rebellion. Sterne's uncle, Rev Jacques Sterne, had Burton arrested on suspicion of sedition during the Rebellion. 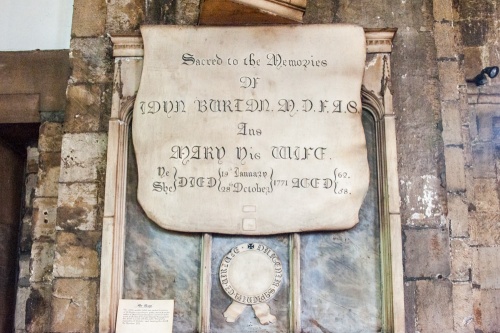 At the west end of the church is the Chapel of St Nicholas. Here you will find the font, brought here from St Saviour's Church. It is topped by a wooden cover crafted in 1717. Over the font is a single lancet window with glass depicting St Nicholas resurrecting three children who had been drowned in a vat of brine by an evil innkeeper.

On the north wall is a memorial to Captain Edwyn Walker, who served with the 15th Hussars, and his wife Elizabeth. The memorial tells the tragic tale of the couple's four children. Three died in WWI and the other was a barrister killed in a Point to Point horse race near Haslemere in 1910. 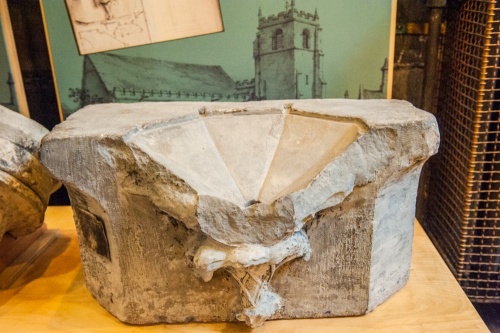 Behind the high altar is an exquisite gilded reredos depicting saints linked to the north of England, including, Hilda, Aidan, John of Beverley, Paulinus, Wilfrid of Hexham, and Cuthbert. Above the reredos is the colourful east window by Kempe depicting saints and important cleric associated with the city of York. The window was designed in 1907 and was one of Kempe's last works before his death in April of that year.

During the medieval period, Holy Trinity Micklegate was the starting point for the York Mystery Plays and the script for the play was locked in the church's parish chest for safekeeping.

In the churchyard stands a very large set of 18th-century stocks for punishing miscreants. Also in the churchyard and in the chancel are generations of nuns from Bar Convent, located just outside Micklegate Bar. The earliest burial dates from 1700. 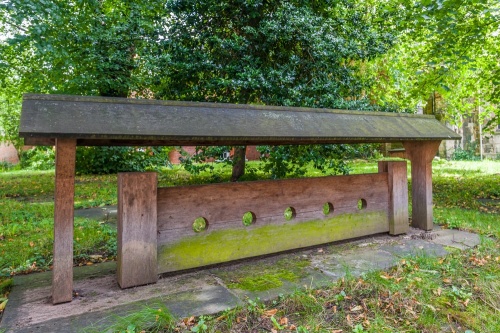 Around the corner from Holy Trinity on Trinity Lane is an attractive timber-framed 15th-century house known as Jacob's Well, which acts as the parish rooms for the church. Jacob's Well is known for the beautiful medieval carvings that adorn the projecting doorway frame.

Holy Trinity is on Micklegate between Priory Street and Trinity Lane. There is no dedicated parking but there are several pay and display car parks nearby. The church is about a 10-minute walk to the National Railway Museum and an equal distance from the River Ouse.