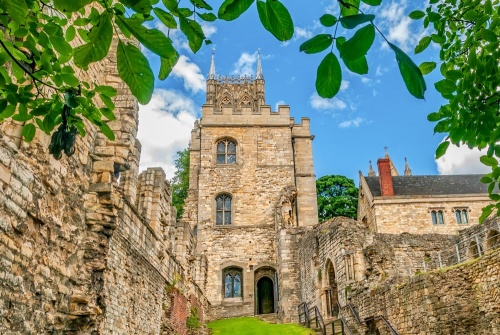 The medieval Bishop's Palace was the home of the powerful Bishops of Lincoln from 1150 until it was destroyed following the English Civil War. The medieval palace ruins stand a stone's throw from the cathedral.

Land on this site was granted to the diocese of Lincoln by King Stephen in 1135-38. The original buildings were erected by Bishop Chesney, whose layout consisted of upper and lower halls pierced slender lancet windows.

The east hall is worth noting, for it was one of the earliest examples of a domestic roofed hall in Britain. The palace was enlarged and remodelled by Bishop Hugh of Avalon, who was later canonized as Great St Hugh. St Hugh's memorial can be seen in the Angel Choir of the cathedral. 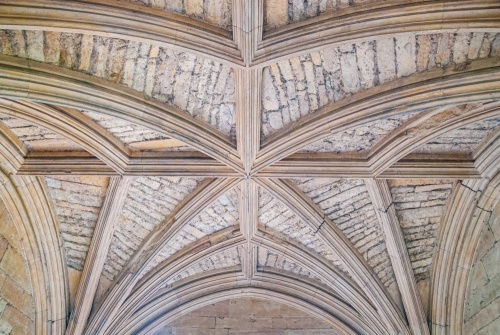 Vaulting of the gatehouse arch

The best remaining part of St Hugh's palace is the west hall, with its fine undercroft, and three service doors at the south end of the hall. Doors lead from the hall to a buttery, pantry, and kitchen passage. The tiled backs of five large fireplaces remain. Hugh's hall was completed in the 1230s and stretched to 105 feet in length.

Though the hall itself, like the palace as a whole, reflected the great power and influence of the Bishops of Lincoln, St Hugh himself adhered to a simple vegetarian lifestyle, more suited to an ascetic monk than one of the most powerful men in medieval England.

As might be expected, the Bishops of Lincoln entertained the most powerful nobles in the realm, and at least two monarchs, Henry VIII and James I, are known to have been guests at the Bishops Palace. 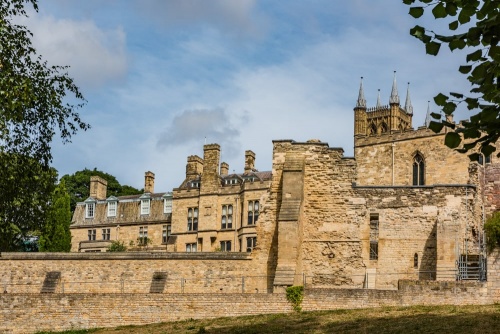 The Bishop's Palace from Temple Gardens

The palace is built on a steep slope, which means that the architects had to be quite inventive to maximize efficient layout and siting of the buildings required for such a grand palace. A small terrace on the lower level of the palace grounds has been set aside for the Lincoln Contemporary Heritage Garden, where Roman city walls, trees and pathways have been laid out based on the arrangement of medieval vaulting arches in the cathedral.

A small vineyard terrace has been planted with vines from Lincoln's twinned town, Neustadt An Der Weinstrasse in Germany.

Note that this building is properly referred to as the Medieval Bishop's Palace to distinguish it from the more modern residence of the Bishop of Lincoln. 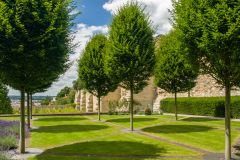 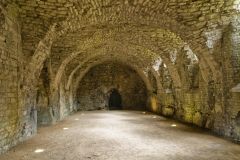