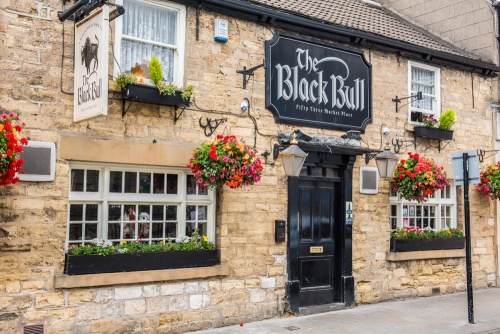 Wetherby is a picturesque town on the River Wharfe, with a market charter dating back to 1240 when Henry III granted the Knights Templar a charter for a weekly market. The market is still held today, every Thursday, centred on the Town Hall.

You can explore the historic town centre by following The Blue Plaque Trail, linking 20 locations of historical interest around the town. As the name suggests, each site is marked by a circular blue plaque giving historical details.

The story of Wetherby goes back to the Bronze Age when this area near the River Wharfe was first settled. The Romans were active in the area and there was a large Roman villa just south of the present town. 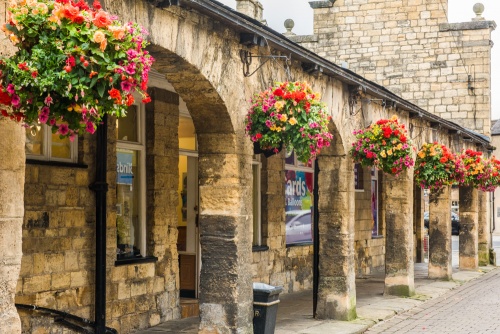 It was really in the medieval period that Wetherby rose to prominence. The catalyst was a bridge built from 1233-1235 by Archbishop Walter de Grey of York.

Archbishop de Grey gave indulgences (a certificate granting remission from sins) to those who gave money to build the bridge. The 1281 patent rolls (court records) of Edward III shows that a right of pontage was granted to the townsfolk (the right to demand a toll).

The bridge we see today is essentially the same one, though rebuilt and widened twice. The best view of the bridge is from the Riverside Walk, which goes directly beneath it.

Built onto the bridge is a memorial to the 71 men of Wetherby who died in WWI. The memorial takes the form of a winged Victory holding aloft a laurel wreath, standing on a stone plinth. The memorial was designed by the sculptor Louis Frederick Roslyn, who served with the Royal Flying Corps during the war.

A short walk along the riverside from the historic bridge brings you to The Weir, where the rushing water was used to power a sawmill, wood yard, and corn mill until 1935. There was a corn mill at Wetherby as early as 1221. 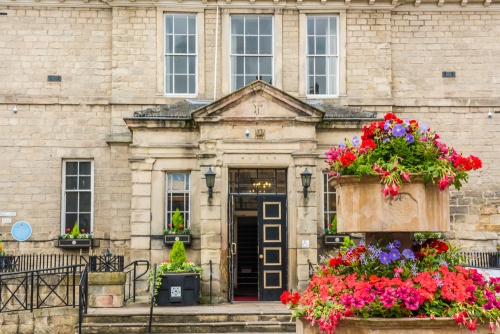 During The Anarchy - the civil war between supporters of King Stephen and Queen Maud in the mid 12th century - the Percy family built a castle on a rise of ground overlooking the ford that preceded the bridge.

Unfortunately, they did not get royal permission, so when Henry II took the throne after King Stephen's death he ordered the castle to be pulled down. Now only the foundations remain, though these are in the grounds of a private house and are not accessible to the public. 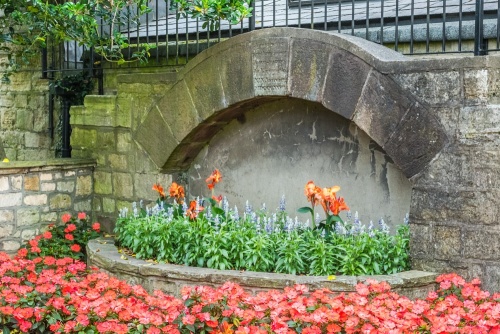 Prosperity really came to Wetherby in the 18th and 19th centuries when the town became a coaching stop on the Great North Road route between London and Edinburgh. It was a happy accident that Wetherby was almost exactly halfway between the two cities and thus made a perfect stopping point for coach travellers.

The Great North Road ran directly through the centre of Wetherby and a large number of coaching inns with stables sprang up to cater to the traffic. The 'Swan and Talbot' and the 'Angel' were the two major hotels, and each had stables for over 100 horses. In 1961 the A1(M) rerouted traffic around Wetherby, so now the town centre is a little less hectic. 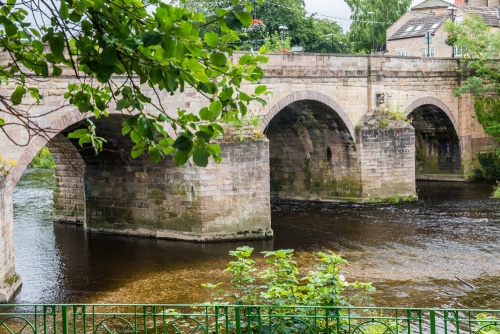 Historically, Wetherby was part of the parish of Spofforth, and it was not until 1869 that it became a parish in its own right. What is now the parish church of Wetherby was built in 1839 and extended in 1877. The original design was by the architects JB and W Atkinson.

Church highlights include very good late Victorian stained glass and a painted royal coat of arms to King George III, dated 1776. On the wall is a moving memorial to 2nd Lieutenant James Hargreaves of the Royal Field Artillery, who died in action at Passchendaele in 1917. 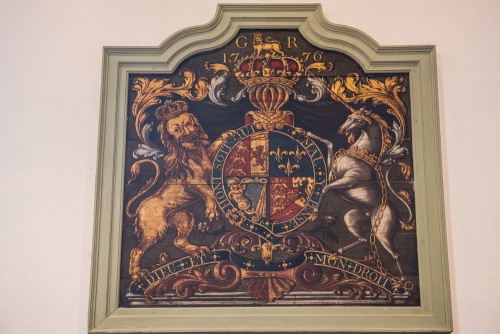 Not as well-known as The Shambles in York, this historic colonnade was built in 1811 by the Cavendish family, the Dukes of Devonshire. The arcades sheltered butcher shops rented out at 3 guineas per year while behind were slaughterhouses.

In 1888 The Shambles was converted into an open market specialising in poultry and dairy products. During the First World War, The Shambles were used for miniature rifle practice.

The colonnade now shelters a variety of shops. The northern facade facing onto the Market Place was added in 1911 as attested to by a commemorative plaque reading:

A short stroll from The Shambles is the elegant Town Hall, begun in 1845. The cost of Â£1300 was raised entirely by public subscription. The Town Hall stands on the site of a chapel of ease, erected in the days before Wetherby had its own parish. The ground floor of the Town Hall building was used as the Church School until 1895 while the Magistrates Court operated from the upper floor until 1962.

On High Street (the Great North Road) is the Garden of Rest. At the northern end of the garden is The Huguenot Archway, which originally formed an arch over a passageway between two buildings in Westgate. The buildings were traditionally said to have been built by Huguenot refugees from France. The archway bears an inscription in French which translates as 'Love your neighbour as yourself, said the Evangelist'.

A blue plaque on a stone wall on North Street marks the site of Wetherby Manor. From 1602-1824 when they sold the manor, the Cavendish family, Dukes of Devonshire, had a court leet here. The court leet administered local affairs, appointed constables, a bell man, market inspectors, and a pinder (a man who rounded up stray animals). The Cavendish's courthouse stood in the gardens behind the stone wall.

On the corner of Market Place and Castle Gate stands Wetherby Hall, a Georgian building that housed the doctor's surgery from 1890-1971. 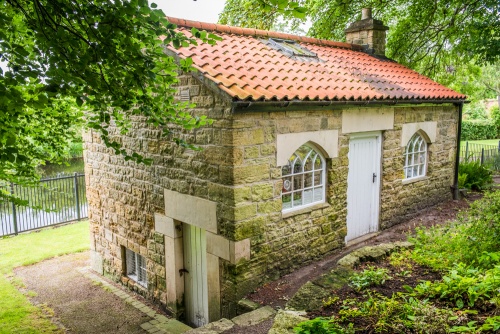 In Jubilee Gardens stands Wetherby's most interesting historic building, a Georgian Bath House. In the 18th century bathing for the sake of cleanliness was a foreign concept. However, it was becoming increasingly popular to take a cold plunge to help with a variety of medical complaints from headaches to impotence. Cold plunge bath houses became fashionable and many of the great country house estates had a specially built cold plunge.

The Georgian Bath House stands two-storeys high and is built overlooking the River Wharfe. The pool is on the lower level and is surrounded by a walkway with several alcoves used for changing clothes and taking a break from the cold water. The pool is 1.5m deep (about 4 feet) and is fed by water from a spring on the hillside above.

The idea was to take a dip in icy cold waters, then walk around the bath. This routine could be followed as many times as you could stand it.

After bathers had had enough of the cold water they could retreat to the upper chamber where a warm fire and refreshment awaited. The upper chamber was known as the Warming Room, and it was popular for socialising, playing cards, and gambling. The secluded location also made bath houses like this a popular place for romantic liaisons.

The Bath House is usually kept locked but you can easily peer into it from large windows on two sides. 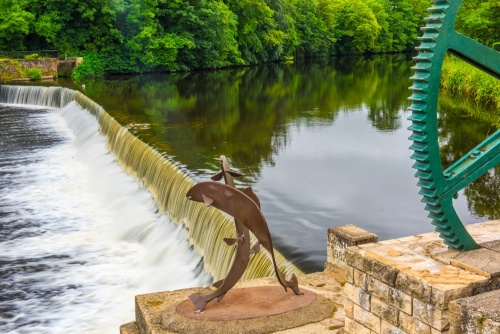 The Weir on the River Wharfe

Wetherby is on the A1(M) just north of Boston Spa. There are several large car parks around the town centre, notably at the Horsefair Shopping Centre on North Street. When we visited car parking was free. 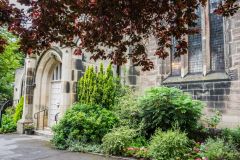 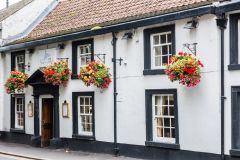 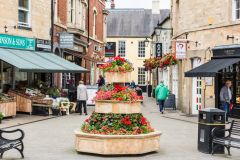 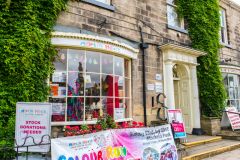 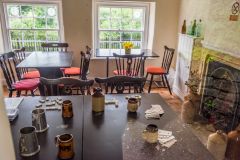 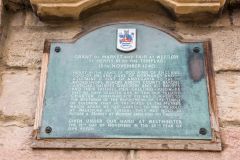 More self catering near Wetherby

More bed and breakfasts near Wetherby

Self Catering near Wetherby