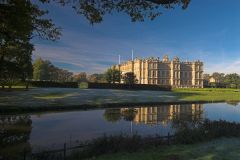 Following on from my earlier article covering the 25 Best British Castles, here's a list of the 25 Best Stately Homes in Britain. Again, these are stately homes that I personally have visited and can recommend from experience, so there may well be some quite wonderful country houses not on this list.

Some of these houses have roots as medieval castles, while some were built from scratch during the height of the country house boom during the 18th century. Some that might well qualify, like Warwick Castle and Alnwick Castle, are already on my castles list, so I've left them out here.

This isn't meant to be a list of the most opulent houses, or the largest, though, naturally, quite a few of these stately homes are indeed large and certainly opulent. Mostly, these are the places that we enjoyed visiting the most; places that combine historical interest with a wonderful visitor experience.

And there you have it, my top 25 stately homes to visit in the UK. I've had to leave off more than a few of my favourites, just to pare this list down to 25, but you won't go wrong with any of the houses on this list.

Resources:
Many of the stately homes on this list belong to one of these two organizations. Membership gives free entry.
National Trust
Historic Houses Association