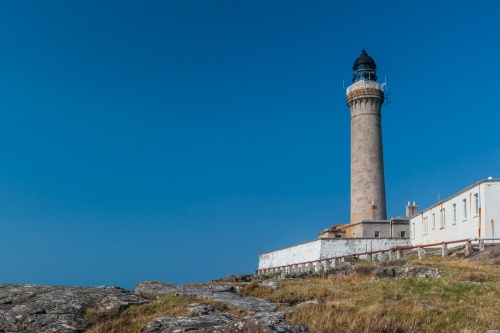 The Ardnamurchan Point Lighthouse stands at the westernmost point on mainland Britain. The lighthouse was designed by the famous Stevenson family of engineers and went into operation in 1849. Visitors can climb the 152 steps inside the tower and explore an exhibition centre housed in a former keeper's cottage.

The rocky coast of the West Highlands creates a constant challenge for shipping. In 1845 the Northern Lighthouse Board tried to alleviate some of the danger to ships passing Ardnamurchan Point by calling upon the famous Stevenson family of engineers to design a lighthouse.

Twenty acres of land was purchased from the local laird, Mr Alexander Cameron, who received 20 pounds for the land itself and 58 pounds for any inconvenience caused by the building works.

The new lighthouse was designed by Alan Stevenson, uncle of novelist Robert Louis Stevenson. The new tower is an unusual style that can best be described as Egyptian, and is unlike any other Stevenson lighthouses in Scotland. The Egyptian style can easily be seen in the tower entrance, the corbelled top of the tower, and the chimneys of the keeper's cottages. 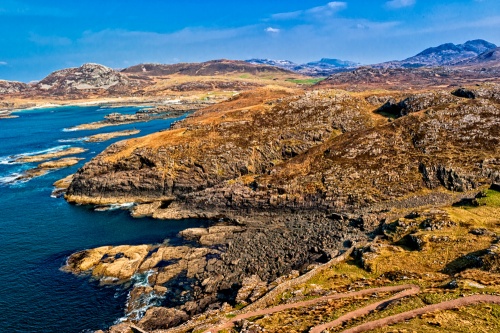 The tower stands 36 metres high and the top is 55 metres above the rocks. The material is granite, brought from the Ross of Mull and it stands on a bed of volcanic rock called gabro, or gabbro.

Work was actually carried out by a contractor named Hume, and it took 3 years to build the lighthouse. Things might have progressed more quickly, but an outbreak of scurvy caused a delay, and a doctor had to be brought out to treat the workmen. The lighthouse came into use on 5 October 1849.

The most famous event in the long history of the Ardnamurchan Lighthouse came in 1852 when a severe storm descended on the area. The tower was struck by lightning, and heavy seas washed away 40 feet of the road.

The lighthouse is still functional, though the light is now operated automatically from the Northern Lighthouse Board's offices in Edinburgh. The lights reach 24 nautical miles out to sea.

From the establishment of the lighthouse until it was automated in 1988 a Keeper and Assistant lived here full-time, with their families. The keepers were paid a total of £18 per year to tend the light, which involved keeping a watch all night to ensure that the light flashed correctly.

The families were as self-sufficient as possible, keeping sheep and cows at the lighthouse, and growing whatever crops they could. It was a lonely, isolated existence, and a hard life. One of the former keeper's cottages has been converted into a holiday cottage, so if you fancy staying in the incredibly scenic surroundings of Ardnamurchan Point, you're in luck! 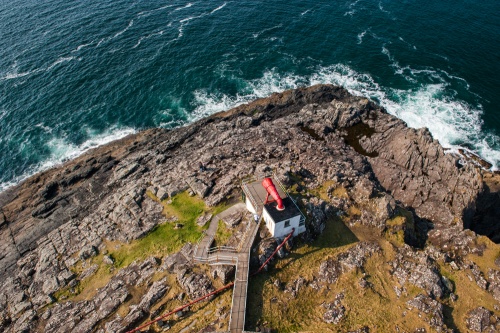 Looking down on the foghorn

The head keeper's house has been converted into a modern exhibition centre. Here you can find out about the history of the lighthouse and how it was operated, as well as information on the natural history of the Ardnamurchan and the heritage of the people who live here. There is a fee to explore the exhibition, even if you don't want to tour the lighthouse itself. Highlights of the exhibition include the original Fresnel lens installed in 1849, made of polished crystal glass sections.

There is a small visitor centre at the end of the minor road leading to the lighthouse. There are 2 car parks, one suitable for larger vehicles like camper vans, the other, lower car park for normal automobiles. There is a coffee shop and toilet facilities. If you don't feel up to climbing the lighthouse stairs you can still access to viewing platform where you will find the huge foghorn. You can often spot dolphins and whales from the viewing area.

The lighthouse is usually open daily from April through September but please do check the official website to make sure. There are regular guided tours throughout the day, usually on the half-hour. At the height of the summer season these tours can be quite busy so pre-booking might be a good idea.

There are 152 steps inside the lighthouse tower, but the reward for your exertion is a fabulous view over the surrounding coastline.

Ardnamurchan Point is a truly stunning area; the coast is a rocky landscape of reefs and mountainous terrain. The lighthouse itself is a magnificent example of Victorian engineering, set in a magnificent cliff-top landscape. 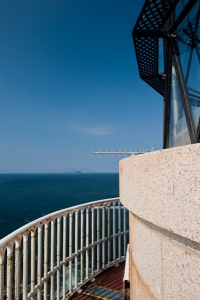 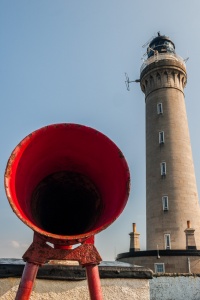 Looking down the throat
of the foghorn 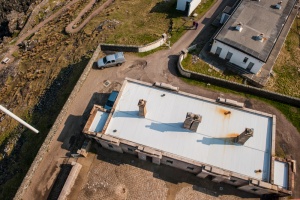 Looking down from the tower 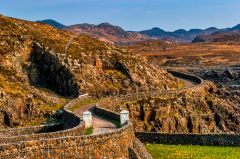 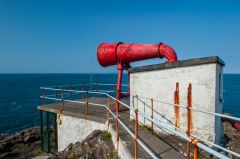 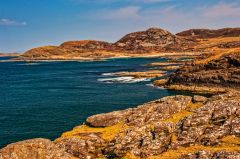 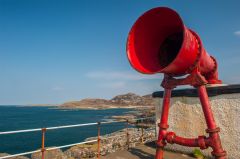 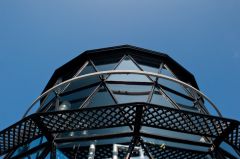 Nearby accommodation is calculated 'as the crow flies' from Ardnamurchan Point Lighthouse. 'Nearest' may involve a long drive up and down glens or, if you are near the coast, may include a ferry ride! Please check the property map to make sure the location is right for you.