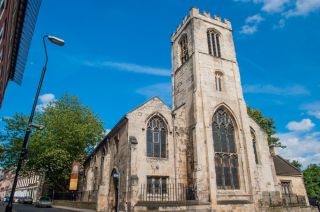 Grab a trowel and get your hands dirty by taking part in the excavation of artefacts from two millennia of York history, from Roman times through the Victorian era.

Visitors can actually get their hands dirty and dig in four replica excavation pits, each one representing a location and time period from York's long history. The excavation pits allow visitors to find artefacts modelled on those uncovered in the Roman city of Eboracum, Viking finds at Coppergate, medieval artefacts from Fishergate, and Victorian objects from a terrace of houses at Hungate.

The focus at DIG is on giving children an opportunity to get interested in archaeology, hopefully inspiring a whole new generation of archaeologists, and offering a chance for families to explore the rich history of York.

DIG is housed in historic St Saviour's church, not far from The Shambles and the heart of historic York. There has been a church on this site since at least the 11th century, but the current building is largely 15th century - though fragments of earlier stonework still survive. Once a fashionable and bustling area of York, the medieval church was extended in 1845 to accommodate a growing population.

However, within a few decades the area of St Saviourgate began to decline, and slums grew on the church's doorstep. In 1954 St Saviour's was declared redundant. The building was stripped of its furnishings and medieval stained glass.

Who knows what might have befallen the historic building if the York Archaeological Trust had not stepped in. The Trust acquired the building in 1975 and used it to store archaeological finds from across the city. Now the historic venue has been transformed, to allow visitors to learn - and to enjoy a hands-on experience as they explore the unique history and archaeology of York.

You can purchase combined tickets that also offer entry to other Trust locations, including the popular Jorvik Viking Centre, Barley Hall, and Micklegate Bar Museum. DIG is a popular venue for schools and educational groups and has an ongoing programme of special events. 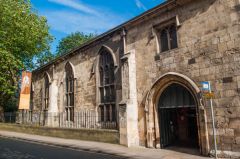 More self catering near Jorvik DIG >>