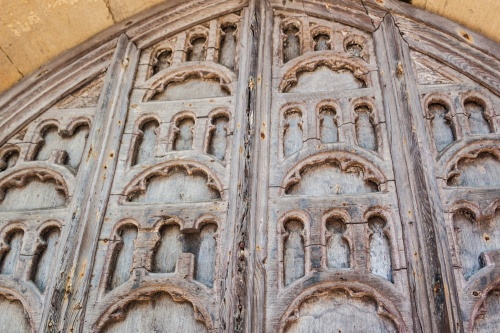 St Sampson's is a redundant church in the historic centre of York, a short stroll from both York Minster and The Shambles. The church we see today is a Victorian rebuilding of an earlier medieval church. It now serves as a popular social centre for the over 60s.

The history of St Sampson's is a mix of legend and conjecture. The church is said to be dedicated to Sampson (or Samson), a 5th-century Archbishop of York. Sampson was appointed to his post by Ambrosius Aurelianus, the uncle of King Arthur, sometime around AD 480.

Unfortunately, none of the tradition is backed up by historical fact. The earliest known Archbishop of York was Paulinus, who served from AD 625-633. The very existence of Ambrosius Aurelianus is dubious, to say the least. 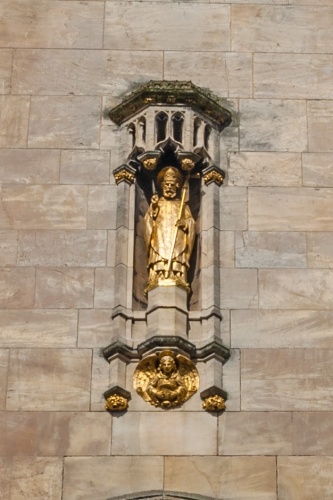 A gilded statue of St Sampson

Some online sources repeat the story that this is the only church in Britain dedicated to st Sampson. In truth there are [at least] three others; one in Cricklade, Wiltshire, one near Callington, Cornwall, and one in Guernsey.

What we do know for certain is that there was a church here in the early 11t century, since a fragment of a cross-shaft from that period has been found incorporated into the wall of a house within the former churchyard. excavations by the York Archaeological Trust unearthed a Norman stone wall under the south arcade, and the church is built over a section of the Roman city wall.

The living of St Sampson's was held by Pontefract Priory in the 12th century, but by 1226 it had passed to the Archdeacon of Richmond. The Prior of Pontefract and the Archdeacon disputed the right to the advowson, and it passed to the Archbishop of York in 1332 and then to the Crown. In 1394 Richard II transferred the advowson to the Vicars Choral of York Minster, who held it for 542 years until 1936. 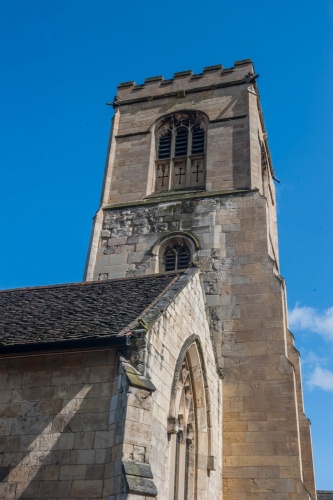 St Sampson's suffered massive damage during the Civil War siege of York in 1644. The church's location close to the city walls made it a target for Parliamentary cannons, and as a result, the tower was badly damaged and had to be rebuilt. It was largely neglected after the Civil War, then suffered a fire in 1844 that left it nearly derelict.

The medieval building was pulled down in 1846 and rebuilt over the next two years by the architect Frederick Bell, at a cost of £2,000. Bell managed to retain some medieval features including the arcades and the church door.

The body of the church dates to the 14th and 15th centuries, but the entire building was heavily rebuilt in the late 19th century. It was declared redundant in 1968, but reopened as The St Sampson's Centre in 1974, in a ceremony presided over by the Queen Mother. 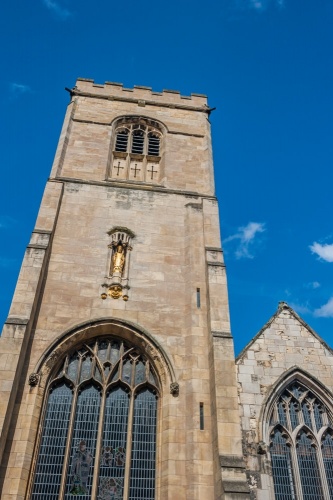 Another view of the church tower

Today the Centre offers a place for the over-60s to relax and socialise, with an ongoing programme of events including dances, piano recitals and jumble sales. There is a very popular cafe that keeps the historic building buzzing with activity.

The best remaining historical feature is the 15th-century wooden door, carved with tiers of tracery in the form of single arches and three-light openings.

The medieval arcade remains, and the nave roof is beautifully painted with gilded bosses.

St Sampson's is on Church Street, just a few minutes stroll from York Minster and the Shambles in the heart of York.