HERITAGE HIGHLIGHTS:   16th-century building at No. 11 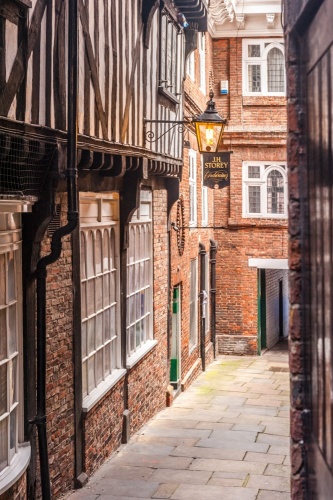 Lady Peckett's Yard is a medieval alley, or snickleway, linking Pavement and Fossgate in the heart of historic York. The atmospheric alley is reminiscent of Diagon Alley in the Harry Potter films - without the wizards. It is formed from two medieval passages meeting at right angles, Bacus Gail and Trichour Gail, meaning Bakehouse Lane and Cheat's Lane respectively.

The origin of Bakehouse Lane seems obvious. Cheat's Lane is intriguing, however, possibly coming from the Middle English term escheat, when a parcel of land reverted to the Crown if the owner died without an heir. Another fascinating possibility is that trichour comes from the Old English for treachery - the same root as 'traitor'. 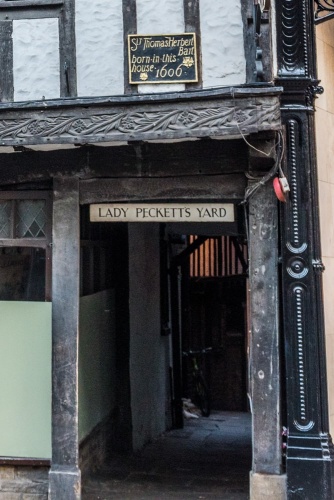 The entrance on Pavement

Lady Peckett's Yard takes its name from Alice Peckett, the wife of John Peckett, Lord Mayor of York in 1701. After John Peckett's death his widow lived in a house on this site. The present name was in common use by 1782, but it referred to the open space where the lanes led, not for the alley itself.

The passage is lined with attractive historic buildings. at the bottom is No. 11, a 16th-century three-storey house that was originally timber-framed with jetties on two sides (the jetties have since been underbuilt). The north facade was refaced with brick in the late 17th century by John Peckett. The building is owned by the York Civic Trust, who acquired it in 1946.

It is traditionally thought that John Wesley stayed in Lady Peckett's Yard during a visit to York and in the Victorian period there was a Wesleyan Methodist association Chapel here. 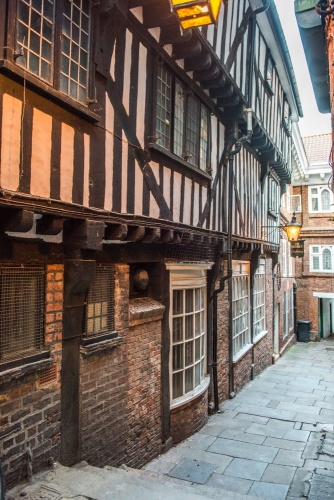 The north side of the alleyway

The Pavement entrance to Lady Peckett's Yard is a doorway attached to Sir Thomas Herbert House, a beautiful 'black and white' timber-framed house that must be one of the most frequently photographed buildings in York. It takes its name from Sir Thomas Herbert, born here in 1606.

Herbert was an aid to the Earl of Pembroke on his mission to the Shah of Persia from 1626-1629 and wrote an account of his ravels in 1634. The Shah of Persia gave Herbert a Persian costume and a black pageboy. Herbert supported Parliament in the Civil War but switched sides in 1647 and was a personal attendant to Charles I in his last years of captivity. He is buried in St Crux churchyard.

Next to Herbert's birthplace is the Golden Fleece pub, said to be the most haunted of York's historic hostelries. 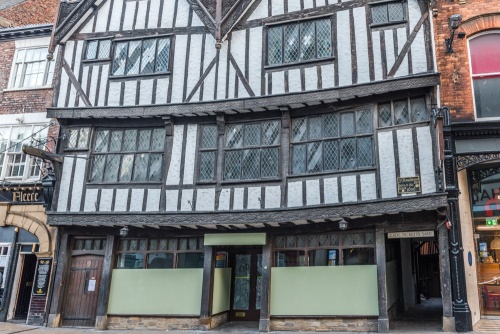 The most picturesque entrance to Lady Peckett's Yard is of Pavement, a stone's throw north-east of All Saints pavement church. Look for the low doorway on the right of the Sir Thomas Herbert House. The passage is signposted over the alley entrance.