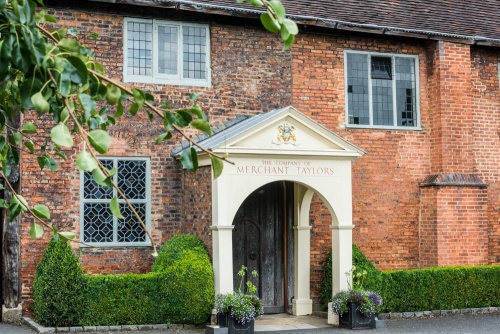 At first glance, the Hall appears to be no older than the 18th century at the earliest but looks can be deceiving; the red-brick exterior is merely a facade encasing a medieval timber-framed structure that stands as one of the architectural treasures of York. 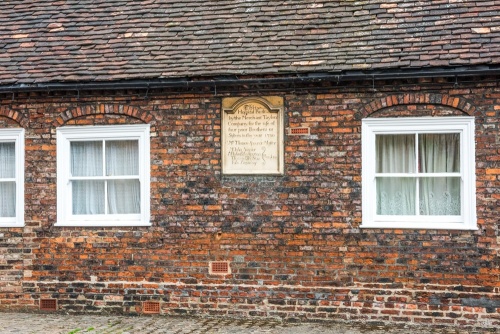 In 1415 the Company of Merchant Taylors built a guildhall on Aldwark. The new building consisted of a large hall, dubbed the Great Hall. Here the guild held meetings, socialised, and conducted business.

In the late 15th century a wing was added at right angles to the Great Hall with a smaller chamber known initially as the 'Counsell howse' (Council House). This was later known as the Counting House, though it may have been used as a chapel. It is now known as the Small Hall.

The Great Hall has an ambitious timber-framed roof with a king post system for stability. The chamber is roughly the same height and width, and the length is double both those measurements, making it a double cube.

One one side is the entrance hall, formed from a medieval screens passage. Over the fireplace is a painted coat of arms for the London Drapers Company, made sometime before 1688. The Merchant Taylors used the Drapers Company coat of arms until they were granted their own. The stained glass window was installed in 2015 to mark the 600th anniversary of the Hall. 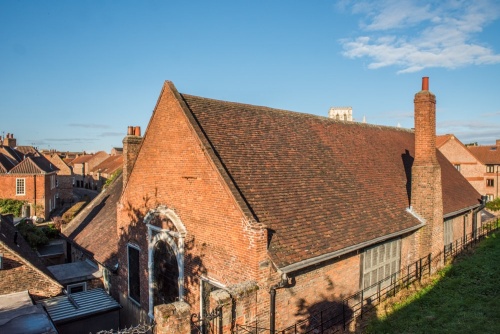 The Hall from the medieval city walls

Two stained glass windows in the Small Hall were made by the York artist Henry Gyles. The oldest dates to 1662 and is Gyles' earliest known work. It was the gift of Simon Buckton, a wealthy merchant tailor.

The second window is a mystery; it depicts a bust of Queen Anne and the coat of arms of the London Company of Merchant Taylors above an inscription commemorating the restoration of the London Hall following the Great Fire of 1666. But what is the window of a London guild commemorating a London event doing in York?

The Merchant Tailors' Hall is primarily a function venue for public and private events such as weddings and corporate meetings, so it is not usually open to the public. However, you can usually walk through the gates and get a close look at the Hall and the neighbouring almshouses from inside the grounds, and you can look down on the Hall from the York city wall walk which passes immediately behind the property.

The Merchant Tailors' Hall is on Aldwark and is well signposted for pedestrians. Just look for the ornate iron gateway and the information panel. And, of course, you can see down into the property from the wall walk.

Please be aware that vehicular access is only possible via Monk Bar/ Goodramgate/ Aldwark, but traffic control barriers prevent access via Aldwark and St Andrewgate.