A vessel used for baptism ceremonies. Fonts hold consecrated water used in the baptism of newcomers to the Christian church (usually infants). Fonts are usually located at the west end of the church, often near the south door. Fonts are usually of stone, and often lined with lead.

Fonts make for fascinating study, as they come in so many shapes and sizes, with decoration ranging from non-existent to elaborate. Late Saxon and early Norman fonts are often built in a simple tub shape, while other variations have the bowl supported on four corner pillars, or a single central column. During the later medieval period it was more common to see polygonal font bowls on a central column. The bowl faces could be elaborately carved with religious symbols, figures of saints, Green Man variants, heraldic shields, and other designs.

One notable regional font style is the Seven Sacrament font of East Anglia. These feature eight faces on the bowl, seven faces carved with a representation of the sacraments (Baptism, Confession, Confirmation, Holy Eucharist, Holy Matrimony, Holy Orders, and Anointing of the Sick).

As the medieval period advanced it became common for fonts to be covered by increasingly elaborate covers, usually of wood. These covers might be richly carved and painted, and rise to an extraordinary height, as at Ufford in Suffolk. 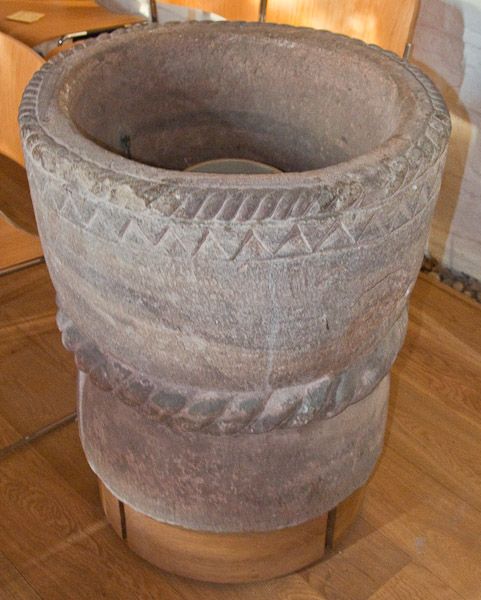 John I crowned at Westminster Abbey

John had already been anointed Duke of Normandy after the death of his brother, Richard I