The architectural meaning of capital is a wide crown to a column or pilaster, designed to create a base offering structural support to an arch. Capitals were often embellished with highly decorative carvings, and the style of carving can be of great use in identifying the time period when the column was erected.

Capitals have several distinct sections. At the top is a broad, flat section called an abacus. This can be unadorned, curved, or moulded. Below the abacus is a more slender section called the necking, tapering down to the shaft in a form loosely resembling an uptured bell. The necking is often joined to the column shaft by a narrow moulding.

Early Norman capitals are often unadorned, with square or round abacus. These simple designs evolved with the addition of mouldings above and below. The most common Norman style is the cushon or block capital, consisting of a cube of stone tapering in a rounded fashion to the column below. The flat surfaces on each side were later sculpted to a scalloped shape. Late Romanesque capitals were sometimes elaborately carved with foliage or animal designs (see Kilpeck Church in Herefordshire).

Early English capitals are often foliated or mouldied, with rounded or moulded abacus. Foliated designs were common, and could be enormously complex and detailed, as at Lincoln Cathedral or Southwell Minster. So common are foliated capital designs in the Gothic period that specific subtypes evolved, among them the crocket capital, with tiny leaves forming classical volutes, the stiff-leaf capital, a more advanced form of crocket capital, and the water-leaf capital, with broad, carved leafs curving at abacus level. By the 14th century foliated capitals were augmented with naturalistic carvings of fruit and flowers amid the leaves. The last flowering of Gothic in the Perpendicular period saw plain, moulded capitals, often octagonal in section, atop circular columns. 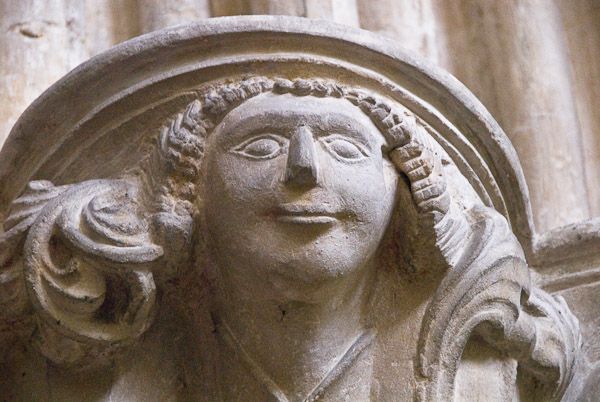 His half-brother was Aethelred the Unready