There is so much to see within York Minster that sometimes the guidebooks give short shrift to the exterior of the building. Good views of the superb Great East Window can be had from College Street, named for St William's College, a wonderful medieval building which houses some of the Minster's own administrative offices, as well as dining and meeting facilities.

Standing outside the college, the east window towers above you. Dating to the early 15th century, it contains the largest area of stained glass of any window in the world; over 1,700 square feet. The east window is the work of John Thornton, a glass-maker from Coventry. 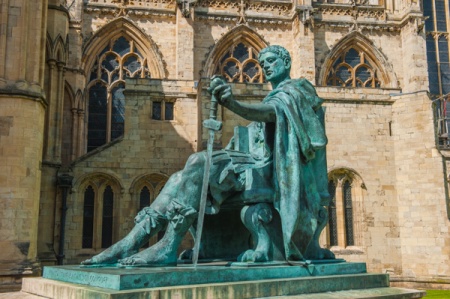 From College Street, you can walk around the southeast corner of the Minster to the main visitor's entrance. This approach provides excellent views of the tower, especially at night, when the tower is illuminated from below by floodlights (see photo below). Before you reach the south porch, you pass a large statue of Emperor Constantine the Great. Constantine I visited York in 306 AD - and promptly died.

His son, Constantine the Great, founder of Constantinople and the first Christian Emperor of Rome, was proclaimed emperor in York. The traditional site of his crowning is preserved under the Minster.

Continue on past the south entry to the glorious west front. Walk across the large paved area to get a good view of the front. Better yet, come at night, when the floodlights illuminate the west front beautifully. 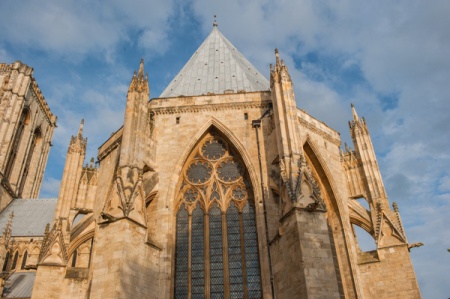 Unfortunately, access to the exterior of the north side of the Minster is not allowed to the general public, though you can get some nice views from the old city walls. Some of the best views of the towers of York Minster are to be had from the wall south of the River Ouse.

Join the wall walk beyond Lendal Bridge and proceed south for several hundred metres, then look back into the oldest section of York. The Minster can be clearly viewed amid the cluster of smaller buildings and streets that surround it (see the first photo below).

You can also view the walls from the tower - visitors to the Minster may climb to the top of the tower, from whence wonderful views of the city can be obtained. The climb also affords intriguing views of the flying buttresses used to transmit the weight of the building to the ground. A small fee is charged for climbing the Tower. 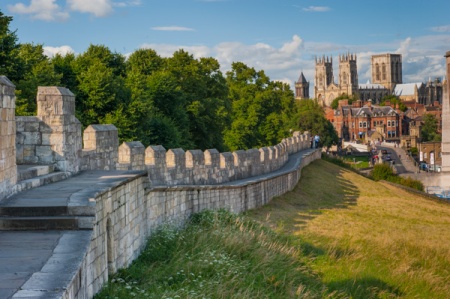