The delicate Chapter House, where the day to day business of the Minster was run, was begun in about 1260. It is a superb example of the Gothic Decorated style which was then in vogue.

The entrance to the Chapter House is along a fairly low passage, which gives no hint of what is to come. You pass through a twin arched door, where a wonderfully carved Madonna and child stand, and enter into a circular space ringed with low stalls, above which soar traceried stained glass windows that can rival the famous 5 Sisters for delicacy and lightness.

The windows lead your eye upwards, where far above your head the marvelous ribbed vault of the ceiling is enough to make even the most footsore of tourists gasp. 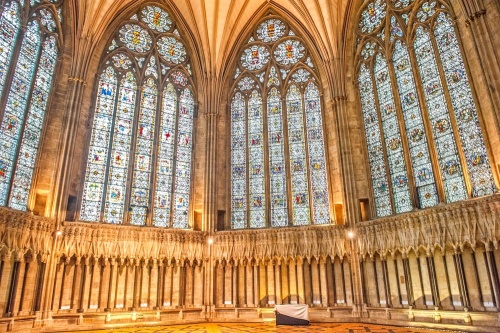 The ribbed wooden roof is truly a masterpiece of medieval architecture, with colourfully painted panels and a profusion of gilded bosses (see photos below). Unlike other chapter houses, such as that of Wells Cathedral, there is no central column to support the roof vaulting; the ceiling is "free-standing" if you will, seeming almost to hang in space.

The stalls which line the chapter house are topped with a wonderful profusion of gargoyles - some humorous, some depicting souls in torment. 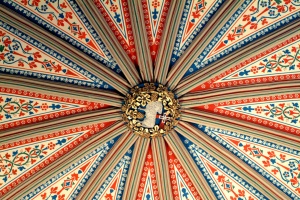 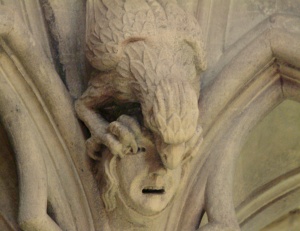 Gargoyle - man being eaten by a beast 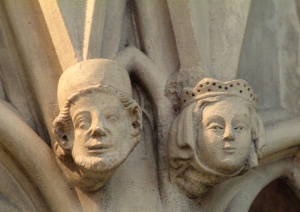