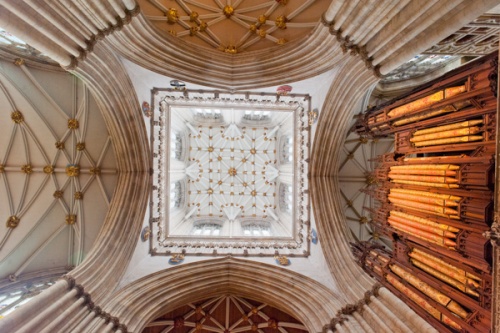 The nave of York Minster is the widest in Europe, and one of the highest, and this impression of height is enhanced by the large expanse of stained glass which allows light into the interior of the structure. The nave was built from 1220, replacing an older structure, and is primarily Early English.

Entering by the south door, look back to see the large rose window above the entrance. The stonework dates from 1220, but the glass itself is from the late 15th century.

Before you is the Quire, fronted by an elaborate screen. We'll return to the Quire later, but for now turn right and pass down the south aisle towards the east end of the Minster. The aisle is lined with monuments to nobles and churchmen of old.

Outside the south door of the Quire is an exceptionally large 13th-century cope chest with wonderful strapwork on the exterior. The wedge shape of the chest gives a clue to its use. It was used to store "copes" or ceremonial vestments which were circular in shape and formed a wedge shape when folded for storage.

Across the aisle take in the memorial to Archbishop Lamplugh (1615-1691), designed by Grinling Gibbons. This is just one of the numerous superb tombs you'll see; most are post-medieval, but many dating from the late Tudor period are worth noting for the painted effigies of family members. A few examples can be seen in the photos below.

The East end is dominated by the Great East Window. Though somewhat dwarfed by comparison, the east end also features 3 chapels; the Lady Chapel, used for small services, St. Stephen's Chapel, and All Saints Chapel, the official chapel of the Duke of Wellington's Regiment.

More tombs and memorials await in the north aisle. Don't miss the delightful carved cherub on the tomb of Archbishop Sterne (d. 1683). As you approach the north transept you'll find the highly decorated 14th-century tomb of Prince William of Hatfield, son of Edward III and Philippa of Hainault. The unfortunate prince died at 10 years old and is buried beneath this canopied tomb.

Move past the tomb into the north transept, which is dominated by the quintuple lancet windows known as The 5 Sisters. These windows, completed in 1250, contain over 100,000 individual pieces of glass. They reach a height of 16.2 metres, and each window is 1.5 metres wide.

A mechanical clock on the east side of the transept features two figures of knights who strike the quarter hours by striking each other!

A short passage from the transept leads to the Chapter House.

Returning to the nave, continue towards the west end. The large west window dates from 1339 and is built in the then-popular Curvilinear style.