HERITAGE HIGHLIGHTS:   One of William the Conqueror's earliest castles 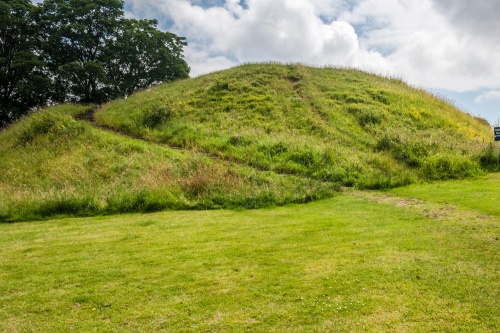 In 1068 William the Conqueror, fresh from his conquest of northern England, needed a stronghold to consolidate his rule over East Anglia. He chose the only high ground near a crossing of the River Cam, and there built a motte and bailey castle, a fortification centred on a palisade atop a mound, or motte, surrounded by a large enclosure, or bailey.

Cambridge Castle was rebuilt in stone under Edward I, with curtain walls, a gatehouse, and a stone keep atop the motte. The castle was allowed to fall into disrepair in the late medieval period, then briefly refortified during the Civil War.

The fortifications were pulled down in 1647, and the gatehouse was removed in 1842. Most of the stone was used to build or repair college buildings, and today only the motte remains of what was one of the earliest Norman castles in England.

The site later occupied by Cambridge Castle was in use at least as early as the Bronze Age. It is the only hill of any size in the area and would have afforded a good view over the river crossing and the surrounding area.

The Romans established a fort here in the wake of Boudicca's rebellion in AD 60, as part of their attempt to control the unruly Anglian tribes. The fort was rebuilt in the 70s but later abandoned by the military, and the site became a town known as Duroliponte, the forerunner of Cambridge.

We know that the site was in use during the Saxon period, as archaeologists have unearthed an execution cemetery, with skeletons showing signs of beheading and hanging.

It is not surprising that William the Conqueror chose this hill to build his castle; it guards a river crossing that was the most northerly point at which an army could cross the River Cam on their way between the Midlands and East Anglia. In William's day, the river crossing was by way of a wooden bridge known locally as Great Bridge, on the site now occupied by Magdalene Bridge. It is this bridge that gave Cambridge its name.

I've seen it written elsewhere that William the Conqueror built Cambridge Castle as part of his efforts to subdue Hereward the Wake's rebellion against Norman rule. This seems unlikely, as Hereward's rebellion began in earnest two years after the castle was built, in 1070.

William's castle acted as an administrative centre, with monthly courts, a sheriff's office, and a prison dungeon. 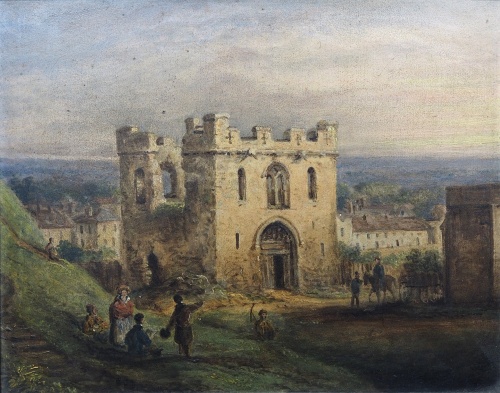 During the Anarchy, the struggle for power between King Stephen and Queen Matilda, Cambridge Castle was held for Stephen. Geoffrey de Mandeville, Matilda's ally, attacked the castle in 1143.

In 1216 the timber defences of Cambridge Castle proved inadequate to withstand an attack by Prince Louis of France. When Prince Louis was defeated in the following year, the castle reverted to the Crown.

The castle withstood an attack by rebellious nobles during the Second Barons War. Edward I finally rebuilt the Norman timber fortifications in stone in 1289 and stayed at the castle in 1293/4. Edward replaced the bailey with a strong curtain wall with circular towers at the corners.

The Castle becomes a Gaol

The ruinous castle was refortified by Parliament in the English Civil War, but Cambridge was never attacked. After the conflict, Parliament ordered the castle to be slighted; made unusable for military purposes.

Records from the early 19th century suggest that most of the people held in the gaol were debtors. The castle gaol was replaced by a new building in the castle bailey shortly after, and the medieval structure was allowed to decay. Stone was used for local building projects, so that today no evidence of the original castle remains beyond the 11th-century mote.

A set of stone steps is set into the castle mound, allowing visitors to climb to the top of the mound.

Cambridge Castle is an open site, available to visit at any time.

Cambridge Castle is very easy to find. It stands immediately east of Castle Street Car Park, to the north of Magdalene Bridge. There is a pedestrian entrance to the car park on Castle Street almost exactly opposite Whyman's Lane.

Cambridge Castle is very easy to find. It stands immediately east of Castle Street Car Park, to the north of Magdalene Bridge. There is a pedestrian entrance to the car park on Castle Street almost exactly opposite Whyman's Lane.