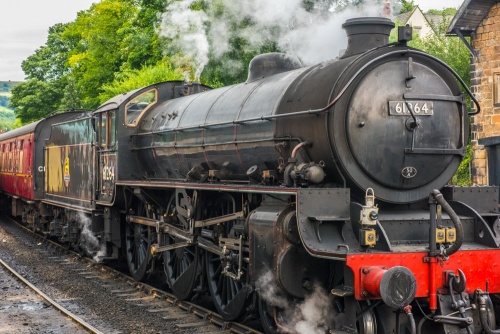 Grosmont is a quiet village in the Eskdale valley of the North York Moors National Park. It is best known today as the northern terminus of the North Yorkshire Moors Railway, one of the most popular heritage railway lines in England. Despite its spelling, the village name is pronounced 'Growmont', not 'Gross-mont'.

Grosmont was little more than an isolated hamlet, nothing more than a scattering of cottages until George Stephenson decided to build a line linking Whitby to Pickering in 1835. Stephenson routed a section of the railway line up the Esk Valley.

To traverse the terrain he needed to design a tunnel. Ironstone was found during the tunnel construction, and the discovery changed the history of the area.

The railway made ironstone mining economically feasible, and the quiet rural area was transformed almost overnight into a bustling hive of industrial activity. A settlement grew near the railway tunnel. The growing village was at first named simply 'Tunnel', as it developed at the end of the railway tunnel. It was later renamed Grosmont after the nearby 13th-century Benedictine priory of the same name. While the railway has left its indelible mark on Grosmont, there are no visible reminders of the priory. 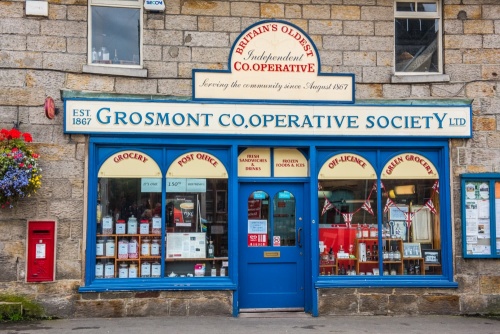 The first railway was horse-drawn and was one of the first railway lines in Britain. Thirty years later in 1865, George Hudson, the 'Railway King' built a branch line from Teesside down the Esk Valley. From that point on Grosmont became a busy railway junction.

The Pickering line closed in 1965. A group of local enthusiasts came together to prevent the line from being destroyed. They succeeded in reopening the section between Grosmont and Pickering as the North Yorkshire Moors Railway (NYMR).

The NYMR is now the most popular heritage railway in England, welcoming over 350,000 visitors annually. Many people come to Grosmont just to see the steam locomotives entering and leaving the railway station, even if they don't actually take a train trip.

The NYMR runs regular steam and diesel train services between Pickering and Grosmont, with an extra summer service from Grosmont to Whitby on the Esk Valley Railway line. The heritage line and the Whitby line share the station - each on its own platform. 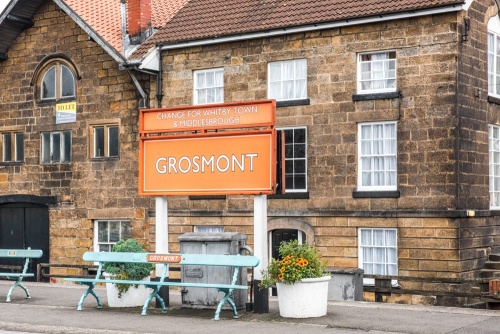 Aside from the railway station visitors are welcome to visit the Locomotive Sheds, a short walk away. The sheds house engines currently under restoration, as well as a variety of historic railway equipment.

One of the highlights of the Locomotive Sheds s a tri-cycle inspection trolley used on the Norwegian State Railway until 1982. This unit is unique in England. It was used on the line between Vickersund and Kroderen to look for track defects and fires along the line. Remarkably, the small unit is capable of speeds up to 20mph.

The 'Deviation Shed' houses locomotives owned and restored by the North Eastern Locomotive Preservation Society (NELPS). Among the engines here are Nos. 2392, 2238, 2005, 4767, 901, 69023, 5, and 31. A walkway lets you look down on engines in the process of being restored, and if you are lucky you'll get to watch steam locomotives being brought into a siding next to the shed.

The shed gets its unusual name from the fact that it was built at the junction of George Stephenson's 1836 line and George Hudson's 1866 line. Hudson's line deviated from Stephenson's original route and sections of track along the later line often included the term 'Deviation' in their names. 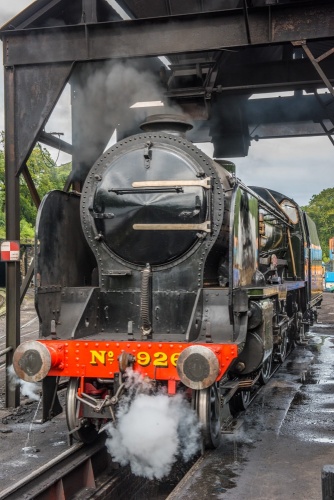 A steam locomotive at
the Locomotive Sheds

A popular walking route is the 3.5-mile trail from Grosmont to Goathland, via Beck Hole. The footpath follows the course of George Stephenson's original railway line beside the Murk Esk and links to a short diversion to Thomason Foss, a picturesque waterfall on Eller Beck.

From Beck Hole, the railway carriages had to be pulled up the steep slope by horses using ropes and counter-balanced pulleys. This was a slow and dangerous technique but it remained Grosmont's major source of connection to the outside world until the second rail line arrived in 1865. The new line allowed steam locomotives to pull trains all the way from Whitby to Pickering.

Ironstone mining began in 1836, the year after the line to Whitby opened. Iron ore was taken by rail to Whitby and from there loaded on ships sailing to Tyneside and Wearside for processing. The number of active mines around Grosmont meant that it became viable to have a local smelter. Within 25 years there were three mines, producing some 70,000 tons of iron ore annually.

From 1870 until 1957 the 'Grosmont brick' was made here. This was an exceptionally dense brick that was impossible to drill.

In 1863 an ironworks plant with two blast furnaces was opened in Grosmont. A third furnace was later added. The ironworks stood on the site of the present National Park car park. By 1880 cheaper and high-quality ore was being imported into Britain, and importance of Grosmont's mines declined rapidly. The ironworks closed in 1915.

One of the last vestiges of the iron mining that transformed Grosmont is a brick-built structure in the woods close to the car park. This structure looks like a large pair of pillars. It was part of the overheads conveyor belt system that brought ore from the mines to the smelter. 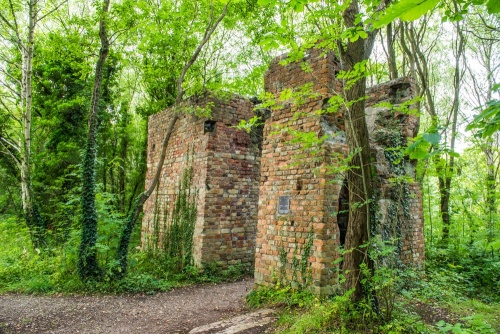 Remains of the Victorian ironworks

As ironstone mining developed, Grosmont's population boomed. The growing population needed a church, so a Whitby entrepreneur named Henry Belcher wrote two booklets to raise money, and held a fundraising bazaar. He laid on special trains to bring visitors to the bazaar. These are thought to be the first train excursions in history. Belcher succeeded in raising money for the first church, dedicated to St Matthew.

Within a few decades, however, the church was too small for Grosmont's rapidly expanding population. It was pulled down and rebuilt on a larger scale, giving us the attractive Victorian Gothic church we see today.

Though the church is a very good example of 19th-century Gothic Revival architecture, it boats an early Norman font which must be at least 700 years older than the present building. Look for the large circular west window, which acts as a memorial to Henry Belcher. 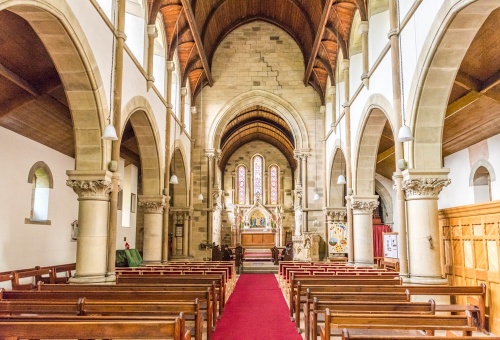 To reach the church you have to pass through George Stephenson's 1835 railway tunnel, which is now a pedestrian subway. It is the only building in Grosmont to be rated Grade II* for its historical importance.

The tunnel was designed by George Stephenson's assistant Frederick Swanwick, the aged 22. The company directors were not happy with Swanwick's design; they considered embellishments like the castellated decoration on the northern end of the tunnel to be a waste of money. What they wanted was something simple and functional, without any extra architectural features. The tunnel is 130 yards long, 14 feet high, and 10 feet wide. 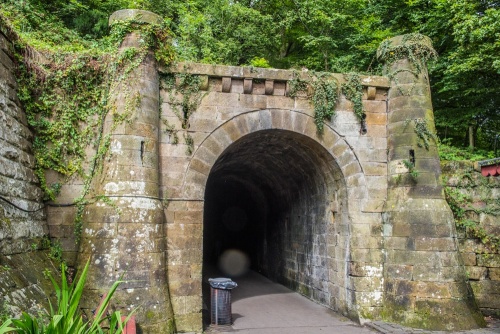 Another historic building in Grosmont has nothing to do with the railway. It is the Old School, a Victorian building that now serves as a popular coffee shop. Near the station is the Station Tavern, built as 'The Tunnel Inn' in 1835 for the Whitby and Pickering Railway Company. It was the first purpose-built railway building.

Grosmont is on a minor road off the A169 about 4.5km (3 miles) south-west of Sleights. There is a National Park pay and display car park near the railway station. Of course, a more picturesque way to visit Grosmont is to take the NYMR from Pickering, which passes through some of the most spectacular scenery in the National Park. 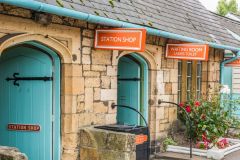 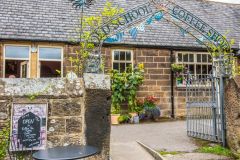 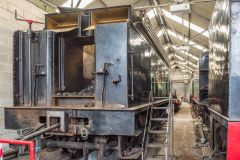 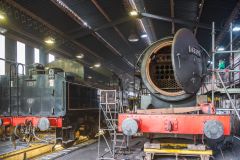 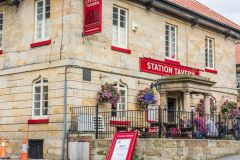 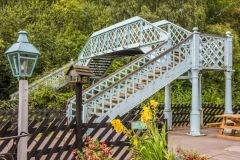 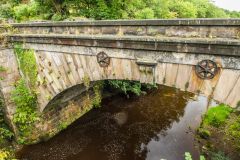 More self catering near Grosmont

More bed and breakfasts near Grosmont

Self Catering near Grosmont