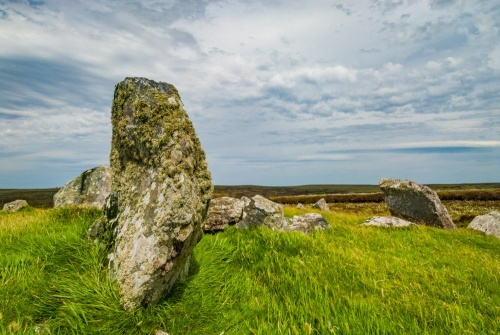 The cairn, also known as Cnoc nan Dursainean, was erected roughly 4,000 BC. Unusually, it appears to have been constructed to a square plan rather than the typical rounded or circular shape. The mound is roughly 19m across (62 feet) and has what appears to be a concave forecourt at the southeastern end. 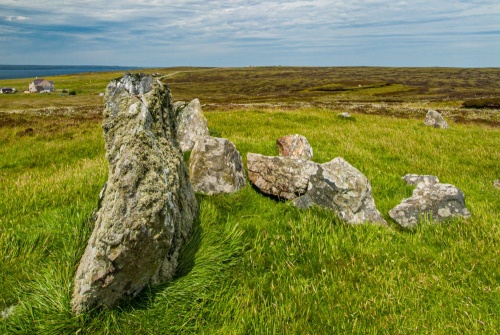 Within the mound was a burial chamber reached by a passage oriented towards the south-east. This alignment coincides with the midwinter sunrise. The central chamber was shaped by four corner stones ranging from 2.5' to 3.5' high, topped by a capstone 4.5' long x 3.5' wide. This capstone has fallen.

Kerbstones still stand at three corners (the northern corner is missing). These kerbstones are roughly triangular in shape and taper to a point.

Though many of the stones have been robbed to build nearby houses, enough remains to make the site worth visiting. A short distance to the north-east is Clach Ghlas standing stone.

Dursainean and Clach Ghlas together form part of a signposted archaeology walk beginning and ending at the end of Graham Avenue (Slighe nan Greumach) in Garrabost. 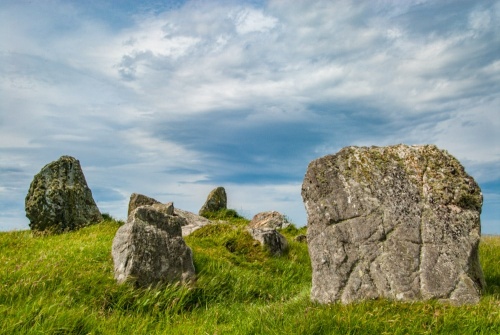 The cairn from below

From Stornoway take the A866 to Garrabost. You pass the post office on your right, then turn into Graham Avenue, again on your right. This turning is signposted with a brown tourism sign labelled 'Dursainean: Garrabost Circular Route'. Take Graham Avenue almost to the end where there is a small parking area on the left.

There is an information panel at the car park, beside the start of a signposted walking trail indicated by wooden posts with blue markers. The trail skirts the last house on Graham Avenue and passes over a stile before climbing the low hill that rises north of Garrabost. You will find Dursainean Chambered Cairn at the top of the hill. 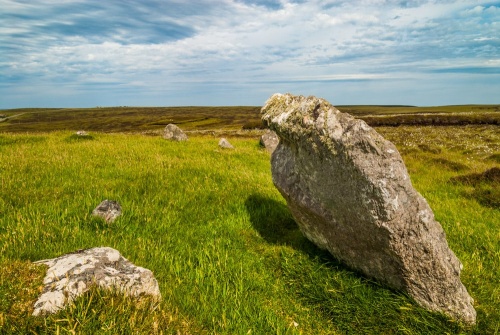 From the cairn, the trail heads north-east, through another stile, through a boggy patch of ground, and along Allt na Muilne to the solitary standing stone of Clach Ghlas. The track leads back to Garrabost, where you turn left on the A866, past the Church of Scotland parish church, and make your way back to Graham Avenue.

From start to finish this circular route is roughly 1.5 miles (2.5km) and will take no more than one hour.

I found Dursainean an intriguing site. The location is wonderful, with excellent views over the relatively flat landscape from the top of the low hill. It is interesting to imagine what the cairn would have looked like before the stones were robbed for local building projects.

Nearby accommodation is calculated 'as the crow flies' from Dursainean Chambered Cairn. 'Nearest' may involve a long drive up and down glens or, if you are near the coast, may include a ferry ride! Please check the property map to make sure the location is right for you.