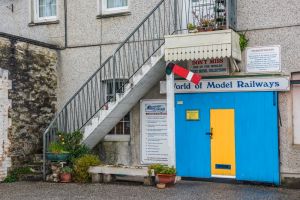 World of Model Railways Exhibition
Is someone in your family interested in trains? Oh boy, is this ever the place to visit! More than 30 OO gauge model trains make their way along a maze of layouts. But watch out: the indoor Garden Railway shows you how to transform your own back garden to run large scale trains.

Over 30 trains run through exceptionally detailed landscape settings that including numerous moving parts such as fairground rides, cable cars, and even a chimney sweep! One nice touch is that there are several train layouts at floor level so that younger visitors can see better.

Scenes include a Cornish tin mine, engineering works, a harbour, townscape, even an Alpine skiing scene. Interactive buttons let visitors add sound. lights, and action to the scenes. 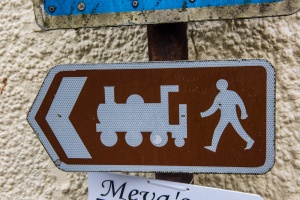 A signpost to the railway exhibition

A special exhibit is the Garden Railway setting. Despite the name, it is not outdoors, but a scale model of a back garden train layout meant to inspire visitors by showing how they can create a large scale railroad in their own gardens. Younger visitors can take part by pressing 'Thomas's Very Useful Button' to make Thomas the Tank Engine appear.

One exhibit showcases the story of Mevagissey own locomotive, built by Hornby, which gained recognition in the Guinness Book of World Records for the longest continuous run. Model locomotives on show are both modern and historic. See an Oriental Express, London Transport, military trains, narrow gauge, and more. If it's anything to do with model railroading, you stand a good chance of finding it here.

Along with the train displays is a very comprehensive shop selling model stock in N, OO, 009, HO, HOe, and O-16.5 scales, along with specialist narrow gauge modelling equipment and a wealth of railroad publications.

Trains run daily from spring through autumn, then on weekends and school holidays in winter. The museum has been featured on both ITV and BBC television.

More self catering near World of Model Railways Exhibition >>

More bed and breakfasts near World of Model Railways Exhibition >>