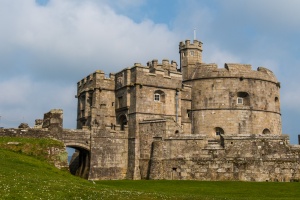 Built on a magnificent natural harbour at the mouth of the Fal estuary, Falmouth has a deserved reputation as a popular seaside resort and international boating centre. Much of the architecture is late 18th and early 19th century, though the popularity of Falmouth among the sailing fraternity has led to a plethora of new building.

The foremost attraction, aside from the sandy beaches that surround the town, is Pendennis Castle, built by Henry VIII on a headland outside the town. Pendennis faces St. Mawes Castle across the Fal. Both were built as part of Henry's extensive plans to defend the south coast against perceived threats from France and Spain.

Within the town, the most interesting building is probably the King's Pipe, used to burn smuggled tobacco in the days when smuggling flourished in Cornwall. The Cornwall Maritime Museum traces the proud seafaring history of the region, and visitors can take pleasure boat cruises around the Fal estuary and up the river.

The Falmouth area is blessed with a mild climate all year round, making the area ideal for growing a wide variety of tender plants, including varieties rarely seen in Britain. Fox Rosehill Gardens, for example, features banana trees, growing healthily in the open air! There are four major gardens in Falmouth itself (Gyllyndune, Kimberley Park, Fox Rosehill and Queen Mary), as well as three near the town (Trelissick, Glendurgan and Trebah).

More self catering near Falmouth

More bed and breakfasts near Falmouth

Self Catering near Falmouth