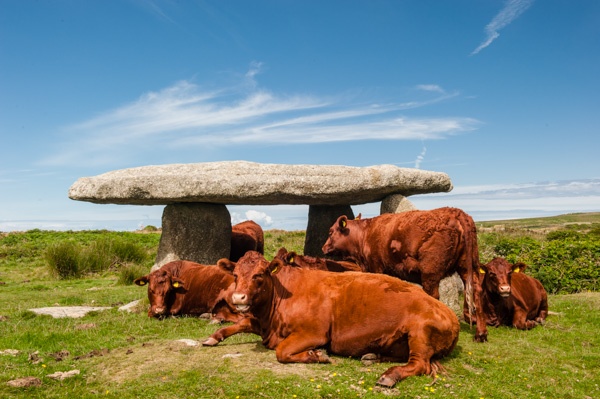 Lanyon Quoit acting as a sun shade for local cattle

The quoit consists of one large stone supported upon three standing stones. It is likely the remains of a long barrow, or chambered tomb, and would have been covered with turf. It is difficult to draw conclusions about the purpose of the quoit, or even its original appearance; it was the victim of well-meaning attempts at restoration in the early 19th century.

At that time the capstone was rotated, and the uprights altered to support it. In the process, the quoit was lowered considerably. A commentator writing in the late 18th century claimed that at that time a horse and rider could pass comfortably beneath it! 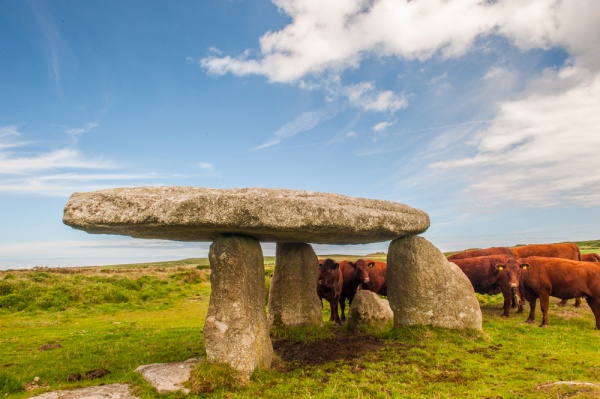 Looking inside the quoit

Despite these alterations, the quoit is an imposing monument. The capstone alone weighs over 13 tons. The remains of the barrow can be seen, running for 27 feet on a roughly south-north axis. It may originally have been as long as 60 feet in length. A conservative estimate puts the time of the quoit's erection at 2500 BCE.

Another name for the quoit is Giant's Table, or Giant's Tomb. This relates to the local legend that a giant's bones were found in the tomb. The area is rich in standing stones and other prehistoric sites of interest. Men-an-Tol is close by. 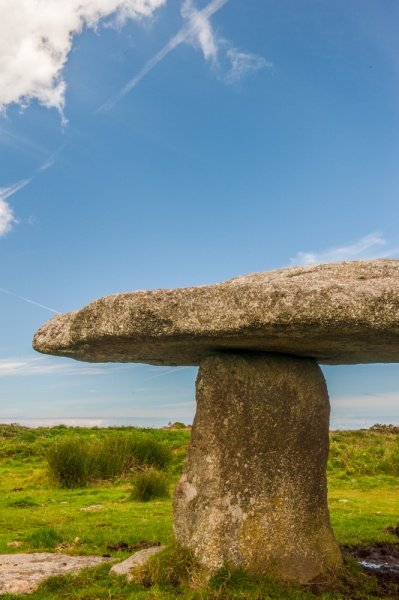 The capstone and an upright

Visiting Lanyon Quoit
Parking is a bit of an issue; the narrow country lane that passes Lanyon Quoit was simply not made for parking. There are a couple of small passing place lay-bys on the north side of the road (heading east), but neither is signposted.

There is a small, rather invisible signpost by the hedge that screens the quoit from traffic along the lane, but it is very easy to miss it completely. This is one of those historic sites that may require several trips back and forth - first to figure out exactly where it is, then to find a good layby to pull into.

My best estimate at the location along the lane where you can find a layby to park is Grid reference SW429336. Good luck!

I would be remiss not mention footwear. The quoit is in a farm field. Lest that not be graphic enough to sink in, let me put it another way; lots of animals use the field and leave evidence of their passing behind. Wear good footwear and watch your step; you have been warned!

Not only do cattle use the field for grazing; if the weather is hot they find the quoit an ideal shelter from the sun, so you may find a small herd of cows seeking shade under the stones, and from my experience, they aren't really keen to move off. They aren't dangerous, but it's a good idea to keep dogs on a lead, or better yet, leave them in the car.

More self catering near Lanyon Quoit