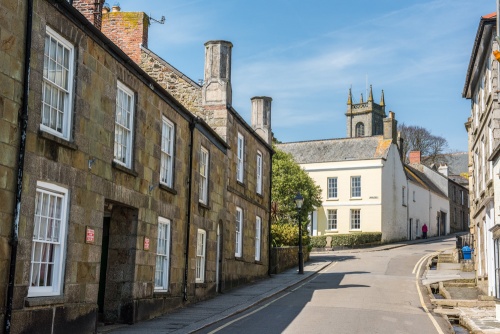 Helston is a lovely old town, one of the five "stannage towns" of Cornwall, where tin was brought to be weighed, taxed, and stamped before it was allowed to be sold. The prosperity that the tin industry brought to Helston is remembered in the name of Coinagehall Street (coigne being the name for the corner of a tin ingot that was cut off to be assayed for quality).

Centuries ago Helston was a thriving port, but in the medieval period, the mouth of the Cober River began to silt up, creating the shingle bank called Loe Bar, which effectively closed off Helston and made the largest freshwater lake in Cornwall. The banks of the lake are blessed with a variety of attractive walking paths, making this a popular spot for day trips. 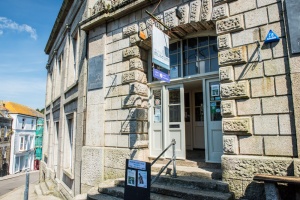 Helston Museum (formerly the Helston Folk Museum) is situated behind the Guildhall. The museum is crammed with memorabilia tracing the history of the town from as far back as the Bronze Age. The museum is like Dr Who's Tardis; it seems small from the outside, but once you go inside it seems there is no end to the displays.

One thing that caught our eye was a huge timber cider press brought from the Trelowarren Estate. One unusual exhibit is the walking stick used by the famous Cornish engineer and inventor Richard Trevithick.

There is a fascinating museum exhibit on the annual festival of Flora Day and the Furry Dance. Each May the town hosts the Flora Day festival, believed to have originated in the pre-Christian era. The town is decorated in green boughs, hazel, and local bluebells, which flourish wild in the area. Traditional dances and general revelry last all day, interspersed with more typical modern fair booths and amusements.

Students of Cornish folklore are well acquainted with Helston! It is the scene of the annual "Furry Dance", held each year as a part of Flora Day. The dance begins as a stately procession with gentlemen in coat and tails, ladies in their finest dresses, and children clad all in white.

The procession takes a circuitous route, even passing through shops, homes, and private gardens as it wends its way through town. Revellers sing the "Furry Song", which makes reference to Robin Hood and Little John, St. George and the Dragon, St. Michael, and Aunt Mary Moses. In some versions, there are also rude references to the French!

The dance is believed to be a remnant of a pagan celebration of Spring, and local legends say that the dance was also used to frighten away the devil! The name "furry" is believed to originate with the Latin "feria", which means holiday, or the Cornish word fer, for fair or festival. The Furry Dance is generally held on May 8.

The Folk Museum has a very useful free brochure outlining the Helston Town Trail around the town centre, linking historic buildings. Our family enjoyed the walk, and we thought it might be useful to share the highlights here. 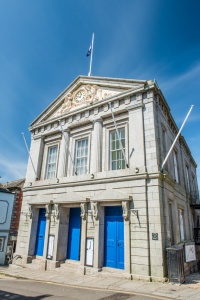 Guildhall
The walk begins at the Guildhall, just a few steps from the Folk Museum. The present building was erected in 1839 on the site of the old market house. Within the elegant early Victorian building are the Mayor's Parlour, Council Chamber, Town Clerk's office, and a large function room that was originally the Corn Exchange. The annual Furry Dance begins outside the Guildhall. 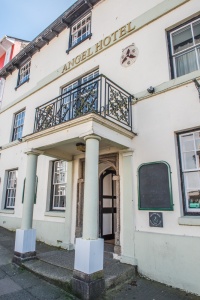 Angel Hotel
At the top of Coinagehall Street stands this historic hostelry, dating to the 16th century when it served as the town house of the wealthy Godolphin family. Legend says that the inn is named after the Archangel Michael, who defeated the Devil. The hotel has been used as an excise house, a prison for smugglers, a tax office, and posting house. 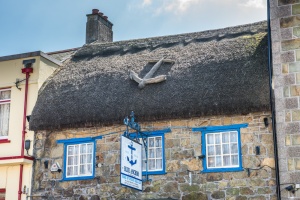 Blue Anchor Inn
Further along Coinagehall Street is this picturesque medieval thatched inn, which began as a rest house for monks and was converted into a pub in the 15th century. Look for the thatched outline of an anchor on the roof. The Blue Anchor maintains possibly the oldest private brewery in Britain, brewing an ale known as Spingo behind the pub, next to an old skittle alley. Directly opposite the inn stood the Coinage Hall which gave its name to the street. 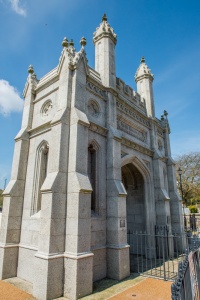 Grylls Monument
At the bottom of Coinagehall Street is a striking monumental gateway, erected in 1834 in memory of Humphrey Millett Grylls, a wealthy banker who helped save the local Wheal Vor mine and preserve 1200 jobs. The cornerstone of the ornately carved memorial incorporates a vellum copy of a eulogy for Grylls written by Revd Derwent Coleridge.

Behind the memorial is the town bowling green, one of the oldest in England, first laid out in 1764. The bowling green stands on the site of Helston Castle, originally an earthwork enclosure, rebuilt in stone for Edward, Earl of Cornwall in the 1270s. The stone castle was ruinous by 1478 and no trace of it now remains.

A short walk brings you to Lady Street, where you pass Leslie House, built in 1810 for a successful tin merchant and used by the Women's Land Army in WWII. Further along the street is the Masonic Hall, built in 1827 as the Commercial and Mathematical Academy, housing 60 pupils. From Lady Street turn onto Cross Street, an avenue of elegant historic buildings. 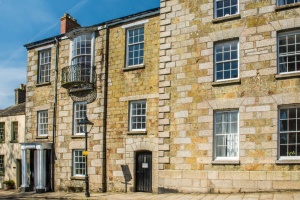 Great Office
A No. 5 is the Great Office, easily recognisable by an ornate balcony on the second floor. The building was erected in the early 18th century and was the home of Helston's earliest banks, and later housed the registry office. It was here that local miners came to be paid. Opposite Great Office is a cast-iron water pump built in 1844. It stands outside Lismore House, an early 19th-century house built for Glynn Grylls, seven-time mayor of Helston and brother of Humphrey Grylls. 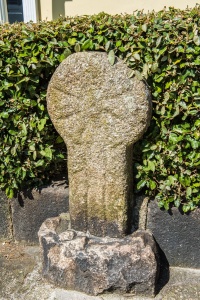 The Maltese cross
on Cross Street

At the end of Cross Street you will see a Maltese Cross of stone set into the hedge. It is this cross that gives the street its name. Opposite is The Willows, a late 18th-century house that was once the home of Sir Henry Toy, a wealthy foundry owner. It later served as district council offices.

From The Willows you can climb Church Street, past the former National School, erected in 1828. The boxing champion Bob Fitzsimmons, who was born in Helston, used to train in the school hall. 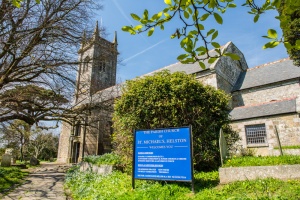 St Michael's Church
Just beyond the National School is the parish church, dedicated to St Michael. As you climb the steps to the churchyard look for a medieval cross in the war memorial to the left of the steps. Outside the church entrance is a memorial to Henry Trengrouse, a cabinet-maker from Helston who invented the 'Rocket' apparatus to launch a life-saving line to ships in distress.

hough largely unknown in his own country, Trengrouse was honoured for his invention by the Tsar of Russia, who gave him a diamond ring. His invention saved countless lives, but Trengrouse had to pawn the ring when he fell into financial difficulties, and he died penniless. 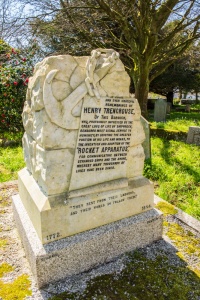 The church itself began in the medieval period, but the present building was erected in 1756 by Lord Godolphin. The interior is delightfully elegant and spacious, with ornate Georgian plasterwork and a large west gallery.

From St Michaels retrace your steps back down Church Street to No. 15, which stands on the site of the former New Inn. This quiet spot was the scene of a bloody murder in 1548 when a royal commissioner named William Body was stabbed to death.

Body was authorised by Henry VIII to strip churches of any Catholic artefacts. He first dealt with the church at St Keverne before moving on to Helston, where he was met by an angry mob and killed. Lord Godolphin had the ringleaders of the mob arrested, along with the priest of St Keverne, and all were hanged, drawn, and quartered at Tyburn in London. 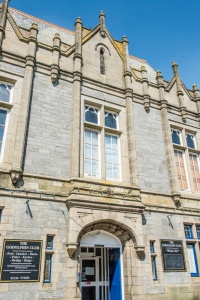 Godolphin Hall
On Wendron Street, just a few minutes from Church Street, is Godolphin Hall, built in 1888 and home to the Godolphin Club since 1976. 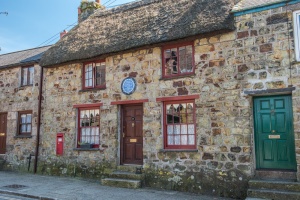 Birthplace of Bob Fitzsimmons
A bit further up the street is a picturesque thatched cottage that was the birthplace of boxing champion Bob Fitzsimmons, probably the most famous native of Helston. Fitzsimmons was a champion in three different weight classes and the lightest ever heavyweight title holder. He is also considered one of the hardest punchers in boxing history. 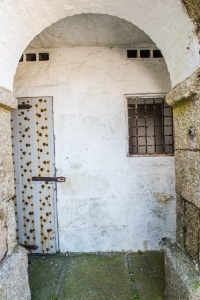 Borough Prison
Just past the cottage is Shute Street, where you will find the tiny Borough Prison, built in 1837 and still boasting its iron-bolted doors. There were 8 cells; two for daytime use and six for overnight 'guests'. The gaoler and his family lived above the cells. You can peer into a cell through an iron grill and be thankful you were never incarcerated there!

Nearby
RNAS Culdrose is situated just south of Helston. Culdrose is the largest helicopter base in Europe and is the site for the annual air show in July. Another nearby attraction is Poldark Mine, where you can go down into an authentic Cornish mine and view a recreation of a miner's village.

More self catering near Helston

More bed and breakfasts near Helston